There is only one consistent advocate on behalf of all citizens to keep more of their own money in their own pockets- the Libertarian Party. Republicans and Democrats are inconsistent on this at best, and more often, are leading the charge to do what they can to take money away from you by raising taxes.

This was enormously evident yesterday in Hamilton County, where only the Libertarian Party bothered to send representatives to both the joint retreat of the County Council and County Commissioners and to the County Council meeting later in the evening.

The value in these appearances is that the elected officials, all Republicans, knew that they were on the spot. They knew that there was someone taking notes, observing their direction either towards or away from new taxes. When I spoke on record in opposition to the proposed food & beverage tax, I raised the stakes. I reminded the County Council that four of them would be up for re-election in 2006, and that the Libertarian Party would eagerly look forward to running candidates against those who were on record voting for any new tax.

Later in the meeting, the vote was taken on the proposed additional wheel tax. This is a tax that I spoke on the record before the Council in opposition, back in early May. Knowing they were on the spot, the Council defeated the wheel tax, 5-1. Notably, all four Councilors up for re-election in 2006 voted against the tax.

It gets interesting from here. The County Council so want to be Governor Daniels' lap dogs. They want to do anything they can for him. When they spoke about the proposed food & beverage tax, they spoke about it in the past tense, as though it had already passed. However, it hasn't passed, and they know that they will again be put on the spot by the Libertarian Party. The Councilors will be made uncomfortable. We will see how uncomfortable. Uncomfortable enough to remember that they serve the citizens of Hamilton County and not the Governor?

The Governor is coming to Hamilton County on Tuesday, June 7 for a 5:30pm Town Hall meeting. It's a nice, inconvenient time, certain to attract the smallest attendance possible during the dinner hour. That's ok. The Libertarian Party will be there, again as the only reliable, consistent advocate for the taxpayers.
Posted by Mike Kole at 9:45 PM No comments: 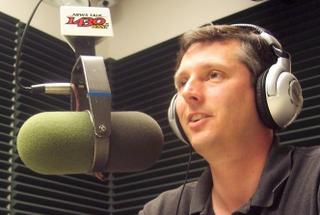 I love it when a plan comes together. I began the day as a guest on WXNT 1430-am, talking Hamilton County politics and Carmel bond issues on the Abdul In The Morning show. From there, I discovered that the Star got around to running my letter on the smoking ban, and then the Noblesville Daily Times ran my column on the Hamilton County budget.

As the Hamilton County Councilors and Commissioners head to their joint retreat Wednesday afternoon, they might consider some ideas for solving the County's budgetary woes.

After the Council made a very commendable round of budget cuts, the County's deficit was reduced but not eliminated. The attempts to cut appear to be complete, which means that the next efforts to balance the budget involve increasing taxes.

At the County Council's last meeting, I took the opportunity to address the Councilors on the issue of a proposed wheel tax, and in response to my comments,
two challenges were issued to me:

What would you have us do? Cut the Sheriff's Office or other safety forces?Look at the budget. You won't be able to find any additional cuts to make without layoffs.

I would not advocate any cuts to the safety forces. Safety forces are always a government's top priority. Everything else should be subjected to deep cuts before even considering minor cuts to safety forces.

Additional cuts are possible without a single layoff, and without a single reduction in salary. Having obtained a copy of the 2005 budget, I examined it carefully, with a strict prioritization of needs:

No cuts to safety forces or courts.
No salary cuts or position eliminations.
Question those things that do not appear to be a core function of government.

Can the Council consider cutting all overtime? If all overtime were cut, almost $241,000 would be saved.

Can the Council consider cutting the budget item "Other Travel" from the Auditor's office? If this item were cut, $10,000 would be saved.

Can the Council consider cutting landscaping and lawn maintenance? If so, the county would save $54,000.

Areas such as these seem like opportunities for innovation. For instance, couldn't the county conduct a bidding for landscape contractors to provide these services at their cost in exchange for advertising? The payoff could be signs that read, "Lawn care services provided by ABC Landscape Company."

These are items where, if full cuts were enacted, would yield a significant savings — more than three-quarters of a million dollars. And yet, it still does not bring about a balanced budget.

The purpose of the joint retreat is to discuss capital projects. These projects tend not to represent absolute needs, such as safety forces are. These projects can certainly have the effect of enhancing life in our county, but without them, it is unlikely that life here will suffer.

The most startling line item in the budget is found in the county general fund: "Land Acquisition." This item features a $16 million allocation. This amount represents more than a quarter of the county's total budget.

The County Council could ignore all of the cuts suggested above simply by cutting this single line item in half. Doing so would actually create a budget surplus. No wheel tax necessary. No 1 percent food and beverage tax required.

An allocation as large as this should be subject to sharp scrutiny. It should be fully justified as a need in today's budgetary climate. This can be shown easily enough in the case of acquiring additional land to support new bridges that are being built to replace old ones that were crumbling and of insufficient width besides. $16 million buys a lot of right-of-way. What is this money allocated for?

If this is a time of budgetary crisis, and the rhetoric heard from these Republican county officials suggests that it is, then pet projects should be the first put on the chopping block — not items of essential need, such as safety forces or courts. It seems that the priority list has been upside down to date.

It would be a wonderful thing to see this budget balanced without an increased tax burden. Imagine balancing the budget on cuts and then getting word that the COIT issues have been resolved. With the money coming back to the county from the state, the Council could begin discussing raises for county employees instead of layoffs, look at lowering the tax rate, or begin those pet projects.

I believe that the majority of Hamilton County residents are fiscal conservatives who would prefer to see more cuts before more taxes. I urge the County Councilors and Commissioners to re-examine their spending priorities and to balance this budget as fiscal conservatives.

The most regrettable thing about the smoking-ban ordinance was that it created an either/or choice between public health concerns and the right of business owners to set their own policies within their establishments.

The Star's May 25 editorial praising passage of the ordinance was equally lamentable. It justified stomping the rights of business owners on the basis that those rights have been curtailed before by having to post exit signs and conform to other regulations. Following The Star's logic, it would be acceptable to trample First Amendment rights, or any other civil rights, so long as they have been trampled before and a health issue could be conjured to justify it.

It would have been significantly better for the health of liberty in Indianapolis had the council and The Star resolved to ramp up educational campaigns to persuade changes in behavior rather than to promote forced obedience.