Build It And They Will Come, Eh?
(Crawfordsville, IN)- One of the current 'stimulus' spending targets is high-speed passenger rail service, and as a railfan, it caught my attention that one corridor singled out for attention is Cincinnati to Chicago, through Indianapolis. From an Indy Star report:

The administration identified the corridor linking Chicago, Indianapolis and Cincinnati as one of 10 where the president wants to see efficient train service zipping along at 79 mph to 150 mph.

Dennis Hodges of the Indiana High Speed Rail Association said passenger routes from Indianapolis to Cincinnati and Chicago now run at about 45 mph; upgraded tracks and trains would raise that speed to 110 mph.

Crawfordsville in on that current route. Amtrak currently serves this run, so I thought it might be meaningful to look at its' current standing. From Amtrak's website:
One can currently commute from Crawfordsville on Amtrak's Cardinal #51 train. It departs Crawfordsville at 7:28am, and arrives in Chicago at 10:35am, all times local. The cost is $19 for a regular coach seat. Coming home, Hoosier State #850 departs Chicago at 5:45pm and returns to Crawfordsville at 10:35pm. The return trip is another $19.
Pretty workable, if you have a late starting work day. It's a long day, but what else would you expect, commuting from 150 or so miles away? These are the only trains that pass through all day, in either direction, so do make sure to be on time!
How many people ride? Hard to say definitively, but here's the evidence I could collect in the late morning: 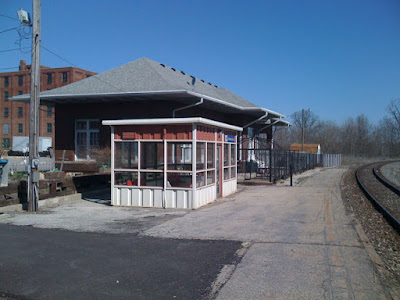 Amtrak's current station is the thing that looks like a bus shelter, standing here in front of the old Monon RR station, that is now the home to a massage therapist and other businesses. There is no staff here: No ticket agent, no porter. There isn't even a rest room. 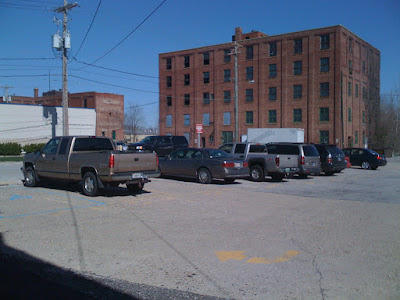 Amtrak's dedicated portion of this parking lot in Crawfordsville has 12 spaces. 5 are occupied by commuters. One is my car.
Who knows? Maybe there is a lot of walk-up ridership. Maybe each vehicle had seven people carpooling. Maybe, though, people choose not to ride.
The National Association of Railroad Passengers has statistics on Amtrak's various routes. According to NARP, 31,099 fares rode the Hoosier State in 2008. See pg 37 of NARP's factsheet. For comparison? According to the most recent (2002) INDOT count, the least travelled part of I-65 north of Indianapolis saw 26,330 vehicles PER DAY.
I know how it goes with these programs: If they had a lot of riders, it would stand as proof of the public's support and therefore the worthiness of public funding. As it shows few riders, it's proof that if only the service were upgraded- made to run faster, in this case- surely more people would ride. No matter what, though, shovel more money at it.
There is no comparing Europe's high-speed rail to American passenger service. I've ridden Spain's AVE train from Madrid to Sevilla, and it's a hoot. It runs at about 180mph. Total trip time is about 2 hours. What makes it different is that the rails are dedicated solely to the AVE train. No slow passenger trains to clog the rails with, and no freight trains.
In the US, and on the former Monon at Crawfordsville, the rails are owned by the freight companies, here, by CSX. Passenger service is second fiddle. The railroads had been trying to rid themselves of passenger service from the 1950s until finally in 1971 Amtrak was formed. Until then, the federal government forbade American railroads from eliminating passenger service, forcing those companies to operate these trains at a loss for years or even decades.
The Administration's plan is to upgrade the rails on existing routes. Well, that's nice. I'm sure the freight railroad will appreciate that gift. But it doesn't change the fact that the freight trains still take priority over passenger trains. Do this math for me: A passenger train capable of 200mph is going to go how fast if trailing a freight train going 35mph?
So, what are we going to do? Kick the freight trains off their own tracks? Build new dedicated corridors? Anybody think that land acquisition through Chicago will be easy or cheap?
Notice, I haven't even begun to talk about the operational subsidies that allow Amtrak to survive. A quick look at Amtrak's balance sheet shows that passenger fares barely cover salaries and benefits to Amtrak employees, and don't even cover bothersome things like train operation (you know, the core of the enterprise), or fuel.
In 2007, Amtrak lost more than a billion dollars. Who ate that? We did. Those of us who don't even ride.
Posted by Mike Kole at 8:35 AM No comments: Links to this post

Kole At Hoosiers For Fair Taxation

I have accepted Melyssa Donaghy's invitation, along with Indianapolis City-County Councilor Ed Coleman, and recent Congressional candidate Sean Shepard to contribute to HFFT. Here's my first post there:

Many thanks to Melyssa for her invitation to me to contribute to Hoosiers For Fair Taxation while she takes a breather.

HFFT is one of the blogs I have long linked to on my own blog, Kole Hard Facts of Life, because I value the perspective that so long as we have to have taxation as a necessary evil, for the funding of government (another necessary evil), it should at least be fair, and above all, taxation should be prioritized such that the proper functions of government are funded first, and everything else last and least, or in a better world, not at all.

Not a single day goes by that I see a news account of government funding something that, in a better world, would be funded exclusively by private funds. Today's example come from an Indy Star report:

Hundreds of Hoosiers braved patchy rain and cool winds swirling around Monument Circle at noon Monday to rally in support of the arts.

Known as "Indy Culture Matters," the rally was organized by the Indianapolis Consortium of Arts Administrators to raise the public profile of cultural institutions and their value, particularly amid the economic crisis.

John Pickett, executive director of the Indianapolis Opera and vice president of the consortium, acknowledged last week that in addition to simply raising awareness, the rally stemmed from frustration at the level of financial support given to the arts in Indianapolis.

This year, for instance, the Arts Council of Indianapolis received $1,870,000 from the city budget and the Capital Improvement Board in public funding for the arts -- a decrease of $673,500 from 2008.

Pickett is frustrated? Nearly $1.9 million received for something that is nothing like a proper function of government? And, at a time of economic downturn? I believe the phrase you're looking for is 'Thank You".

The more I learn about the Capital Improvement Board, the more I have come to believe it should be eliminated entirely. What about art is a 'capital improvement'? I think the time has come not merely for the CIB to explain itself on selected spending misadventures, but to justify and explain its' very existence.

Art is a wonderful thing. It's also a personal thing, a personal expression of the individual artists, whether painters, sculptors, stage performers or musicians. It is absolutely wrong to take the money from the community as a whole to fund the personal expressions of select artists of political favor. You see, a great deal of art is supported very fabulously commercially. But the various arts that line up at the public trough tend to be the favorites of yesteryear, lacking the ability to attract enough willing support, i.e.: customers, so they turn to political favor instead, where they need not be popular to support themselves, just popular enough to sway a weak-kneed politican or two.

Mr. Pickett, you have raised my awareness. Now I wish you less public money for 2010 than 2009, and in a better world, none. Please consider approaching those who claim to value the various arts, and ask them for their personal expression of support, in the form of a donation, leaving the pockets of those who don't unpicked.
Posted by Mike Kole at 8:23 AM 1 comment: Links to this post

The Kole Garden
For the benefit of my old hockey teammate Colin Sikon, here's the visual proof that there really is a garden, and that I'm not merely a great fiction writer. Goalies always are a little odd. 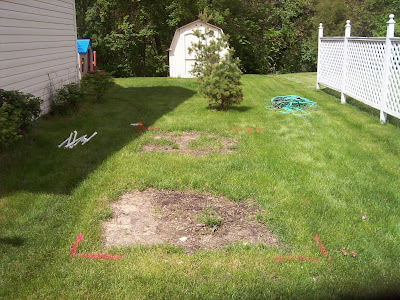 The reason I decided to build a raised garden was that when our property was developed, the topsoil was scraped off and sold, rather than stored and replaced. I was planting into clay. The carrots couldn't push through the soil at all. 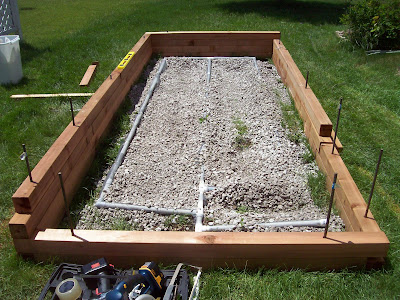 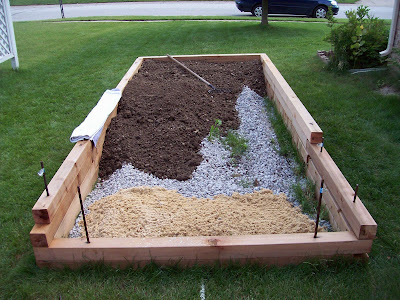 Sifted topsoil, although I added sand at the north end, for the benefit of the cucumbers. 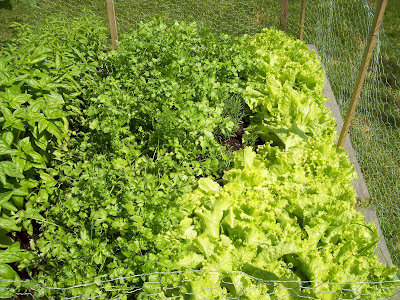 Lettuce, cilantro and basil, after five weeks. The rosemary is crowded out between the lettuce & cilantro.
The big downfall last year was that my work travel schedule was still heavy, and I built the raised bed over several weekends. I didn't plant until July 1! The lettuce was bitter, and the carrots didn't mature until November. I had to water furiously, starting plants in the height of the summer heat.
Having planted on time this year, I'm hopeful for better lettuce. Thing is, I don't know how much better I could hope for anything else to be. That beautiful topsoil made such great produce last year! I had never eaten tomatoes or carrots so delicious. Well, my friend Greg McNair grew awesome tomatoes at his farm up in NW Indiana, and made the most incredible pizza with homemade sauce and sliced several varieties of tomatoes to top it. That was pretty great, too.
Posted by Mike Kole at 9:31 AM 2 comments: Links to this post