I received a couple of emails asking about the Comcast Candidate Show in Marion County. What did you talk about? When will it air? These are easy to answer!

Comcast tells us, "There will also be promotional spots on other more popular channels to draw viewers in". Sounds like an excellent plan.

Hello, my name is Mike Kole.

I am the Libertarian candidate for Indiana Secretary of State.

As your Secretary of State, I will work to ensure fair elections, and to improve upon the dismal turnout we’ve seen in recent years at the polls.


We need to end the practice of gerrymandering districts to protect incumbents.

Did you know that 44 of the 100 House seats will be unopposed this November?

And that 9 of the 25 Senate seats will also be unopposed?

This is the result of gerrymandering- drawing districts to ensure that Democrats will win some seats, Republicans will win others, leaving them to contest just a handful. It leaves voters uninterested in elections, and makes elected officials unaccountable. It leaves independent voters without a choice.

Gerrymandering is bad for representative government, and needs to be ended.


Hoosiers need to have faith in our voting machines.

It’s a shame our state spend millions of dollars buying machines that are not equipped with this available technology.

Voter verifiable paper audit trail machines have a printed paper that accompanies the electronic voting. The voter can see that the votes match on paper and on the screen. They leave the voting booth confident that their vote was accurately tallied.

As Secretary of State, I will lobby the legislature to purchase machines with this technology.


Hoosiers need to be encouraged to vote in our elections.

The turnout for the 2006 Primaries was embarrassing, with a mere 23% of voters casting ballots statewide.As the top elections official, the Secretary of State should actively urge Hoosiers to vote.The current Secretary of State spent $1.2 million in ads promoting voter ID, but spent nothing urging Hoosiers to vote. That’s a case of misplaced priorities. Let's make sure Hoosiers are getting to the polls first, then we can worry about checking the ID.

Per Indiana Election Law, the Libertarian Party of Indiana’s ballot status is tied to my outcome in this race. If you believe in smaller government and lower taxes, and you find that the other parties fail to deliver this to you, or if as an independent voter the Republicans and Democrats do not represent your views, please cast your vote for me to ensure that the Libertarian Party stays on Indiana ballots for the next four years.

On November 7th, please vote for me, Mike Kole, Libertarian for Secretary of State.


It wasn't like buying TV time, where you have complete direction control, so I'll look forward to seeing how this came off, and how my presentation stacks up against the other candidates.
Posted by Mike Kole at 9:20 AM 2 comments:

Report From The Trail

No, not the Adirondack Trail, sadly. I'm so glad we took the family trip to the Adirondacks in August, because rumor is I will get to sleep a little bit over the next two months. It's just a rumor so far.

That's good, though! It means I'm very busy campaigning and sitting down with the media.

Tuesday: Met with the Indy Star Editorial Board, comprised of columnists Jane Lichtenberg and Dan Carpenter, plus Editorial writer Tim Swarens. This went very well. Carpenter has developed a keen interest in ballot access issues, and I have plenty to say about that. All three were interested in my position on the gerrymandering of districts in Indiana. I almost felt that the time wasn't contentious enough. Could it mean an endorsement? I'll be eager to see what is fit to print in the Star's candidate guide.

I later met with Nikki Kelly of the Fort Wayne Journal Gazette, down in the Statehouse basement. She really covered a lot of ground with her questions, including much about my reactions to the current Secretary of State's performance, recent press conferences and statements. I had some fun commenting on the Securities Division's new Newlyweds' Guide. I will also look forward to see what Ms. Kelly writes as the election draws nearer.

That evening, I attended a sloppy joe supper to benefit the Concerned Citizens of Home Place, who are fighting Carmel's unwanted attempt to forcibly annex the area. Isabel was a big hit eating sloppy joes. I was delighted to see Matt Milam wearing an NK Hurst "I Helped Save The Bean Plant" t-shirt. He gets the correlation between forced annexation and eminent domain abuse both as affronts to property rights and self-determination. Met many residents who were pleased to know that there are candidates who support their position. Also ran into David Orentlicher, the Representative for House Distrct 86. I had a great conversation with him, asking if he would be willing to sponsor legislation outlawing the practice of forced annexation in our state, and he said that he would! I would love for Libertarians to back David and any other legislators who will sponsor such law, as we did with the eminent domain law put forward by Dave Wolkins in the House and Senator Jeff Drozda.

Wednesday: Comcast was taping candidate presentations that will be aired systemwide on a program featuring the candidates who will be on the Marion County ballot. With my radio background, I'm always confident in my spoken delivery. TV's a different game, though. On my first take, I was a little too focused on my TV delivery and tripped over a word. I felt the overall result was 95% right, so I asked if I could do a second take. Comcast agreed, so I ran through again. I really nailed it this time. Problem was, the videotape ran out as I finished my last sentence! This brought huge laughs in the studio, and I was given another take, which I was happy with.

The Indy Chamber Hob Nob event happened later in the evening, and unfortunately, it was crafted to spotlight the candidates for Marion County Prosecutor. It's an important position to be sure, but the narrow focus on the few contests that are extremely close leaves me flat. The other offices are no less important, and with the focus off so many races, the public is missing out on important and interesting dialogue. The opportunity to meet Chamber business owners and so many media personalities cannot be topped. I really enjoyed speaking with and campaigning to these folks. I met the Democratic candidate for SoS for the first time, which is pretty astonishing when I think that I've been to nearly 200 events. Actually, I encountered would-be Green Party candidate Bill Stant more times this year than the 'D' and 'R' combined: 3 to 1.

After the Hob Nob, I joined the monthly Libertarian After Hours party a few blocks over at Bearno's. There was still a group of about 15 left when I got there, and conversation covered a wide range of topics, from Iraq to religion to all the nutty conspiracy theories proliferating about the events of September 11. We could really distribute a lot of tinfoil hats, I'm afraid.

Side Note: I was really disappointed at two things that happened at the Hob Nob. Someone made off with my display of golf balls towards the end of the night, even though I posted a sign saying that they were for display only. Also, someone trashed my display, using Democrat Joe Pearson's materials to cover all of mine. I have no belief whatsoever that any of Joe's people did this. I don't get why supporters of one political party would do something as childish and cowardly as to trash the materials of the candidates of two other parties. It really speaks poorly of whomever did it. This was the first time that anyone has treated me with disrepect on the trail in over two years of campaigning. I was really surprised and disappointed.
Posted by Mike Kole at 11:01 PM No comments:

Tuesday and Wednesday will be very busy and important days for the campaign:

I'll be working to earn the endorsement of the newspapers in these meetings. The Comcast taping is for a 2-minute presentation that will be shown repeatedly on the candidate show that cable system is airinig frequently in the run-up to the elections. The Hob Nob is one of the biggest political events of any election season, with more candidates for office from central Indiana in one room than at any other time.

I'm glad that I've pretty much gotten over the cold that has dogged me over recent days. Nobody presents well with the sniffles and a nasal voice. I will present well tomorrow and Wednesday!

Update: Add to Tuesday's line-up a visit to the Sloppy Joe Supper fundraiser held in support of the Home Place property owners fighting Carmel's attempt to forcibly annex them. 5:30-7:00pm, at the Orchard Park Presbyterian Church at the corner of 106th & Westfield.
Posted by Mike Kole at 1:07 PM No comments:

The national Libertarian Party has a new feature on its website, the Candidate Tracker. It ranks all the Libertarian candidates across the country in terms of their activity, scoring based on funds raised, public appearances, TV & print article appearances, and others.

Currently, the Kole Campaign is ranked #2 in the country! Click here to check the Tracker! Dr. Eric Schansberg, candidate for US Congress in Indiana District 9, is ranked #4.
Posted by Mike Kole at 7:41 AM No comments: 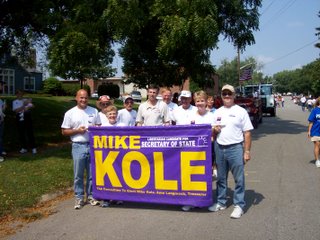 About 20 Libertarians marched and handed out candy to kids along the route. For my part, I ran back and forth across the National Road (US 40) and shook hands with everyone. 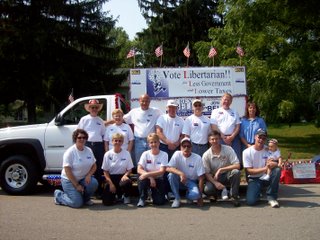 Big thanks to Rex Bell for the invitation to march, and to Ray Blevins and Marvin Heacox for carrying my banner along the route!