Yes, We're In San Francisco Now
(San Francisco, CA)- A notice was just slipped under the door by the hotel's management. It seems that there is going to be an anti-war rally and march very near to the hotel, and management wanted to let patrons know so that they could allow extra travel time.
I thought about it for a moment. March 21... Hmm... Why, that's the day the US began, not declared in the Congress, war against Iraq. So, I did a generic Google search on 'anti-war San Francisco' and turned up this link, for the sponsor of the event.
There are still references to President Bush as a 'war criminal'- one that is carefully worded to give President Obama a pass on that charge. Check out the language from their flyer:

The U.S. leaders who have initiated and conducted this criminal war should be tried and jailed for war crimes.
The war in Afghanistan is expanding. Robert Gates, Bush's defense secretary, who was kept at his post by President Obama, has announced that the troop levels in Afghanistan may double in the coming months. Both he and Vice President Biden predicted higher casualties in the coming period.

Amusingly partisan. If one official is a criminal for conducting a criminal war, how is another not a criminal for continuing to conduct that war? Nation of laws, not of men, folks.
Don't give Obama a free pass. He has been in office for 60 days now. He could have withdrawn the troops by now, if it were any priority to him. It obviously isn't. If he were an anti-war politician, he wouldn't be planning to expand in Afghanistan. He obviously isn't. If the left gives Obama a free pass, they will get delivery on anti-war issues in the same way conservatives who gave Bush a free pass on fiscal issues, which is to say, no delivery.
So, the protest. I might go out there and support a limited anti-war part of their message, nad tweak 'em on their warmongering President Obama.
Posted by Mike Kole at 11:06 PM No comments: Links to this post

Email ThisBlogThis!Share to TwitterShare to FacebookShare to Pinterest
Labels: anti-war protest, Barack Obama, San Francisco
My Mecca
(San Jose, CA)- After about 30-35 road trips to see the San Jose Sharks play places other than San Jose, I finally went to the HP Pavilion, aka the Shark Tank, to see my favorite team play. It was an excellent experience!
I started the evening with the CalTrain trip from San Francisco. It was great to see Sharks fans board at the stops along the way, wearing their Sharks jerseys.
It was really great not being one of the odd fans wearing the road team's colors, 'accidentally' having beers spilled on me when my team scores. Loads of fun to see fans having jerseys with names from the past, like Gaetz, Wilson, Makarov, Nolan, and Damphousse. 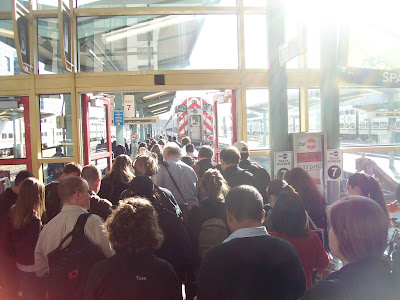 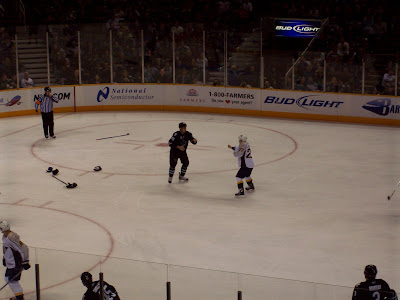 I went to the fights and a hockey game broke out. Staubitz vs. Tootoo, win Staubitz 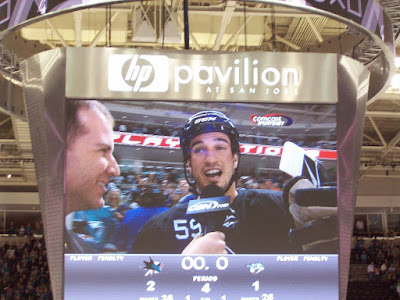 Staubitz is the new local hero. Big cheers during the post-game interview
Posted by Mike Kole at 7:32 PM 1 comment: Links to this post

Email ThisBlogThis!Share to TwitterShare to FacebookShare to Pinterest
Labels: Brad Staubitz, CalTrain, HP Pavilion, Jordin Tootoo, San Jose Sharks
Bay Area Fun
(San Francisco, CA)- I have often raved about the medical profession, for their genius in placing conferences in places people actually like to visit. This stands in stark contrast to the engineering profession. I've gone to conferences in Madison, WI in January, Pittsburgh and New Jersey. No, with Ame's conferences, we've gone to Hilton Head, Los Cabos Mexico and now San Francisco.
The Bay Area has so much to offer. Yesterday, I took Isabel to Ghirardelli Square for ice cream and chocolate, and then Ame jogged up the Embarcadero to meet us at Pier 39 for lunch. 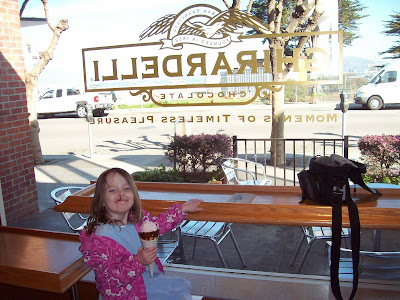 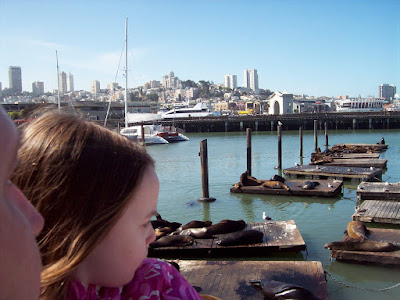 Isabel watches the sea lions struggle for territorial dominance on Pier 39.
Today's adventure involves a trip north across the Golden Gate Bridge to Muir Woods, and perhaps a trip on a ferry!
Posted by Mike Kole at 10:45 AM 2 comments: Links to this post

This week's edition of the Libertarian Party of Indiana's Weekly Podcast features 2008 candidate for governor Andy Horning. We discussed the Indiana Federalism bill vis-a-vis state sovereignty, and why he loves constitutions: rule of law vs. nation of men.

Check it out via this link.

Andy surprised me a bit in not being thoroughly ecstatic with the bill proposed in Indiana. As always, though, Andy has deep thoughts to back up his positions.

Longest podcast to date, and very substantial.
Posted by Mike Kole at 11:31 AM No comments: Links to this post