Sooner or later, I knew this would happen. If you shake hands with 1,000 people on any given day, you run the risk of picking up a cold. The law of averages finally caught up with me, and I now have Candidate Flu. Fortunately, I do not have any events planned for the next two days, so I can rest. The upside is that I have time to fill out more candidate questionnaires.
Posted by Mike Kole at 7:22 AM No comments:

Another day, another garage sale. This time, the Allen County Libertarians staged a sale at Foster Park. Turnout was very heavy with many deadly serious bargain hunters at work. I was able to talk politics with many inbetween finding deals. 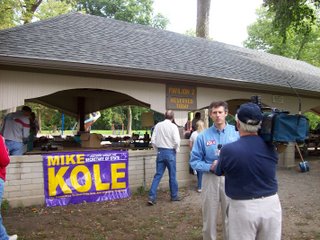 TV-15 WANE sent a camera to cover the event, and aired segments in the afternoon and evening. 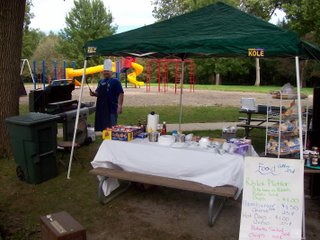 Jack Evans ran an excellent kitchen! I bought some of his homemade blueberry-lime jam!

Many thanks to Doug Horner, Jack & Hilary Evans, Mike & Karena Sylvester, and Mike Stacy for inviting me to this event!

Rex & Susan Bell hosted their fifth annual garage sale this weekend, and it was another large event. The areas on and around SR 38 through Henry and Wayne Counties have huge garage, yard, and barn sales, and the Bells take part, with the whole extended family. 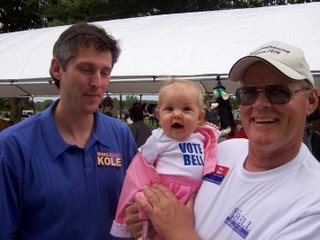 I was relieved of cotton candy making duties this year, and left just to greet bargain hunters and discuss Libertarian politics with those so inclined.

Many were so inclined. Many cited disappointment with the Republicans since Mitch Daniels took office. They repeatly expressed the expectation that taxes would be lower. Many pointed to the big cash windfall from Major Moves and the eagerness to spend it, rather than return it to the taxpayers. I spoke less here than at any event in recent weeks. I didn't have to. I just kept listening and nodding in agreement.

Actually speaking, with folks from Henry County. Thanks to Rex for the picture.

The Wayne County Libertarians have always done well at the ballot box. I expect that will continue this November, with their best returns ever.

Big thanks to Rex & Susan, Ross, Gayle Bond, Cheryl & Marvin Heacox, and everyone else. I appreciate the consistent effort of the Wayne County folks, and appreciate their support of my campaign as well!