Off to the Wilds!

Kole Hard Facts will by seriously underproducing over the next few days as Alex & I join fellow roughriders Steve and Greg in the Adirondacks. 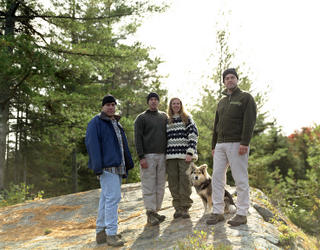 From left: Steve, me, Ame, Shasta, and Greg. We're standing on a rock peninsula that juts into one of the several finger lakes in the Adirondacks. The flat top of the rock is our usual camp site. The lake is called Long Pond, and is in a wonderful, pristine area north of the tiny town of Speculator, NY.

This will be my seventh trip to Long Pond, and Alex's second. Stories and pictures to follow next week.

I was walking along an open ditch north of 146th Street in Noblesville at the new Brenwick development, and I nearly stepped on Bambi.

She was left behind by her mother in the high grass. I just happened to look down before placing the step that would have been on her. She darted out, but only a few feet away, which allowed me to get these pictures. 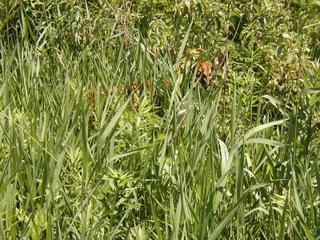 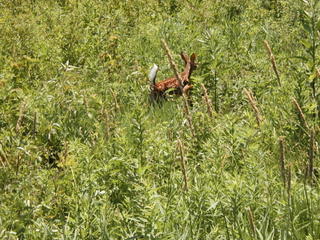 Hello to those jumping over from the Club For Growth's Carnival of Capitalism! The Club For Growth performs a valuable service- backing fiscally conservative candidates for office. That's an increasingly difficult task. While conventional wisdom points pro-growth, anti-tax voters to the Republican Party, the actual policies enacted by elected Republicans makes some folks wonder what point there is to Democrats.

The Club is essentially doing what I am doing in my own way- working to steer candidates away from the intoxicating power of taxation and the spoils of looted tax dollars, and back to the principles this country was founded on: limited government and self-responsibility.

I do it a little differently, though. I have been thoroughly convinced by the Republicans themselves that they have no use for smaller government. I am a philosophical libertarian who is a Libertarian Party member, and Libertarian candidate for office. I'm running for Secretary of State, which is the Libertarian Party of Indiana's ballot access race. See www.mikekole.com for details.

If you have the time, scroll down through some of the posts from the last two months, where I chronicle the wreckage of Republican domination here in Hamilton County, IN.

This county enjoys the reputation of being the most Republican county in the state of Indiana, and yet the all-GOP County Council, and all-GOP city or town councils of Carmel, Noblesville, and Westfield have all passed new taxes within the last six weeks. Read the rhetoric of the elected Republicans. If you didn't know better, you might think you were seeing the words of Ted Kennedy of Nancy Pelosi.

Thanks for your visit! I hope you enjoy what you find here... at least in terms of my writing and the points I make.
Posted by Mike Kole at 6:46 PM No comments:

Proud Papa interrupts this political blog once again with another picture of precious little Isabel. This time, it's her first smile picture. 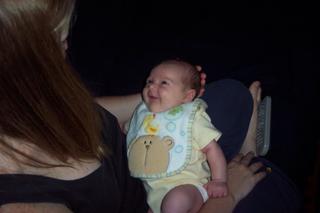 She had been starting to form little half-smiles over the past week, but today we saw the first full-fledge smiles and grins. Isabel has great facial expressions. We just kind of hold her and talk to her, watching her reactions. 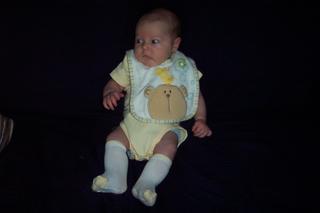 Eric Schansberg recently penned a very sensible article on the delerious effect the "death taxes" have, punishing thrift and investment, and limiting the ability of one who passes on to exercise fully their right to give what's theirs to whomever they choose.

Where Schansberg surprised me is on his charge that these taxes greatly affect the poor.

It has been said that the only sure things in life are death and taxes. It seems that Democrats are fond of combining the two-- especially for the wealthy and the working poor.

I'll be looking forward to making a campaign issue of the death taxes in Indiana. I was astonished to learn that my home county, Hamilton County, has a division of the Assessor's Office that does nothing but oversee the appllication of Indiana's death tax! From the County's website:

The Hamilton County Assessor’s Inheritance Tax Division's main function is to determine the Indiana State Inheritance Tax liability of each heir or beneficiary in a decedent’s estate. The Indiana inheritance tax is not a tax on the property itself, but on the transferee’s (heir’s) right to receive or succeed to property.

The transferee's right to receive the property? Wow. Correct me, but this is the United States of America, right? There's more:

The tax is imposed at progressive rates with exemptions decreasing and the rates rising the more distant the relationship of the decedent to the recipient of the property.

This is stupid law. Stupid policy. Some wonder why there's a brain drain in this state.

Here's an idea- let's make Indiana a wealth magnet by repealing the death taxes. Let's attract people with means rather than send them away.
Posted by Mike Kole at 8:08 AM 3 comments: