The Geist United Opposition held it's dinner fundraiser tonight at the Bella Vita Restaurant, and it was quite a success. The upstairs bar area was packed, and the auction items saw a lot of bids.

In fact, Ame & I won two bids- for wakeboarding lessons (Alex will get those) and for house cleaning service (we'll all enjoy this!). Here are some pictures from the evening. 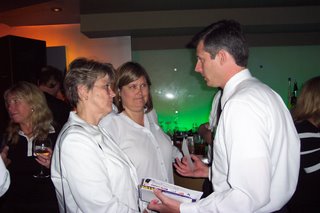 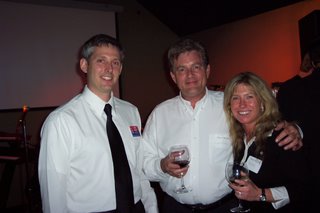 Having fun with Geist residents 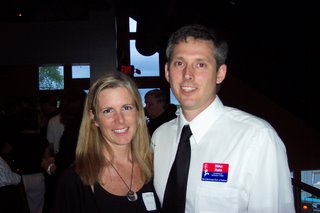 With Ame at the auction tables.

Where is the Libertarian Party Going?

It's astonishing, really, that libertarians have split themselves almost 50-50 between the two major parties. If they both advocate big-spending government, I suppose it doesn't really matter much who libertarians let themselves be marginalized by.

If you believe in libertarian principles but are voting either Republican or Democrat, you are wasting your vote. Look to Mike Pence as the prime example.

Pence took a completely libertarian position on federal spending- it's out of control, it's too much, and it's his party that needs to change things because they control majorities in both the House & Senate, plus they have the Executive branch and the veto power.

So what happened? the GOP leadership took Pence to the woodshed, smacking him down hard. Republicans are addicted to spending.

Mainly- why should elected Republicans change their behavior if the small government people keep giving them their votes? Answer: They have no reason to. They keep getting the votes.

As for the Sager article, I don't deny his assessment of the Libertarian Party overall. Indiana is one distinctly different state, as compared to the national party and most state affiliates. I really wouldn't expect him to single out Indiana as an exception in a generalized, short article.

Indiana is setting the example for the national party and state affiliates by taking an incremental rather than absolutist, utopian position. We have listened to the concerns average voters have about the utopian positions. Heck- listening to the public is something the major parties' officials ought to do more of. We have a well-organized party, we run a good number of qualified candidates, and we are talking about issues that matter to people- not merely our pet issues.

I hope Libertarians across the country read the Sager article and take heed. There is much to learn from criticism, and Sager's is fair.

I also hope small-l libertarians take heed of Morris. There is much to learn in his criticism of small-ls who vote major party.

Thanks to Jeff Pruitt for pointing out the Morris post!

Update: The Cato Institute's John Samples has a blog entry on Pew's research, with analysis:

So the present may seem bleak for libertarians. But just wait. Help is on the way.

Indiana Libertarians have already discovered this trend. One of the most successful outreach areas has been the numerous College Libertarian groups statewide. I have visited the Notre Dame and Indiana Wesleyan groups, and they draw numbers that exceed their Democratic and Republican counterparts.
Posted by Mike Kole at 8:54 AM No comments:

They say everyone loves a parade. This campaign season, we're going to be enjoying a lot of parades!

Join the fun with the Kole Campaign Saturday afternoon at the Harrodsberg Heritage Days, in southern Monroe County. Mapquest link. Line up begins at 1pm, and the parade starts at 2pm.

There is more Libertarian outreach available than just the parade, as there will be an info booth staffed with volunteers, Friday from 6pm-dusk, and Saturday from 10am-dusk.

This is a great opportunity to increase Libertarian visibility, Kole name recognition, and to promote our positions on key issues, such as opposition to new terrain I-69; support for referrendums on DST towards self-determination on the county level; and support for property rights.

I'll look forward to marching with you Saturday!
Posted by Mike Kole at 12:21 PM No comments:

The Kole Campaign Team are always looking for ways to learn the best techniques and strategies for winning the election. Therefore, Campaign Manager Rob Place will be attending Elections & Campaigns magazine's upcoming seminar entitled "The Art of Political Campaigning". The seminar is in Washington DC, and runs June 1-3.

Serious teams subscribe to Elections & Campaigns because their insights are proven and invaluable. Serious teams attend E&C's seminars for the same reasons. Link to the seminar details.

We're serious about this election. We need $1,000 to get Rob there. Won't you help today by contributing?

Please follow this link to donate.
Posted by Mike Kole at 8:24 AM No comments:

Email ThisBlogThis!Share to TwitterShare to FacebookShare to Pinterest
14 Days, And Counting

14 days after the primary election, the Secretary of State's website still does not have all of the numbers from the elections. Link to 2006 primary results page.

Significant counties such as Allen and Hamilton are not even listed. Why the major delays? The press releases out of the Secretary of State's office prior to the primaries indicated that everything was working smoothly. Is this smooth? Link to SOS press releases.

This info should have been fully compiled and available online within 48 hours of the conlcusion of the elections.
Posted by Mike Kole at 8:18 AM No comments:

Email ThisBlogThis!Share to TwitterShare to FacebookShare to Pinterest
Rex Bell's View on Libertarians and the Star

Wayne County Chair Rex Bell's "My View" letter was printed in today's Star. It addresses recent Star columnist comments about Libertarians, but more importantly, shows the value of our presense on the ballot and addressing policy issues. From the letter:

All across Indiana, the Libertarian Party steps up whenever the government feels its interests trump the rights of property owners.

Is there a place in our political system for a party that is uncompromising in its quest for limited government and individual freedom? Is there a place in that system for a party that is unapologetic in its support for the Constitution and the Bill of Rights? I think there has to be. I also think it will be a sad day in our history when there isn't.

Actually, it's a great letters section today. My second-favorite is from Gary E. Spittal of Indianapolis. Here's just one great line from his letter:

Is there a Republican left in Congress who can claim to be a fiscal conservative without provoking raucous laughter?

Sure, there are a few. But they all get taken to the woodshed by Republican leadership when they push too hard.
Posted by Mike Kole at 7:11 AM No comments:

Email ThisBlogThis!Share to TwitterShare to FacebookShare to Pinterest
In The Eye of The Beholder

I was somewhat mystified by this recent Indy Star article, that featured widespread complaints about heavy truck traffic on I-465.

I find that I-465 traffic is actually fairly pleasant, especially when compared with Chicago, or with Cleveland, where I spent many years on the highways. In my work as a Right-of-Way Agent and as a statewide candidate, I am driving I-465 virtually every day, at virtually any time of day. Sure- rush hours can be rough, but at least things generally keep moving.

Besides, the heavy truck traffic is very positive in a symbolic way. The trucks represent thousands of logistics jobs located in Indiana. You can't have those jobs without the trucks. From the Star report:

The new construction would bring the total volume of distribution and industrial space under roof in metropolitan Indianapolis to 217 million square feet -- a 9 percent gain since 2002.

That 9 percent equals the space in 20 buildings the size of Downtown's tallest skyscraper, 48-story Chase Tower, which contains 905,188 square feet.

FedEx officials say their 600,000-square-foot addition will increase traffic flow only a trickle, by about 25 trucks daily.

However, the sheer accumulation of warehouse space across the region has driven up truck traffic.

Empty roads are more convenient to drive, but represent a lack of economic activity, let alone growth. As for me, I'll smile today when behind a semi-trailer.
Posted by Mike Kole at 3:38 AM No comments:

Be sure to go to my campaign website frequently to look for events near you. I'll make appearances in Hamilton and Monroe Counties this week.

The next one is Tuesday evening in Fishers. The Libertarian Party of Hamilton County is hosting a 7:30pm Meet-Up at Claude & Annie's Restaurant, at the intersection of SR 37 & E. 141st Street.

All are invited, whether dyed-in-the-wool Libertarian, curious about Libertarian politics, or interested in a spirited debate. Register here, or just show up.
Posted by Mike Kole at 9:31 AM No comments:

13 days after the primary election, the Secretary of State's website still does not have all of the numbers from the elections. Link to 2006 primary results page.

Will we have to wait this long after the general election, too?
Posted by Mike Kole at 8:36 AM 1 comment:

Friday, May 19 is the next fundraiser for the Geist United Opposition, with a "Black & White" dinner at Geist's own Link to online registration.

The theme is "Black & White"- so named because to the GUO members, the issue is black and white, and forced annexation is wrong. Attendees are encouraged to wear black and white business casual attire.

The purpose of the fundraiser is to prepare for the legal costs of fighting the forced annexation. The cost is estimated at $120,000. Bella Vita is donating the food & drink, so the donations will not be chewed up by the costs. Thanks to Bella Vita!
Posted by Mike Kole at 6:25 PM 2 comments: