I'll be on the trail throughout November, and have four event dates to pass along to you:

Tuesday, 11/8, 8pm: Non-Election Night Party. Celebrate the fact that no Democrats or Republicans were elected in Indiana this year, at Bearno's in downtown Indy. I'll probably speak, but we can certainly enjoy good pizza and talk politics! RSVPs to Allison McGuire by email: maguire_ar@hotmail.com, or by phone: 317-372-6436.

Thursday, 11/10, 9:30pm: Business meeting of the Indiana Wesleyan University Libertarians. I'll speak about my campaign and the role the Libertarian Party has in shaping policy statewide.

Tuesday, 11/15, 7pm: Fair Tax Event at Barley Island, in Noblesville. I'll speak briefly and introduce speakers. Open to all, especially if skeptical or if you have questions. Sponsored by the Libertarian Party of Hamilton County.

It's not too late to host a TV party for Monday Night Football, when the Colts finally defeat the New England Patriots. Invite 10-15 friends, family, and co-workers. Introduce me at halftime and I'll speak on my campaign and libertarian principles for 3-5 minutes. Contact me for more details: mikekole@msn.com
Posted by Mike Kole at 9:38 AM 3 comments:

Free Speech On Blogs Is Toast

This is some bewildering stuff. First, let me say that I have never had any use for the so-called campaign finance 'reform' hogwash out there. I don't care if you are talking about Shays-Meehan or McCain-Feingold, it's all bunk that purports to try to take the effect of big money out of politics. In fact, both laws have the effect of empowering big money, as only the biggest campaigns and political parties can easily the management of the regulations and paperwork created by those bills and still have plenty of money left to get the message out. Most smaller campaigns decide not to raise any money at all, so as to not be troubled by the paperwork nightmare. So, as you see, it is in fact the little guy's voice that get squashed, not big money's.

Today, the House of Representatives considered a bill, HR 1606, that would have exempted blogs like this one from being treated as campaign contributions. In the near future, any blog- left, right, or center; Democrat, Republican, or Libertarian- will be treated not as mere political speech, but as a campaign contribution.

A majority was in favor of passing the exemptions, but the bill was defeated, because infuriatingly, the majority was less than the required 2/3rds needed for passage. From CBS News:

Online political expression should not be exempt from campaign finance law, the House decided Wednesday as lawmakers warned that the Internet has opened up a new loophole for uncontrolled spending on elections.

The House voted 225-182 for a bill that would have excluded blogs, e-mails and other Internet communications from regulation by the Federal Election Commission. That was 47 votes short of the two-thirds majority needed under a procedure that limited debate time and allowed no amendments.

The vote in effect clears the way for the FEC to move ahead with court-mandated rule-making to govern political speech and campaign spending on the Internet.

Fortunately, some in the House still get free speech and the First Amendment. Sadly, not enough.

The bill's sponsor, Rep. Jeb Hensarling, R-Texas, said the federal government should encourage, rather than fetter, a phenomenon that was bringing more Americans into the political process."

The newest battlefield in the fight to protect the First Amendment is the Internet," he said. "The Internet is the new town square, and campaign finance regulations are not appropriate there."

Without his legislation, Hensarling said, "I fear that bloggers one day could be fined for improperly linking to a campaign Web site, or merely forwarding a candidate's press release to an e-mail list."

I do hope and pray for a strong backlash from across the political spectrum in response. Unfortunately, the response to Shays-Meehan and McCain-Feingold was somewhat muted, as the forces on the left especially found that restricting campaign money was a good thing. Now, hopefully, they are seeing more and more how it affects the smallest political voices, and especially their own.

But regardless of political leanings, any blogger is affected, no matter what candidate you may wish to speak freely about. Posting a link on your blog may be a crime. In America!

We already have an "Online Freedom of Speech Act." We call it the First Amendment.
Posted by Mike Kole at 2:31 PM 1 comment:

Email ThisBlogThis!Share to TwitterShare to FacebookShare to Pinterest
Brad Moves On

My friend Brad Klopfenstien is moving to a new challenge. He leaves the Libertarian Party of Indiana as Executive Director to take a similar position with the Indiana Licensed Beverage Association. 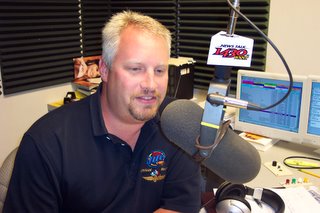 Brad's move has gotten a fair amount of media attention, which is gratifying. He has done great things to elevate the state party from fringe party status to respected third party player. He built great relationships with the media, and also in the Statehouse.

The Libertarian Party of Indiana will enter the crucial election year of 2006 with new leadership, the party said Thursday.

Executive Director Brad Klopfenstein will resign next month to accept a lobbying job and will be replaced by interim director Daniel Drexler.

A rumor spread last week: The executive director of one of Indiana's major political parties had quit. One lawmaker asked: Was it the Democratic Party's Mike Edmondson, or the Republican Party's Luke Messer? Neither. It was the
Libertarians' Brad Klopfenstein.

On Nov. 4, Brad Klopfenstein is stepping down as the executive director of the Libertarian Party of Indiana to take a similar position with the Indiana Licensed Beverage Association. Klopfenstein has served longer (five-plus years) than any previous Indiana state director and during his tenure the party set new highs for both votes and percentages of votes; saw seven Libertarian candidates elected to local offices and eight more appointed to boards and commissions; and in 2002, the Indiana Libertarians hosted the party’s national convention.
...
NUVO: The party hit some new highs under your leadership. What did you do differently?
BK: I think the two things that I did differently were, from day one, I went around and made sure that everyone in the media knew who I was and who the Libertarians were. We made it clear that the party had viable candidates and that we should be a part of their political coverage. Secondly, we changed our message. Previously, too many Libertarian candidates got caught up in the philosophies of the parties, which are important, but we encouraged our candidates to take the next step and use those philosophies to develop solutions to address the problems affecting their local constituencies.

We also did a detailed analysis of who our natural constituents should be. What we found was that small business owners were being ignored by both the Republicans and Democrats and we began actively courting those individuals. We felt that they were a natural fit for our party.

It was my pleasure to serve Brad as his Campaign Manager for his 2003 bid for City-County Council. In truth, there is very little managing I could do for the guy who managed the whole party. It was astonishing to watch him zero in on his home precinct in an overwhelmingly Democrat district. His Democratic opponent won with about 83% of the vote, but Brad took nearly 40% at home. He showed me what could be done with a plan, determination, and a small budget, when coupled with good libertarian ideas.
Posted by Mike Kole at 5:31 AM 3 comments:

A Butterknife, Property Taxes, and a Doctor's Legacy Lost

Rob Beck has really been sharpening his pen knife in his blog "Shall Not Perish". His latest entry is excellent in its scathing challenge to Republicans to honor the memory of Doc Bowen, who capped property taxes when governor. Bowen stands in contrast to Mitch Daniels, who may be known as 'The Blade' in reputation, but to Beck, is merely 'The Butterknife'.

Doc Bowen is a revered figure in the Party. A stately old gentleman who really felt like the kindly family Doctor you visited or your grandfather, Bowen was a great and classy governor. He saw Indiana through its earliest attempts to step out of its long-standing rural image and develop a more diverse economic base. He also seemed to genuinely care about the plight of Hoosiers, seeing that the role of government should be limited, but encouraging.

This sort of thinking spits on his legacy. The Republicans should hang their heads in shame. There's a strong chance that if asked, Bowen would identify ideologically more with Libertarians than our current Republican Party. Daniels, of course, sees room to justify the cut in the citizen's relief.

Fiscal conservatives- had enough yet? Get on board with the Libertarians once you have. After all, as regards trusting Republicans to cut the size of government: fool me once...
Posted by Mike Kole at 5:57 AM 4 comments: