I was in the studios of Insight cable TV this afternoon, taping my promo for the ICN candidate show, "Candidates Up Close". These will run on ICN Channel 13 in Lafayette, West Lafayette, and Attica; and on ICN Channel 3 in Kokomo on the following schedule:

Be sure to tune in. See if any other statewide candidate bothered to turn up and tape their own promo. Here's a shot from my taping: 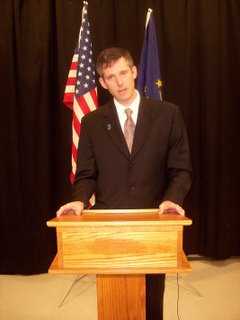 I appreciate the opportunity Insight created- for all candidates to have a 5-minute message for their viewers. Thanks, Insight!
Posted by Mike Kole at 4:37 PM No comments: 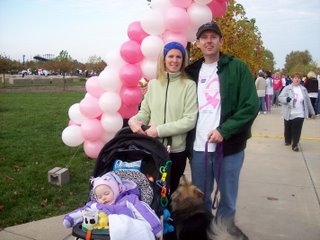 The broken toe was protesting a little, but I would have done this event in a wheelchair if necessary. Too many women close to me have suffered breast cancer, and I do what I can to assist in helping to find a cure.
Posted by Mike Kole at 4:02 PM No comments:

As soon as new money comes in, we put it to work. We raised money at last night's bean dinner, and today we cut an ad to run on Indy's WXNT 1430-am. It will run once an hour during daytime programming- Abdul in the Morning, Neal Boortz, Bill O'Reilly, and Sean Hannity.

For those who can't stand O'Reilly or Hannity, or perhaps question the wisdom of heavy advertising on clearly Republican shows, observe the script:

My name is Mike Kole. I am the Libertarian candidate for Secretary of State.

People often tell me they like a great deal of what the Libertarian Party stands for, but are concerned about wasting their votes.

Let me tell you- there are a lot of wasted votes every November.

If you voted Republican looking for lower taxes and smaller government, you have wasted your vote.

You gave your vote. Did you get your results?

You might have expected them to deliver on smaller government and lower taxes, since they have had majorities in the Indiana House and Senate, plus the governor’s office. And yet, they failed to deliver.

Elect Libertarians. We will deliver.

Why put up with that treatment? Send a message. Vote
Libertarian.

Paid for and authorized by the Committee to Elect Mike Kole, Ken Johnson Treasurer.

If you like this ad and want more of them to run, please contribute by clicking here.

I'm very pleased with this ad. I have wanted to tackle the wasted voted syndrome in my ads for almost two years. This is a satisfying result!
Posted by Mike Kole at 5:12 PM 4 comments:

Thursday night was a glorious night, as supporters of the Kole Campaign gathered for NK Hurst 15-Bean Soup, and fellowship with defenders of property rights.

Many, many thanks to great friend Jim Hurst, who put the event together and provided the excellent food. Also, thanks for his remarks in introducing me. Public speaking isn't everyone's idea of fun, and I appreciate that Jim got up and spoke because of his support for me. I appreciate that very much!

Many, many thanks to Rob Place and Dan Drexler, who managed many of the events' details.

Big thanks to Mark Rutherford for his exuberant fundraising pitch, and to Kyle McDonald for his dignified introductions.

Thanks of course to all who attended and contributed. Your support is the fuel I need for the stretch run!

We raised over $5,000 on this evening, and it will go a long way towards covering the state with radio ads. 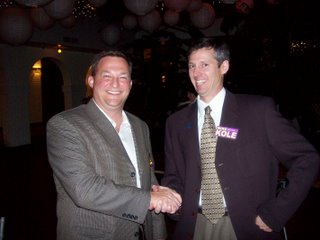 Jim Hurst & Mike. Jim said, "OK. I want one of those toothy grinned politician handshake pictures". How can I turn this man down? 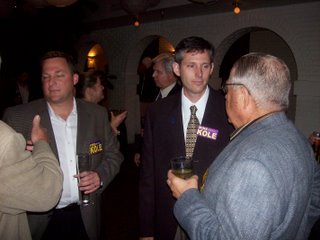 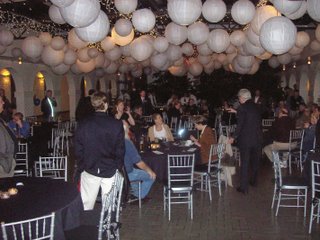 The Marrott's Ballroom was fabulous! 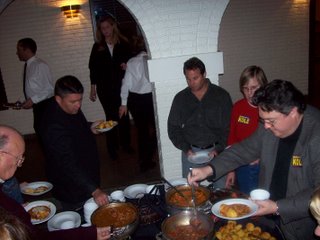 Supporters dig in to the NK Hurst 15-Bean Soup and their Pasta Fagioli. 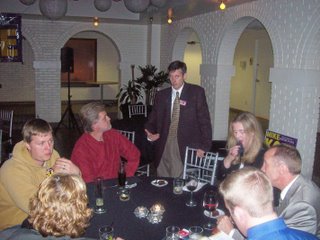 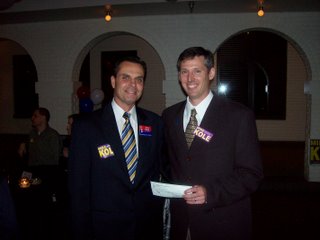 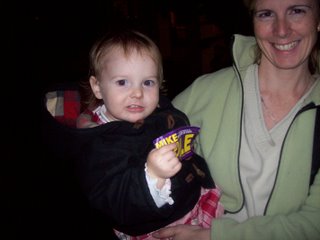 Isabel: "Vote for my Daddy!"

I was proud to speak before a joint session of the legislature defending the right of all Hoosiers to their property, and to just compensation in an eminent domain cases. This included the NK Hurst family, who fought the state's attempt to take their land for extra limo parking at the new stadium site. I was proud to write editorials praising their commitment to the city and criticizing the injustice of taking their land as 'thanks'. I am humbled that the Hursts have given me their support in this way.

Mark your calendars. Email your RSVP. This is a big event you will want to attend.
Posted by Mike Kole at 9:00 PM 1 comment:

Email ThisBlogThis!Share to TwitterShare to FacebookShare to Pinterest
Forum Report

I was pleased to appear at the Greenbriar Elementary School last night at a candidate forum featuring those on the ballot in Washington Township. I appreciated the invitation and the opportunity, as this community is very in-tune with issues.

The organizers framed this as a job interview, with the citizens as the boss. I like these metaphors. They work.

I gave my standard stump speech on my platform items of increasing voter turnout, promoting and end to gerrymandering of districts, and the adaptation of voter verifiable paper audit trail (VVPAT) voting machines. I capped off in the spirit of the Woody Allen Rule, which is, "90% of success is showing up". 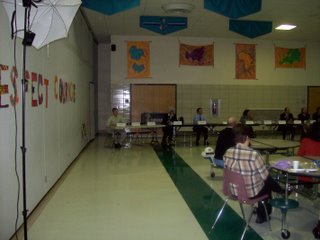 Oh, look! Empty seats surround me yet again. The statewide ballot is loaded with paper candidates.

I pointed out that once again, I was the only statewide candidate, for any statewide office, from any party to show up, and that this happens very routinely. I asked, "would you hire a prospect who failed to turn up for the job interview"? This was well received, and I found myself with pledges of support and votes.

Update: There is an amusing story in the Indy Star about the Republican candidates for statewide office, touring the state in a bus... today. From the Star report:

Three Republicans running for office, including Secretary of State Todd Rokita, set off today on a one-day bus tour to promote their campaigns.

On the bus with Rokita: Tim Berry, the current state treasurer and now candidate for state auditor, and Evansville businessman Richard Mourdock, who is running to replace Berry.

The three left Indianapolis this morning and planned to stop in five cities before returning tonight.

Wow. Five cities. Tra-la-la! I've made over 200 campaign events this year, and have been actively running a real campaign for over two years. These guys get on the bus for one little day. It's such sad commentary that they will get so many votes for bringing so little to the table.

Rokita brags on visiting all 92 counties as SOS. Guess what? That's his job. There's nothing extraordinary in that.

It was a great hour on the "Abdul in the Morning" show today, with Jim Hurst promoting my campaign. It really meant a lot to me that Jim has given me such strong support.

If you missed the show, no problem. Here are links to Sendspace, which is temporarily hosting the four 15-minute clips of the hour. They have all the commercials and promotions, so you know.

Big thanks to WXNT and Abdul Hakim-Shabazz for having us on the program this morning, and to Andrew Lee for permission to post the clips!
Posted by Mike Kole at 9:37 PM No comments:

Some time ago, I taped a 2-minute spot for Comcast cable, to be aired in the Indianapolis system. Here's the schedule:

If you watch it, please make a digital recording of it. I'd like to post the video to You Tube so that everyone can see it. Email the team to arrange sending a file to us! We would be most appreciative!
Posted by Mike Kole at 5:34 AM No comments:

We're running ads on WXNT for the Kole Campaign's bean dinner, featuring NK Hurst Company's 15-bean soup. The ads will run once an hour Wednesday & Thursday from 6am through 3pm.

We can run more ads if the money comes in. Click Here to contribute for more ads.

Click here to listen to the ad!
Posted by Mike Kole at 11:29 AM No comments:

Email ThisBlogThis!Share to TwitterShare to FacebookShare to Pinterest
Not An Endorsement, But...

The Indianapolis Star issued its endorsement for Secretary of State this morning. While they continue to seemingly give the nod to the front-runners, they did have this to say about me:

Libertarian Mike Kole is a thoughtful representative of his party. He should easily win the minimum number of votes needed to ensure a spot on the ballot for Libertarians in future elections.

32 positive words. That's major progress from a paper that was openly hostile to us in April and in years past. I am pleased that the Star's Editorial Board included this comment, and hope it is read far and wide, because they haven't held back on negative comments in their endorsements this year. They trashed the Republican and Democratic candidates for US House in District 7 because they deserved a good trashing.

The Libertarian Party of Indiana has worked hard on its credibility. This is a small result, but one that I believe helps pave the way for endorsements and better treatment in the media overall.
Posted by Mike Kole at 4:52 AM No comments:

Be sure to tune in to WXNT 1430-am on Wednesday morning at 8am. Jim Hurst & I will be guests on the "Abdul in the Morning" show to talk about the Kole Campaign "Beanefit" Bean Supper.

Those outside the Indianapolis area can listen online. Click here!
Posted by Mike Kole at 9:05 PM No comments:

Email ThisBlogThis!Share to TwitterShare to FacebookShare to Pinterest
Support Needed For Radio

We need to get 420 radio ads purchased. They cost around $4,500. These 1-minute ads will be aired on 28 radio stations across Indiana. The same kind of ads were key to doubling the ballot access threshhold tied to the Secretary of State's race in 2002.

Click here to contribute. Even a $10 donation buys an ad.

Remember: Libertarian Party ballot access depends on my outcome. If I come in first or second in any given county (a distinct possibility!) Libertarians get appointments to boards and commissions like Board of Zoning Appeals.

Click here to contribute. Help us spread the Libertarian message and reach our goals!
Posted by Mike Kole at 3:38 PM No comments: