Voting With Your Feet

One fabulous recipe for driving away wealth is to raise income taxes or property taxes. The more money a person earns, the more incentive that person has to leave so as to preserve their rightful earnings. When property taxes outstrip the perceived value of contributing to the upkeep of a neighborhood or a municipality, the higher the tax, the greater the incentive to find a place that will be worth the bill.

I've long said that people vote with their feet. I've done it twice in my life. My great-grandparents crossed an ocean to do it. One place I voted with my feet on is Indianapolis. I did it before the City-County Council, on Mayor Peterson's recommendation, raised the income tax. I did it before the property tax assessment issue came to fore. Thank goodness!

Even NuVo gets it: 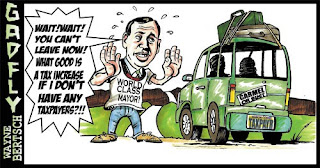 When the deleterious effect of high taxes is apparent even to NuVo, then it's as plain as the nose on your face. Wayne Bertsch at NuVo.

I love the "World Class Mayor" bit on the t-shirt. Peterson likes to crow about making a "World Class City" and that high taxes are the price to be paid. What a load. When the murder rate is higher than Detroit's, Indy is not a World Class City in any sense, except perhaps Third World. The priorities are a wreck. Public safety should be fully funded while everything else plays second fiddle. It isn't the way things are done in Indy, so I left. Now that I'm making more money than when I lived in Indy, I'm damn glad I did, because it would be a crime to pay more for getting less.

The people who remain in Indy have to decide something: Do you want to have Indy as a cauldron of poverty and crime? Or, do you want to have increasing wealth and decreasing crime? It's a simple matter of policy, and while I'm no fan of the Republicans (because they create disincentives for wealth, only are slower on the implementation), the Democrats are quickly destroying Indianapolis. So, while too many partisan Democrats would rather fiddle like Nero and keep their people in office, will the independents be swayed to vote Libertarian? Or at least stop voting Democrat? (I can't even bring myself to say 'vote Republican'. They haven't earned it.)

Hat tip to Hoosiers For Fair Taxation on the strip!

Excellent Time for a Protest

The NFL season opener is in town tomorrow night. The Super Bowl champ Colts host the Saints for a big deal game, with big deal entertainment on Monument Circle. (Kelly Clarkson is ok by me, because she had Mike Watt play bass on recent recordings.) The national TV cameras will be focused on Indianapolis.

What better time to dunk some property tax assessment tea bags into the canal? Details:

INDIANA TEA PARTY
NFL Opening GamePan Am Plaza - Across from RCA Dome.
Thursday, Sept 6th - Meet at 6pm.
Bring your assessment (or facsimille) to put in the giant tea bag.
At 8pm we march to the Downtown Canal to dunk the tea bag once more

I've heard some grumbling about this, along the lines of, 'why can't you just enjoy the moment and not try to give the city a black eye?' Har har, the city already has the black eye. Check out the murder count, murder rate, general crime rate, tax rates, wealth flight, and then see if people trying to right the ship is in fact 'giving the city a black eye'.

Sometimes, embarrassment is the only motivation for fixing obvious and huge problems.

Update: Matt Tully wrote a truly unfortunate column for the Indy Star, urging everyone to enjoy the 'circus' part of the 'bread & circuses' charade, essentially sneering at the tax protesters. From his column:

A little perspective, folks. Something tells me people in Dubuque, Detroit and Durango don't care about tax increases in Indianapolis. And I'm betting NBC will steer its cameras away from those protesting in the streets. But since you're going to be here, Kelly and Faith, I thought you could use a primer on what's going on.

B. The point of shining the light of truth on the tax situation for people outside to see is not because they have an interest. It's because this event is a sham designed to prop up the gilded face of the city. Underneath the glitter is a hell of a lot of decay. The protesters are, as the kids say, keeping it real.

C. Perspective? It doesn't matter what the problems of New Orleans or the third world are. We live in Indiana. All politics being local, we work to make home a better place. If we ignored home and focused elsewhere, home would get worse. Why does Tully want home to decline? What kind of 'thinking' is that? Perspective, indeed!

Maybe it's just that the Star sells a lot of newspapers and draws a lot of website hits by running pictures and stories about the Colts, thus selling a lot of advertising. Maybe that's Tully's motivation for this slime-dripping hack job.
Posted by Mike Kole at 7:40 PM No comments:

Red River Gorge, III
Ame, Isabel & I took our third trip to the Red River Gorge in Kentucky earlier this week. It was an excellent trip! 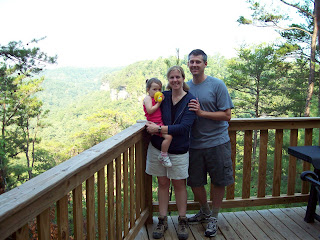 Posing on the deck of the cabin. Awesome views!

For me, the highlight was watching Isabel enjoy participating in the action. She really wanted to do some hiking rather than simply being carried in the backpack. So, we let her walk the trail to Balanced Rock.

We figured this would be a short walk on her part, that we would end up carrying her after some short distance. She only turned two this past June.

She's a tough little girl! She fell down twice and brushed it off, saying, "I ok. Let's go". She scaled all of the stairs by herself, at her insistance. This is no small feat for a 2-year-old, as you can judge by the photos. 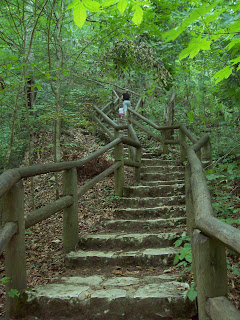 Isabel leads Mommy up the stairs, up the mountain.

This is the joy of being self-employed: Take off on a non-holiday Monday for a couple days. It's ok, the boss approves. 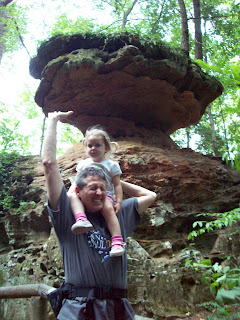 What could be better? Ohio State wins large, Michigan loses to the first cream puff on its' schedule- at home, and Notre Dame gets pounded at home.

Repeat this, oh, four or five more times, and we'll see a memorable season! (It's a shame both teams can't lose when Michigan hosts Notre Dame later this month. Oh well.)
Posted by Mike Kole at 7:21 AM 1 comment: