Many believe that the amounts of money put into political campaigns is 'out of control', so they have championed campaign finance 'reform'. Laws have been written out of this feeling, and it is supposed that the citizenry feels safer because of these laws.

Allow me to begin a series of posts that shows how these laws have affected me in my campaign for Secretary of State. I am a Libertarian candidate for statewide office, and I have raised less than $20,000 thus far. It is a lesson in unintended consequences.

Did you know that I am forbidden from coordinating efforts with fellow Libertarians who happen to be candidates for Federal office?

I am forbidden from sharing information with them, planning activities with them, doing joint advertising with them, and a host of others, unless I create a Federal PAC. I cannot even link to their campaign websites on this blog or on my campaign website. You will note that I only have links to non-Federal candidates.

I have no interest in creating the Federal PAC. It costs money in addition to the time and energy necessary to fill and file the paperwork. I have raised a modest sum of money thus far, and the people who trust in me and support my efforts with their modest dollars expect me to spend that money on promoting my campaign, not on hiring a paperwork jockey, or setting up shell organizations.

Any well-heeled candidate who doesn't mind the diversion of dollars, volunteer staffing, and energy can be free to set up the PAC and coordinate with their Federal candidates.

In other words, the Democratic and Republican incumbents, who generally have war chests, can afford it. Challengers, and especially those from minor parties, generally cannot afford it.

So, to the backers of campaign finance- Do you feel safer knowing that I cannot plan to attend a parade with Steve Osborn? Do you feel that representative government is made better by my inability to coordinate a press release with Scott Wise or Eric Schansberg?

Scott Wise's campaign contacted me and asked me to stand at his side when he announced his candidacy. I had to decline, because I have not set up a Federal PAC, and do not wish to be subject to Federal scrutiny under BCRA. Scott's campaign was unaware that the laws had this effect, so I advised them.

Obviously, I believe these laws are a sham. All these laws do is trip up, hinder, and waste the time and money of modestly funded challengers.

This is why Libertarians refer to the campaign finance 'reform' laws as Incumbent Protection Plans- because that's exactly how they play out.
Posted by Mike Kole at 10:06 PM No comments:

It had been a while since I had been with the LaPorte County Libertarians, so I was delighted to visit Wednesday evening, for dinner and a meeting.

The LaPorte County group is outstanding. They have candidates running at every level, from US Senate candidate Steve Osborn, to Statehouse candidates Greg Kelver and Andy Wolf, to township candidates like Fred Lutterman. Their energy is refreshing and inspiring! 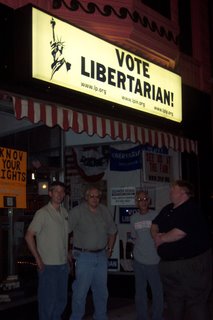 Here I stand with Kelver, Lutterman, and Wolf, from left.

It's a shame we didn't get a picture in daylight. The front office with the lighted sign will be seen in textbooks across the country. A maker of collegiate political science texts is including a picture of the front of the building as a header to a chapter on thrid parties. It will occupy a space formerly sporting a picture of Raplh Nader.
Posted by Mike Kole at 9:44 AM No comments:

Reporter Chris O'Malley has an article in the current Indiana Business Journal on the proposed Nickel Plate corridor light rail system, from Noblesville to Indy, via Fishers. O'Malley requested the interview with me because when he was doing research on the article, he kept finding my name attached to commentary on the plans. Here's one quote, in context with others:

Still, it appears not everyone is sold on the massive expenditures necessary to launch a rail system or dedicated road for buses—the rapid-transit options local planners are contemplating.

“I was surprised at how impassive the reactions were to the numbers,” said Kole, also a Libertarian candidate for secretary of state. “I was astonished. If we buy all this infrastructure, we’re going to be stuck with it for a long time.”

In other cities with new rail systems, at best 35 percent to 40 percent of passengers come from private autos—and many of them had been carpooling. Most are former bus riders whose routes were affected by the rail service, he said.

“Rail transit is a big waste today, but politicians love it as a jobs program that environmentalists support,” said Gordon, who teaches at the university’s School of Policy, Planning and Development and has studied the economics of some of the nation’s rapid transit systems.

Unlike federal highway funding, which is based partly on population and road miles, urban mass-transit projects tend to be funded based on which ones are most expensive, O’Toole said.

“Why do cities like Indianapolis want rail transit? Pork,” he asserted.

Interestingly, elected Hamilton County Republicans are leading the charge for this wasteful pork. They tout the importance of regionalism.

Well, understand then that regionalism means a giveaway to the people of Fishers and Noblesville, to be paid for by the people of Beach Grove, Southport, Greenwood, Avon, Carmel, Speedway, and Indianapolis.

In the end, three things are required for light rail to work:

None of these things apply in Indianapolis, whereas they all apply in New York City, where I was last week, riding the trains. 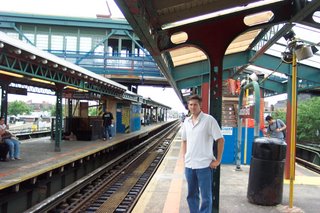 I ride mass transit where it works- in places like NYC. Here I stand in Queens on the platform of the #7 train, for a ride into Manhattan, July 7, 2006.
Light rail, or monorails are bad policy for Central Indiana, through and through. Bus lines can make sense where there is proven ridership. Hyperfix showed there is enough demand from Fishers to Indy to justify three morning buses and three evening buses. Add that- but a billion for rail? Madness.
Posted by Mike Kole at 7:42 PM No comments:

At long last, here are the New York pictures. My son Alex is 14, so I thought it was high time he made another visit to the city, feeling he could better appreciate it now than when he was 8, on his first visit.

My best friend, Steve Wainstead, lives in Queens, and he put us up for the duration of the trip. His neighborhood had amazing ethnic restaurants. There were many Mexican joints, but also Columbian, Ecuadoran, Indian, Thai, Afghan, Tibetan, and Italian- all in a three block span! We ate delicious kabobs at the Afghan restaurant. 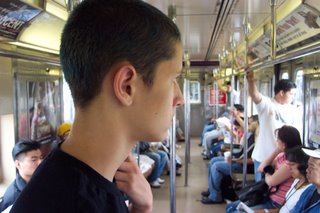 Alex riding the #7 Train that John Rocker made famous. 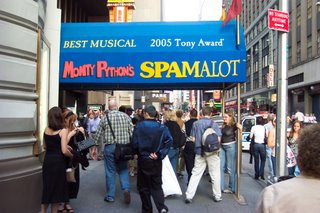 We went to see "Spamalot" on Broadway. The theatre district was jammed with revellers. 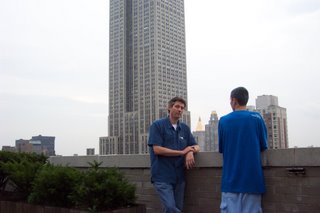 Mike and Alex atop the roof of Tom Menner's apartment building, which is a tall building, but dwarfed by the Empire State Building. 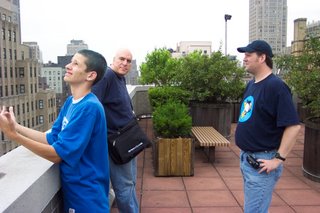 From left: Alex takes in the Empire State Building as Steve Wainstead and Tom look on. 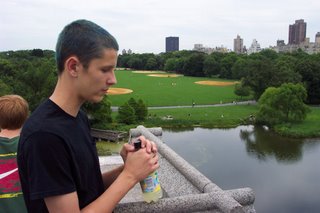 No trip to New York is complete without a visit to Central Park. Alex watches the wildlife in the Turtle Pond.

I got a fundraising letter today from Ted Kennedy. Boy, talk about not knowing your audience. His letter is stumping for the Democratic Senatorial Campaign Committee.

The letter is an full-scale attack on George Bush. I don't like attacks that come without stating what you would do differently. Four pages of attacks on Bush especially, but also Karl Rove, Rick Santorum, and Katherine Harris. Not one word about what the Democrats would do differently if they controlled the Senate.

The envelope included a window sticker that reads, "Had Enough? Vote Democrat in '06". While I wouldn't mind seeing a good many Senate Republicans packing, I have no interest whatsoever in replacing them with Democrats. I want them replaced with Libertarians.
Posted by Mike Kole at 1:06 PM 3 comments:

Email ThisBlogThis!Share to TwitterShare to FacebookShare to Pinterest
On The Road

One of the nice things about working on the road is extra opportunities for political events that weren't on the schedule.

This time, it's LaPorte. I'll visit the regular meeting of the LaPorte County Libertarians at their glorious headquarters building right downtown. I believe the meeting time is 7pm on Wednesday, so come on down and visit with the defenders of Liberty!
Posted by Mike Kole at 12:53 PM No comments:

Email ThisBlogThis!Share to TwitterShare to FacebookShare to Pinterest
Temporary Whiteout

I understand that many were not able to see this blog over the past two days, getting only a blank white page. I checked it myself and found this to be the case. I republished, and it appears to be readable once again.

If you ever find a technical problem with this blog, please let me know about it so I can get it fixed.

I apologize for any inconvenience to you.

Update: Blogger was down for 90 minutes yesterday. For whatever reason, when Blogger came back online, Kole Hard Facts did not, despite most other Blogger pages coming back immediately. Link to Blogger's status report.
Posted by Mike Kole at 10:45 AM No comments:

It's Illegal, So It Stops?

I laughed out loud when I read a letter about fireworks to the editor of the Fort Wayne News-Sentinel:

I hope you are catching the sarcasm here; I am laying it on thick.

Thanks for a fun letter!

These things were all true before the laws changed. It sounded no different in my neighborhood this year from last. It was noisy then. It was noisy last night. Laws that nobody is willing to enforce are a sham and cheapen respect for the law. Good that the restrictions were peeled back.
Posted by Mike Kole at 7:28 AM 4 comments: