What I didn't say in my 4-13-2011 post was that I had invited Mike Watt & The Missingmen and crew to stay at my home after the show, and they had accepted. I've learned not to get all excited about things that can change in a heartbeat, lest I suffer a big letdown, and have it out there for the world to see besides, allowing me to look like a braggart who can't produce the goods. Or some such.

In any case, Watt & Co. were very happy to have a place to stay. It all fits in with Watt's "We Jam Econo" ethic, and beats the sterility and monotony of motels. Here's what he had to say about the stay in his online tour diary for 4-13-2011:

good man mike kole has invited us to his pad in fishers, we passed it coming earlier in the day. he's got two beautiful dogs, just beautiful - so much righteous fur, like husky/saint bernard style, righteous for hugging. he's got a washer to so levis, chonies, gig shirt and socks joins other missingmen stuff - so kind is mike. I hose off and then get into nightwear, the best ever sitch, best ever! he's got a trippy four corner-style couch (four pieces), I put myself in and finding my konk mask (it was in blue ronnie jacket inside pocket), I don and konk just after one - again, repeating last night w/no drinking. a weak watt has to fight a good defense. we're coming into the endgame of this tour now my health is most critical.

I did not get a chance to interview him for my podcast. He was just too busy with tour logistics, and wasn't feeling too healthy besides. He's been fighting off a bug and has a knee injury to boot. Touring the way he does (51 gigs in 52 days) isn't for the faint of heart. Anyhow, I'd love to discuss his vocabulary. I can translate some of the above.

The band were very businesslike. They got in, chose beds/couches/air mattresses, gave me laundry to do, and all got their laptops and were online. The best I could do for them in terms of post-gig hospitality was to get Watt some Throat-Coat herbal tea. Nobody wanted a drop to drink. Very friendly, but very much locked in.

In the morning, Watt was up first and was immediately online. He writes his tour diary entries daily in the morning, does email interviews with journalists, lines up the next crash pads, confirms phone interviews he'll do from the van, etc. Before long it's time to go. Watt calls, "Pull anchor!" and everybody snaps to- grabs their stuff and heads to the van. 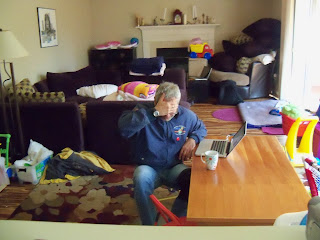 Watt dealing with the online world and tour logistics 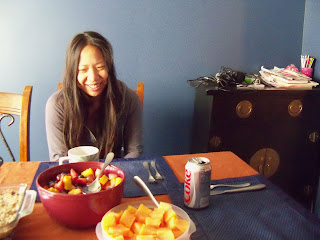 Photographer Peak was the other early riser, here chatting before everyone came around for breakfast. 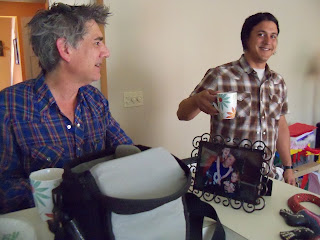 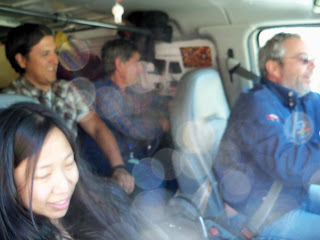 Pull anchor! Everyone's in the van, and beginning the roll to St. Louis, morning sun playing havoc on my snapshot.
It can be a letdown if expectations are too high. This is a working band. Ame asked if they had groupies. Shit- they don't have time for that. It was a 4-hour drive from Fishers to St. Louis, and they gained an hour crossing from Eastern to Central Time Zone, but they have an afternoon in-store appearance at a record store there, so they're in the van (Watt calls it 'The Boat') before 11am.

I wish them good fortunes and safe travels, and they're gone. Someone in St. Louis will share the same experience, and so on as they head back West.
Posted by Mike Kole at 9:08 AM 3 comments:

This is always one of my top sports watching days of the year- the day the NHL playoffs begin.

There's a topper, though. Mike Watt is playing Indy today with one of his many bands, the Missingmen, at Radio Radio. The topper is so good that I'm going to skip out on playing hockey, and going to the sports bar with the guys to watch all the games at once.

I love watching Watt work his bass. He makes crazy faces while playing fantastic, intense music. Here's a clip from a show he did at the Grog Shop in Cleveland Hts OH last year: