The Sky Is Falling For Amtrak

Someone must have sent out a memo instructing Amtrak supporters to be at their most hyperbolic, most shrill worst earlier this week. I've seen several fairly wacky pleas on behalf of maintaining subsidies for the Hoosier State train, which runs daily between Indianapolis and Chicago. 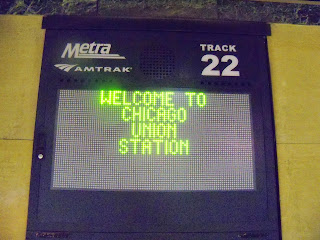 I've ridden the Hoosier State three times in the past year or so. It's a quaint little train that tends to have two passenger coaches, and plenty of empty seats, on the average day. By Amtrak's numbers, less than 4,000 people ride per months, or 133 per day.

Think about that. We're talking about a political struggle over a train that carries 133 people a day. Glad we've nailed down all the big stuff, like the economy, the wars, our gigantic prison population, and urban decay so that at long last we can fine tune the minutia.

Two subsidies, one federal and one local, are poised to ride into the sunset. From John Ketzenberger at the Indy Star:

Now the $4 million federal subsidy is a lot of money. So is the possible $3 million state subsidy. The Hoosier State line hauls about 3,100 people up to Chicago each month, so the federal per-ticket subsidy is about $107.50. A state subsidy would amount to about $80.60 per ride.


The passenger pays between $38 and $47 for a ticket to ride the Hoosier State line. Apparently the train’s real value, though, is to haul broken cars to Beech Grove and return fixed cars to service.


In this case, Beech Grove maintains 550 good jobs and a $49 million annual payroll if the subsidy is paid. From this Indiana collects more than $1.6 million in income tax and at least twice that in income tax even if the $61 million economic impact estimate’s high.


You could argue the state realizes a net gain in the deal.


You could, but that would be a pretty lousy argument. Let's set aside for now the idea that Amtrak's main business is passenger service, and Ketzenberger concedes the strongest case is for the Hoosier State is something outside Amtrak's core business. So, I did a search on CSX's website, for the cost to transport a car from Chicago to Indianapolis. There wasn't a designation for 'Amtrak passenger coach', so I went with a plain gondola car filled with scrap metal, on the basis it would be heavier than an Amtrak coach, so I would be overestimating the cost. The Horizon coaches weigh about 80 tons, while a gon has a capacity of 110 tons, in addition to the car weight.

So- the cost? $2,443.00 per car. Unfortunately, I can't find info on how many broken cars are hauled to Beech Grove. The best I can do here is to take the cost of the subsidies, which is $7 million. That's good for 2,865 cars per year, or 8 a day. Now, maybe I travel on the wrong day, but I've never seen more than one car hauled on the Hoosier State. Maybe for each of the days I rode and failed to see more cars, there was another day each where 16 extra were lashed to the train for repair. I think I'm being generous here. Amtrak only owns 369 locomotives and 1,384 pieces of rolling stock. Am I to believe that every one of them breaks down every year?

Ketzenberger does provide a clue. If the total subsidy to each rider he cites adds up to $188.10, that's how much the fare needs to be raised to bring it to zero. No need for a political struggle, especially one that sounds so shrill.

Especially over 133 riders/day. It's nutty. That many passengers will cross I-65 in five seconds... when it's moving.

I like the Hoosier State, but nobody owes me a ride. Lose the subsidy, hike the fare, and move on.