Bookstore Down!
This is a long overdue post. Sorry.
My work takes me all over Central Indiana. One of my favorite things to do when out and about is to stop at interesting looking mon & pop stores or restaurants. When in Lebanon, in Boone County, I would always stop at Mason's Used Books, on the north side of the town square, across from the Court House. 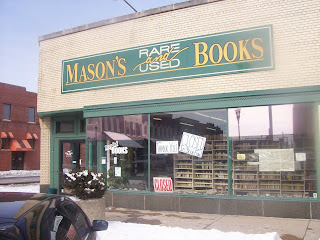 No more. Mason's closed their doors at the beginning of the year.
I'm not sure why they closed. Perhaps the owner retired. Maybe they couldn't make the rent. Whatever, I'm saddened by the loss. I picked up some truly unremarkable used paperbacks there, but also some very interesting books, including a copy of Washington Irving's "Tales From The Alhambra". That was a gift for my son, Alex. We visited the Alhambra together. It was a great old copy that was printed in Spain, and had the orginal price tag attached- in Pasetas!
The owner had a great sense of humor. I enjoyed talking about books with him. Alas. I hope somebody buys his stock and keeps the place open.
Posted by Mike Kole at 1:43 PM 1 comment:

I like to gamble. I play poker, and I like to go to Vegas to play video poker, blackjack, and did I mention poker? I never went to that club, though I have poker buddies who have. They reported that the operation was a bit shady, and that sore losers often looked to recoup their losses in the parking lot. So, I steered clear of that one. Illegal operations have a way of attracting a bad element- one willing to take criminal risks.

When I go to Vegas and play video poker, the payback on most machines average 90-95%. That means that on average, if you put $100 into the machine, you'll get $90-95 back. Some are even higher. Some pay out better than 100%! These are usually high roller machines, or in places trying to draw players. Here's a link to a published chart of Las Vegas slots payouts.

See, Vegas wants you to know that you can play for a good while on your money. The see to it that their numbers are published and distributed to the travel and gambling magazines. The Hoosier Lottery never advertises their payout on their radio and TV ads- for good reason.

The Hoosier Lottery's payout is 60%. Link to their distribution webpage for 2006. That's pretty rotten compared to Vegas, but then Vegas is the place where gaming operators face the most intense competition in the world. They have to payout. The Hoosier Lottery? Well, their competition often gets shut down in a raid.

Actually, I'm a bit surprised that the payout is as high as 60%. I suppose it is because Indiana has the riverboat casinos at the state lines- Blue Chip in Michigan City; Argosy and Caesar's on the Ohio River, among others. There is some competition, but no comparable competition in Marion County. OK, there's an off-track pari-mutuel house for horse racing, but poker? Hence, poker rooms and peashakes spring up.

Say! Why hasn't some Marion County Democrat stepped forward to announce that a poker room really doesn't harm anyone? Hmm.
Posted by Mike Kole at 7:09 AM No comments:

Email ThisBlogThis!Share to TwitterShare to FacebookShare to Pinterest
Fully Addicted

Just as smokers are addicted to nicotine, governments are addicted to the revenues generated by the sale of tobacco products. So, I look for governments to continue their duplicitous approach to tobacco- deepen the regulations, write more laws, but for God's sake keep it legal so that the money continues to stream in to fund programs that expand government.

The Indy Star fuels this fire with an editorial calling for expanded federal regulation on the newer tobacco products, such as the smokeless-spitless tobacco that is not subject to the regulations as they are currently defined.

Hmm. With that, it is surprising that marijuana hasn't been legalized and regulated. With its' status as the top cash crop in the USA, the revenue stream from its taxation could be gigantic. Report by Drug Science.org. News report by the LA Times.

Hmm. Maybe Gregor was completely onto something about questioning the incremental approach. Sure, regulated and legal makes the product available. But it also makes available the expansion of government programs via the tax revenues.

Man, I'm torn. Thank goodness these are products I don't use!
Posted by Mike Kole at 6:57 AM No comments:

So, You Want Government To Run Health Care?

Feast your eyes. Look well upon it. Doesn't stack up too well against the last private hospital you were in, does it? So, is this what you want? There's a beautiful quote in a CNN report:

"A soldier who fights the battle shouldn't have to come home and fight the battle of bureaucracy," (Acting Army Secretary Pete Geren) said.

It's a government hospital. Government is nothing if not bureaucracy. Where's the surprise? It's unjust to the soldier, but entirely predictable.

Now, I believe that the military needs to have medical facilities, and it ought to hold them to the highest standard, but what you see is what you get. To me, it's 100% predictable. So, in the wake of the evidence, shouldn't there be some sort of outcry in favor of privatizing Walter Reed? Shouldn't this occur to at least the Republicans, and more generally, to anyone who can make a comparative analysis? And yet, crickets. The lack of such a reaction shows the deep commitment to government by Republicans and Democrats, regardless of whether the enterprise succeeds, or as in the case of Walter Reed, is a complete and miserable failure.
Posted by Mike Kole at 8:03 AM 4 comments:

I'd like to broaden the discussion Gregor brought to mind in the comments on the previous post regarding my support to Indiana Midwives and their attempt to become licensed in order to legalize their practices.

It may seem plenty paradoxical to see me call for licensure after campaigning for two years to cut back on all manner of government intrusion into business affairs. I agree. It took me a little while to get on board with lobbying on their behalf. It does indeed represent an expansion of government, should they get what they want.

So here I am, a person who believes laissez faire capitalism the best system for the pursuit of happiness, lobbying the state legislature for the passage of a bill that involves a licensure. It does leave me shaking my head in wonder at times.

But it occurred to me that it is a similar approach that other strident libertarians take on a host of generally controversial issues. Here are two:

Many who support the absolute decriminalization of drugs are in favor of the incremental approach of regulating the sale of marijuana in the manner that the sale of alcohol is regulated. The belief is that the best opportunity to get towards an unregulated legal market is via getting the product legalized under regulation, which most American accept gladly for alcohol. Plus, regulated legalization would have the effect of reducing the myriad expenses associated with the drug war.

Many who support absolute property rights where very happy to support laws in many states that mitigated the state's ability to take private property and give it away to another private property developer in the name of economic development. This certainly didn't ban the practice outright in many of the states, as in Indiana, but at least made it a more difficult proposition for the state, and goes some route towards improving the safeguards on private property.

I do take the incrementalist approach. I believe that the average American is positively frightened by absolute freedom because it means absolute responsibility, and when strident libertarians enunciate the position, it drives too many to the other side. It's not that I do not see value in enunciating the ultimate ideals. I certainly enjoy them myself. The thing is, we already got me. We need to get more of the others.

I know this- on the campaign trail, I had more people single out the absolutist Libertarian position on the legalization of drugs as the Number One reason they would not vote for me, even though the office I was running for had nothing to do with drug policy; even though they would as quickly say, "I agree with 98% of what you guys are about". I would ask if they agreed with 99% of what the other parties were about. They would say no, but undaunted, they would vote for a party they didn't believe in even 50% of the time rather than have a laissez faire market for marijuana. So, the incrementalists make a point.

I also take stock in the US Congressional Democrats, who really saw their agenda advanced tremendously during a time when Republicans had majorities in both the US House and Senate, and had the White House. The Democrats didn't take their gains by making extreme calls for outright socialism (even though I believe that is the ultimate goal of many Democrats). They did it by stepping one step to the left of any proposal to grow government made by Republicans. It was skillful negotiation.

I'll never forget President Bush announcing his enormous Medicare prescription drug giveaway. It was the biggest social program ever proposed, and there was Ted Kennedy (in particular) leading the charge in calling the proposal cheap, and a scam on the poor. Of course, it was nothing of the kind, but just one step to the left, the law passed and expanded the original proposal before it was done.

Now, I grant you, we don't have the same luxury the Democrats had. I mean, the Republicans weren't talking about cutting anything in government, so we couldn't very well take any of their proposals and stand just one step to the right, saying that, say, the lowering of a tax rate was too slight and a scam on the people. The Republicans were just busy growing government at every turn.

The point is, there is a model of success to work from. Democrats aren't quoting Karl Marx, but darned if they aren't moving us closer to him all the time.

Maybe if we enunciate free market positions on popular issues moderately, we will see things start to pull our way.

Incremental is slow, to be sure. Being absolutist has left the Libertarian Party a fringe party in the wilderness. Yes, you can point to the Cato Institute, which has been fairly absolute in their approach to capitalism, in gaining their adherents, but remember that Cato hasn't been elected to anything either.
Posted by Mike Kole at 10:14 AM 1 comment: