There have been a lot of press articles that have covered my campaign, but none is as satisfying as one recently penned by Tim Swarens of the Indianapolis Star Editorial Board. Article link. Quotes:

One interesting development to emerge from the interviews is the growing maturity of the Indiana Libertarian Party. With a few exceptions (Kenn Gividen and Dan Drexler come to mind), Libertarian candidates in the past have often provided the comic relief to the otherwise serious business of helping choose our elected leaders.

This year, however, the Libertarians have come prepared with more realistic ideas for how to address state and national issues. Eric Schansberg, an IU-Southeast economics professor running in the 9th congressional district, and Mike Kole, a candidate for Indiana Secretary of State, have been particularly impressive. Neither has a realistic chance to win his race come November, but they are thoughtfully contributing to the public discourse and helping lay a stronger foundation for future Libertarian candidates.

The fun factor provided by candidates who want to eliminate all drug laws and set up prostitution zones throughout Indianapolis may be gone, but the more sober-minded Libertarians of 2006 are helping their party emerge as a credible alternative.

This is very satisfying. It has always been disappointing to me to see Libertarians viewed and portrayed as shallow, single-minded thinkers. Libertarians have strong, valid positions on the entire spectrum of public policy issues, but because old-school Ls focused on such a small subset of these issues, the media came to know Libertarians as clowns. Sadly, many Ls in other parts of the country happily cling to this foolish, self-indulgent attitude. Happily, the Libertarian Party of Indiana had long ago rejected this approach. It is what made the LPIN a group I could invest my name and reputation in.

It may be too soon to declare, "mission accomplished!" since the goal is to be elected. However, as Mr. Swarens points out, the corner has been rounded, and if widespread Libertarian election to office fails to happen this cycle, it may well happen in 2007 and 2008.
Posted by Mike Kole at 7:01 AM 2 comments:

When I'm not out on the trail, I'm still very active behind the scenes. Sometimes I'm making fundraising calls. Lately, I've been filling out questionnaires from PACs and media outlets, especially newspapers. Here's one that's already posted, on the website if the Lousiville Courier-Journal.

Unfortunately, most of the questionnaires tend not very relevant to the office of Secretary of State. The C-J's is a nice exception. I've been asked about Major Moves, DST, abortion, assisted suicide, and a host of things that no Secretary of State can affect. It's bothersome to get one from a special interest group that decides every vote based on one issue, regardless of whether that issue is anything an officeholder can affect. These PACs end up endorsing those who gave the right answer on their litmus test, even though they could be fully unqualified for the office they seek. This is not the path to good government.

I do fill out and return all questionnaires from media outlets. I hope newspaper and blog readers will take the time to read my positions. I believe the average Hoosier will agree with me on these things.
Posted by Mike Kole at 3:11 PM 1 comment:

Another busy day Tuesday with events that stretched throughout the entire day.

First stop, the Indianapolis studios of WXNT, 1430-am. Abdul Hakim-Shabazz had me on to talk about my campaign, which is unusual. He often has me on as the opposition voice, as he did on the discussion on light rail. This time the purpose was to talk about the issues I am campaigning on, such as Voter Verifiable Paper Audit Trail (VVPAT) voting machines, and an end to the gerrymandering of districts. Only had to suffer through a couple of calls asking about Federal issues that have nothing to do with the statewide office I'm running for. Abdul invited me back for another chat prior to the election. 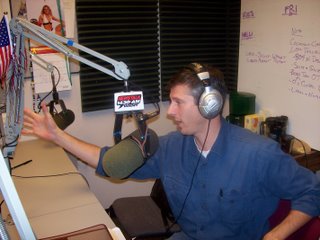 Making a point on the "Abdul in the Morning" show.

After getting some business work done, I headed north towards South Bend, stopping at Rochester for an interview with Todd Hamm of the Rochester Sentinel. Again, I was talking about VVPAT, gerrymandering, and also the way any SOS candidate's results affect their party status. The article should run either today or tomorrow.

While the candidate forum was at IU South Bend, there was a distinct Notre Dame flavor to the event. This started with an interview with the South Bend Scholastic magazine.

The interviewer, Derek Snyder, asked a lot of questions that related to the Libertarian Party''s place at the policy table, and what students can do to be involved- especially if they are not Indiana residents, and thus inelligible to vote here.

There are many things students at Indiana colleges and universities can do, even if they cannot vote. They can staff the polling places, handing out palm cards and wearinig candidate t-shirts or lapel stickers. They can go door-to-door in support of local candidates. They can write letters to the newspapers on campus or in the nearby cities. They can organize their campus organizations. They can host Libertarian candidates to speak to their organization and to wider campus audiences. In sum, there are many things college students can do! An article will run with their next issue.

The big event was the Secretary of State's candidate forum at IU South Bend. There is a great deal that I could say about it, but I will keep it to highlights for now:

The event included four candidates, even write-in Bill Stant. I really enjoyed this aspect of the event, as these forums and debates too often exclude candidates who are on the ballot. Exclusion rips off the voters. 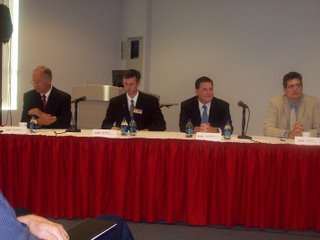 It was interesting to hear Todd Rokita (R) and Joe Pearson (D) both talk about things that could lead to meaningful reform. Their positions sounded very much like my positions. Rokita surprised me when he picked up the gerrymandering issue. This is one Libertarians have been running on for years, but he took it and ran with it in detail- down to the formation of non-partisan boards to redraw the districts. Pearson backed VVPAT. Rokita has shown that the SOS can be a cheerleader for changes the legislature has to make. For all his fervor at this event, I don't recall him pushing Jerry Torr's bill to end gerrymandering during his tenure. It looks like my positions are being co-opted, and that's a sign of success.

It was surprising that the entire discussion focused on the Elections Division, to the exclusion of the Securities Division and the Business Services. I thought Rokita might go there, expecting that at least two of the other candidates have expressed more thoughts on Elections.

Due to having four candidates each with two minutes to respond to a question, we only got to eight questions. I felt that I left several excellent points up my sleeve, lying in wait. LPIN state chair Mark Rutherford advised me that it merely meant that I was well prepared.

All in all, this was a very good event. I wish there were more such forums and to wide audiences. It wasn't a debate, so claiming victory isn't applicable, but I was very, very satisfied with my performance and believe I made my mark this evening.

Mon 9/25: Prep for radio and forum appearances. Fundraising calls in the evening.

Tue 9/26, 7-7:30am: Guest on "Abdul in the Morning" show on 1430-am WXNT to talk about the campaign and my issues. Those outside Central Indiana can listen online at www.wxnt.com

Tue 9/26, 6-8pm: Secretary of State candidates forum on the campus of IU South Bend. The incumbent and all challengers will be present. The moderators include Mike Collins, Jack Colwell, Beth Graham, Jim Wensits.

The event is free and open to the public. Supporters from northern Indiana are invited to this exciting event! Go to the Student Activities Center, Room 223, IU South Bend. Mapquest link.

This forum is sponsored by the Political Debate Club and Student Government Association of IU South Bend, the League of Women Voters of the South Bend Area, St. Joe Valley Project, Political Science Club, and American Democracy Project of Indiana University South Bend.
Posted by Mike Kole at 8:41 AM No comments: