My friends at the Marion County Libertarian Party have compiled an interesting set of data, showing the change in the tax burden from 1997 to 2005.


Observe this chart, which shows the local tax burden as a percentage of income. This is not state or federal, mind you. Just local: 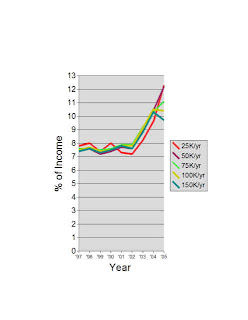 So, considering that I felt that Indianapolis-Marion County government was underperforming miserably, is it any wonder I left Indy in 2004? Should anyone be surprised when people of means leave across borders to other counties? For 12% of my income, I want results!


Keep in mind: Immigrants have historically crossed national borders to enter the United States in order to give themselves a better deal. If you curse me, you curse them.
Posted by Mike Kole at 7:47 AM 3 comments:

Speaking of lazy blogging, I've been slow to add new links to sites I like, even though I visit some daily. Shame on me!

OK, not so lazy. I've been working my tail off. But here are some excellent items I've read lately. You should read them, too.

UnCivil Defence's take on the TSA screening bus riders for dirty bombs, anthrax, and other WMD's, I guess:

I am reminded more and more of my years in South Africa during the Apartheid era. I never thought I'd see the day come when I could make that sad comparison while living in the States.

Rex Bell's letter to the Richmond Pal-Item, on property taxes, and why they are what they are:

There's a good chance that we won't see any reduction in our taxes as long as a majority of voters keep demanding that government should oversee and manage every aspect of our lives from the cradle to the grave.

If you don't think it has come to that, just try to name three things that our government doesn't tax or regulate.

That's a worthy challenge. It is left as an exercise for the student.


Doug Masson's blog entry breaks down in six steps the twisted property tax mess caused in the Statehouse, via an article by Purdue economist Larry DeBoer. It's an excellent demonstration of how fixes can be worse than the problems in their effects. I liken it to driving a car on ice- the harder you jerk the wheel to straighten it out, the more you lose control.

Having attended several of these protests, I can attest to the broad, cross-section of voters they attract, including Democrats, Republicans, Libertarians and independents. I frankly don't understand from a communications standpoint why Wagner would want to attack these citizen protestors. Is that good politics?

No, it isn't, and it isn't pro-democracy either. I can see disagreeing with the point the protesters wanted to make. But when the Communications Director of a political party sneers at people for participating in the political process by protesting- largely the domain of Democrats and leftists- she should at least get a mirror, and at best apologize. If there's one thing we need of Hoosiers, it's to shed their apathy and to participate. Wagner was way off-base in her commentary.