Corporate Taxes In America - Too Low?

I frequently hear my friends on the left complaining that corporations are not taxed fairly, which means, not highly enough. The reasoning is that business can afford higher taxes, while individuals struggle.

Let's put that second thought on the shelf for a moment, and look at whether or not corporate taxes in the USA are high or low.

But those are just federal taxes. Let's not forget that our states add their own corporate taxes. After the state corporate taxes are added, corporations in 24 states by higher taxes than anywhere else in the world. Indiana is among these 24. Only 3 states add zero corporate tax: Nevada, South Dakota, and Wyoming. Wonder no longer why so many corporations are registered in those states. Here's a link to the rankings.

My wife has been urging me to incorporate my business. I have been hesitant. Can you blame me?

Can business afford the taxes? No, but then, they really don't pay them. Individuals do, in the marked-up price that covers these (and so many other) taxes.

What is more important? Our ability to compete in the global marketplace? Or, to fund more government? From the Tax Foundation:

I'd say the corporate tax rate is ridiculously too high. The left may enjoy targeting big, bad corporations as some kind of evil, but funnelling tax money to government is something they actually do with aplomb- to the detriment of us all.
Posted by Mike Kole at 1:15 PM No comments:

If the only three choices the average American is going to consider are McCain, Clinton, and Obama, then I'm positively uninspired, and darned near frightened. All three will do greater damage to our country, in my opinion, and there is no 'lesser of the evils' here.

Thanks to Gregg Puls for forwarding this image this morning. Pretty well sums it up. 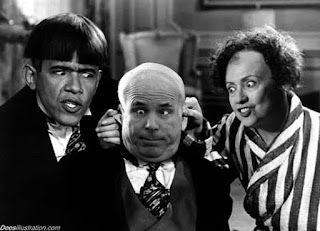 Wanted - An Adult For President

I was reading some of the Washington Post opinion stuff today, and happened upon a Eugene Robinson column that started like this:

Would someone please tell Barack Obama, Hillary Clinton and John McCain that here in the real world, we have what looks like a real problem. It would be nice if they'd pay attention and maybe, you know, come up with some ideas for getting out of this mess.

Problem is, when you have candidates who talk about fluff, and when you have voters who demand freebies, you get people like McCain, Clinton, and Obama at the fore. The LAST thing you're going to get from them is serious talk about finances. That's kook stuff, the kind of thing that gets the 'tinfoil hat insults' going.

Maybe Robinson is part of the problem. He, like so many others who have already given coronation to John McCain, treats Ron Paul like he doesn't exist. So, don't be surprised when Ron Paul type solutions aren't part of the discourse. And yet, Robinson continues:

A good start would be to acknowledge that putting the economy back on a sound footing is likely to be the new president's first task -- and then to begin laying out some ideas for how that might be done. A little honesty would be preferable, too -- an admission that no president will be able to turn around the economy overnight.

I realize that's heresy. Presidential candidates like to tell us about all the largesse they're going to provide. They like to invite voters to envision the sunshine of happy days, not the gloom of an economic slump. But real leadership involves dealing with the economy as it is, rather than as we would like it to be.

If you really wanted it, you could have written an article that read, "Ron Paul may be a longshot, but he's got exactly the right plan for returning the American financial system to sound money," or, "Ron Paul might not promise you the moon, sky, and socialized medicine, but he would get the country back on economic track".

But no. Exclude a good candidate with great ideas because you find their candidacies 'unwinnable', and you exclude the ideas. Thanks for nothing. I'm already reminded of the South Park episode, that lampooned the election choices of George Bush and John Kerry, ridiculing as the choice between a 'giant douch and a turd sandwich'.

OK- If I can't have Ron Paul, I'm ready for the Libertarian Party candidate now.
Posted by Mike Kole at 4:03 PM 1 comment: