Florida Fun
(Marco Island, FL)- I've always wanted to ride on jet skis. It's always looked like loads of fun.
It is! I highly recommend taking the opportunity when it presents itself. In my case, the hotel we are staying at in Marco Island rents the "Waverunner", which is an excellent ride. I got it up around 38mph in the channels between the mangrove stands. 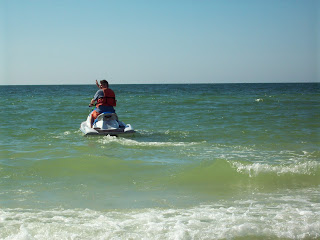 Departing the beach, heading into the deep salty seas, arrgh matey.
That wasn't the highlight, though. In this particular area of Florida, the dolphins are numerous, and the actually enjoy playing with boaters. So, I kept my eyes open for dolphins, and sure enough, spotted the fins bobbing above the waterline, about 2,000 feet out from shore. I raced over to the spot (as I recalled it- with the wave action, even when you thing you're cutting a straight line, you generally aren't). It wasn't long before I spotted the creatures again, so I moved over to them. Several revealed themselves, about 10-15 feet away. I was just idling there, enjoying their presence, and lack of fear.
Then just as suddenly, they were gone. In retrospect, I think they wanted me to go zipping off, so they could play a game of chase. That's what the guys at the rental shop said the dolphins like to do. Anyhow, it was great fun, and well worth the expense.
Posted by Mike Kole at 6:34 PM 1 comment:

Email ThisBlogThis!Share to TwitterShare to FacebookShare to Pinterest
Time Woes

(Marco Island, FL) I've been wanting to comment on the time zone issues facing Indiana for a while, but it seemed like petty nonsense most of the time. It still is, but here's the two cents anyhow.

There are some who clamor for a statewide switch to Central Time. To them I say, please just move one state west. Not only do I strongly prefer Eastern Time, I'd be even happier if Eastern Time occurred one hour earlier than it currently does.

I've been working in the Chicago suburbs for the better part of the last month. Now that DST has ended, dusk begins around 4:30pm, and sunset happens at 5:15! It seems like endless night time, especially to someone who is doing outdoor work on projects that pay by the job rather than the hour, and would dearly love to continue field work beyond a mere 10-hour span. How great Summer EDST was, working outdoors until 9pm! Now I'm vacationing in Florida, far to the east of the eastern time zone, and the sunsets come around 6pm. It's crazy early! I'm not ready to get off the beach yet!

I can understand those in NW Indiana wanting to be linked with Chicago time, what with the obvious business links and the convenience of knowing what time your favorite TV shows will air on the Chicago stations. Apart from that? Darkness before evening? Hermits may not care, but those of us working outside would like to finish the day with natural lighting, thank you very much.

I was always chucking at the opponents of DST who argued against it on the basis that mornings were dark, leaving kids waiting for buses in the scary darkness. Well, where are the complaints about kids arriving home from school in the dark?

It's really no contest from this standpoint. In fact, Central Time is downright foolish in these terms. But at the end of the day, most arguments are purely subjective- just as my main argument is. I'm not a morning person, and I like daylight late into the day. Morning people seem to complain the most about the recent institution of DST in Indiana. But if you are going to be objective and make a business oriented argument, look no further than the lists of the cities within the zones. Let NW Indiana associate with Chicago, but the rest of the state really belongs on EST.
Posted by Mike Kole at 8:58 AM 2 comments:

(Marco Island, FL) The first two times we took Isabel into ocean waters, she was positively unhappy with the experience. Now that she's a little bit older and bigger, the waves aren't so scary. Finding starfish makes it downright exciting! 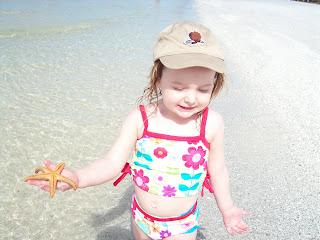 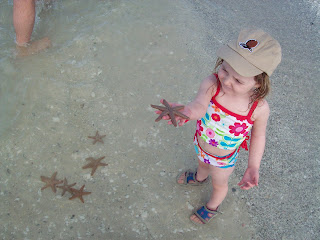 We even found a starfish with six arms.
Posted by Mike Kole at 7:22 PM No comments: