This has been heavy on my mind for some time. Here are the basics:

Steve Osborn, recently defeated Libertarian candidate for US Senate, asked for a recount of 10 precincts. Steve did not issue a statement.

The lack of a statement has allowed people to interpret the request any way they choose. That's unfortunate, because there are plenty of media people like Jim Shella who like to beat on Libertarians whenever they can. Observe Shella's blog post on the recount. (Shella needs permalinks!)

Steve Osborn's request for a recount in the Senate race he lost by a million votes is not just silly, it goes against Libertarian philosophy. The Libertarians always preach less government. Now we are spending taxpayer dollars to recount a race where there is no chance, none at all, that the outcome will change.

If the Libertarians were in charge, would we even have a recount commission?

The comment about spending taxpayer dollars is, by the way, the same reaction many Libertarians had upon first hearing of the recount request. I myself was irate at it because without a statement I could only take it on its' face. Moreover, as the Libertarian candidate for Secretary of State who ran on VVPAT and election issues, I rather felt like Joe Pearson, when he was stepped on by Pat Bauer during the campaign. Steve could have had me on board, along with the rest of the Libertarian Party. Alas. Here is Steve Osborn's non-statement about why he filed it:

Though I am declining comment into specifics at this time about all the reasons for the recount request, I have fully complied with the requirements of Indiana law, and expect the Indiana Recount Commission to grant my petition (which they did; see below), and to perform the requested recounts (tentatively scheduled for December 11th).

This is senseless. It gives dolts like Shella the opportunity to malign us with their interpretations. Steve, you took whatever good message you had and threw it in the toilet.

There are many good reasons to ask for a small recount such as this, such as quality control. Any manufacturer pulls a small percentage of the product off the assembly line to inspect it. The elections are important enough to warrant the same behavior. Inspect a small number to verify the results. With the new electronic machines, and in the absence of voter verified paper audit trails (VVPAT), this is absolutely essential.

But Steve wouldn't say so. Thank goodness the Libertarian Party of LaPorte County has issued a statement:

The Libertarian Party of LaPorte County (LPLP) issued a statement that it fully supports Senate Candidate Steve Osborn's recount audit requested for 10 precincts in Northern Indiana. LPLP Chair Doug Barnes said, "Electronic voting is in its infancy, and we need to ensure the integrity of this new type of voting. Voting machines need to have a Voter Verified Paper Audit Trail (VVPAT), coupled with random post-election audits in a limited number of precincts. Senator Lugar is going to retain his position. An audit is not going to change that. We are not suggesting any impropriety, and we would be shocked if there were any, but it has been increasingly documented in the past two years that the potential for technical problems with electronic voting machines, and even abuse, exists more than it did previously."

If that's why it was done, I'd help lead the cheers. However, Steve Osborn is the petitioner and he refuses to say that these are his reasons. So, while I back the LPLP's explanation, I can't back Osborn's action. The LPLP statement is as much an interpretation as Shella's blog entry. I want it from the man himself.

To answer Shella's question- Yes, absolutely Libertarians would have a recount commission! Libertarians may not believe in funding a lot of government, but voting is one proper and necessary area for it. Nothing is more essential to a government formed by votes than the integrity of the process leading to faith in the legitimacy of that process.
Posted by Mike Kole at 10:53 AM 1 comment:

My apologies for the lack of posts. I'm still tyiping with 1.5 hands. The pins have been removed from my right hand and the progress of healing is good, but with a half cast on the hand, I still am very slow on the typing. Look for increased activity soon, as there has been no shortage of things to discuss!
Posted by Mike Kole at 12:06 PM No comments:

It was fun to get back to Cleveland for the extended weekend to visit family and to see many friends I haven't seen in a long time.

I skipped the 20th high school reunion and instead went to The Spitfire for a sort of WCSB reunion. I missed the actual event surrounding the college radio station's 35th anniversary during the campaign, so it was great to see friends who have made the kind of innovative and unique radio Indy simply lacks.

The Spitfire is a punk rock themed bar owned by my former 'Rock n Roll Radio' co-host Shelly and her husband Stosh. It has the best punk juke box I've ever encountered, and loaded with Cleveland underground rock legends like the Electric Eels, the Dead Boys, the Pagans, and the Pink Holes. 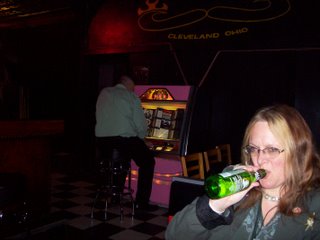 Steve studies the jukebox while Sade enjoys a beer. 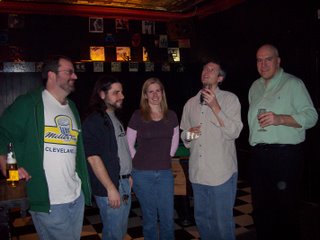 From left: Tim Schmitz, Keith Newman, Ame, me, Steve Wainstead. This was our reprise of another photo with us each posed more or less as we are here, at Shelly & Stosh's wedding, where Ame & I met.

Tim did a great late-night show called 'Bad Art' which revolved around the music of Frank Zappa. He used a flat, wry deadpan delivery that I loved. Keith currently does a late night talk show called 'Crap', which underpromises and overdelivers a dialogue that bounces to wherever the callers want to take it. My favorite Keith Newman show was 'Lo-Fi'. Absolutely the best garage/rockabilly/punk rock show I'd ever heard. He also did really hilarious radio theatre with Michael Jordan. Wainstead & I got together with Keith for a one-night take on Monty Python's 'Election Night Special', which did air live on an election night. Sade did really wild rock shows that travelled over a variety of undrground rock styles. She also did a fascinating weekly half-hour called "Spirit of the Earth", which covered pagan news and views.

Steve did a number of shows, and each seemed to be better than the last, which was no small feat. His show "Punkin' Around" featured an hour of Cleveland bands that greatly aided a strong music scene in the late 80's. "Cyclotron" caught on to the noise rock and grunge scene before anyone heard of Nirvana or Helmet. "31337" featured the electronic underground- hacking, black box devices, and this new thing called The Internet. I remember him carting an old TV up to the stations to show that you could hear cell phone conversations. I joined him for a night of "trashing"- picking up trash bags and rumaging through on the air to show how easy identity theft was.

Of course Steve's big show was "Wainstead All Night". It started with 3 hours and then grew to 5 hours, borne out of frustration as a 3rd shift worker bored to death of repetitive late night radio. Steve reached bored security guards, factory workers, postal workers, bakers, gas station clerks, drunks, and other night howls looking for something different. Steve gave it to them: crazy novelty songs ("Beer is Better Than Girls" stands out), thrift store records like junior high school marching bands and lounge act covers of "Light My Fire", bogus traffic reports, police blotters from the Sun News (Lakewood's were awesome), Brainwash (the 40-second song that repeated 20 or so times with 6 seconds of silence between, filled with callers issuing juvenile insults on each other or bizarre film sound bites), and an hour of Frank Zappa. The show was beloved, and had three different runs on air. Steve says he plans to convert the old tapes to mp3s and make them available as podcasts. I can't wait! 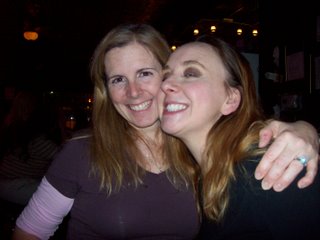 Ame and Shelly met at Earlham College near Richmond, IN. They roomed together in a house heated by a wood-burning stove!

I was hunting around the FM dial today for anything 10% as interesting as WCSB's old fare, and failed. The playlists are only 30 songs deep. Hell- we had 30 song playlists for single artists! We played anything off the entire album... or the entire album.

Great times. Great friends. A strange parallel universe for me.