Abdul Hakim-Shabazz recently blogged that there may be retribution directed at those vocal Marion County opponents of property taxes when the reassessments are released. Ed Angleton reports that he is seeing such retribution:

I attended all the rallies, filed an appeal, and spoke unkindly about the ability of the Center Township Assessor's Office to assess their way out of a paper bag. Our neighbors did none of these.

So, did the petty little tyrants choose to drop the hammer on my wife and I for speaking up?

You bet they did.

Petty little tyrants, indeed. This is government at its worst- when decision-making is arbitrary and capricious, when it is directed by revenge.

It is when I learn of stories like these that I think back to days gone by, when the oppressed tarred and feathered unjust officials, or sent them out of town on a rail, and think that such action was wholly justified. The apparent lack of ethics on the part of the Center Township Assessor's Office is staggering, and should be met with some punishment. We'll start here in the Court of Public Opinion, but somewhere, some higher authority should be slamming a hammer down on the Assessor's Office.
Posted by Mike Kole at 9:01 AM 2 comments:

Email ThisBlogThis!Share to TwitterShare to FacebookShare to Pinterest
Labels: Abdul Hakim-Shabazz, Center Township Assessor, Ed Angleton, Indianapolis, Marion County, property taxes, reassessment
East St. Louis
Funny enough, when I was working in St. Clair County Illinois last week, I was sitting in the motel room drawing site sketches with the TV on for background noise. What should come on but Death Wish, 3. I thought, "was this filmed on location in East St. Louis?"
Here are two sites I had to photograph. The first series is of an actual job site. AT&T is building infrastructure that would provide high speed internet and video services. AT&T often takes criticism that it 'serves the rich folk first'. Hogwash. This area is bombed out. It reminds me of photos of WW2 Dresden. There are virtually no buildings left standing here. But AT&T is serving the poor folk. First. Pointlessly. Well, it's politically correct. 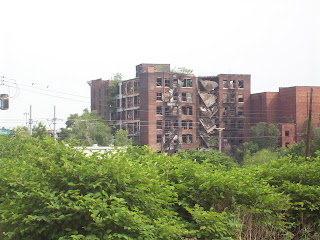 Standing at the AT&T manhole, looking at potential customers? This is one of three buildings in a 1000' radius. The rest are mere rubble and overgrowth. 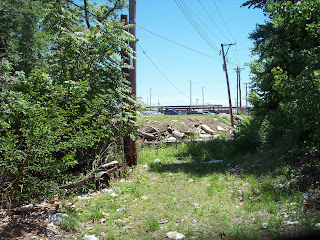 This is a roadway. No kidding.
Next site is a church that I happened upon while looking for another site. Location is 9th & Summit. Unbelievable. When churches are left in this kind of state, you have a feel for how other property is regarded. 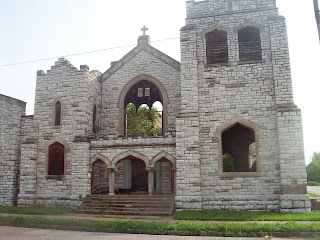 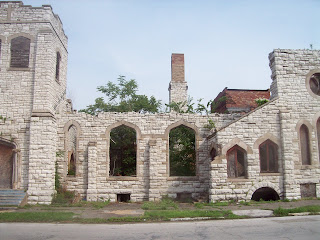 Barr Has Proven His Libertarian Chops
I hope at some point the left-libertarians become comfortable with Bob Barr such that he can stop going out of his way to show his “Libertarian Chops” like this and get to hammering on the biggest issues of the day more exclusively: Iraq/foreign policy; the dollar/taxes/spending/borrowing; energy policy.
There is a great opportunity for Barr to reach the American people very broadly, and it is important that he not self-marginalize by reaching so strenuously within the Libertarian Party. The nomination is won, and the time for this kind of campaigning is over. It ended in Denver, a few weeks ago.
So, as Bill Clinton got "It's the Economy, Stupid" down pat, let's see Barr get these down:
1. Iraq/foreign policy
2. The dollar/taxes/spending/borrowing
3. Energy policy
Barr's positions on the three most important issues of the day are winners. There's no point in him bogging down with correctness on issues of lesser weight.
Posted by Mike Kole at 7:03 AM No comments:

Sad news to the Koles, frequent visitors to the Indy Zoo, from the Indy Star:

A Kodiak bear has died at the Indianapolis Zoo, the second bear to die this year and the third since November.

Ahkiok, a 21-year-old male, was found dead in his den at the zoo about 7 a.m. Tuesday, said Judith L. Gagen, the zoo’s director of communications. “It’s very sad for us. He was one of the favorites at the zoo,” she said.

It's a bit of a shock, because he looked fine, lolling around in a pool of water to keep cool on a hot, humid Monday. Also, Ahkiok's brother died earlier this year, and we saw him just a day or two before he was put down.
Posted by Mike Kole at 7:36 AM No comments:

Let's hope supporters of liberty can now get beyond this "late to the dance" hang up. Anyone who comes around to liberty, no matter where they came from, is ok with me.

Email ThisBlogThis!Share to TwitterShare to FacebookShare to Pinterest
Labels: Bloomberg, Bob Barr, John McCain
What The Hell Are We Doing?

OK, it's time to stir the puddin' a bit here, because the property tax furor is about to reignite. That salve that the Indiana Legislature tossed out hushed some voices for a while, but the uproar was about the cost, the burden of the tax, and that has not been addressed. From Abdul Hakim-Shabazz:

Marion County lawmakers got a briefing tonight on the property reconciliation bills that are going out this week and when it’s all said and done homeowners will wish their property was under 10 feet of water.

According to one lawmaker, “this is not going to be pretty.”

The briefing was conducted by Marion County Treasurer Mike Rodman. Residents will see very little, if any relief in most cases.

The lawmaker, who asked not to be identified said, “the people who were the most vocal last summer will be the ones who see the least amount of relief.”

That latter's real cute, isn't it? Well, many of these lawmakers may at long last find themselves unelected. Ask Indy Mayor Bart Peterson for some insights on it. Now, to the issue...

There were many reports in the Indy Star, USA Today, and other places, about the IPS graduation rates, being around 45%. This means that at least in Marion County/Indianapolis, taxpayers are dedicating huge amounts of money to the schools, which a majority of the recipients are REJECTING.

Maybe this is the right time to begin questioning the wisdom of education being publicly funded. If the recipients are rejecting it, and the people are crushed by the burden of paying for what is being rejected, then what in the hell are we doing? Are we just stupid?
Posted by Mike Kole at 8:52 AM 3 comments:

Here's a Mayor I can love. From the Huntington WV Hearld-Dispatch:

Mayor David Felinton says he will veto any pay raise that City Council intends to give him next week because it would send the wrong message to residents and other city employees.

Proponents of raising the mayor's $62,272 salary, however, say an increase is needed if Huntington wants to attract qualified candidates to run for the position in 2012.

Well, who knows better what the job is worth than the guy doing the job? Thumbs up, David Felinton!
Posted by Mike Kole at 10:48 AM No comments:

(Fishers, IN)- Read this quote, and see if you can guess who it comes from, courtesy the Washington Post:

"Candidly, I don't think the taxpayers should be subsidizing something that doesn't need to be. There are parts of government that can be run like a business and should be run like businesses."

Who is this channelling Milton Friedman? I would be stumped, too. I can't think of any Senator, Republican or Democrat, who would be saying such things these days, true though they are. This quote comes courtesy of a California Democrat- Dianne Feinstein, to be exact. The reason for this unexpected position? It's close to home. The Senate's restaurants are losing loads of taxpayer money:

Year after year, decade upon decade, the U.S. Senate's network of restaurants has lost staggering amounts of money -- more than $18 million since 1993, according to one report, and an estimated $2 million this year alone, according to another.

The financial condition of the world's most exclusive dining hall and its affiliated Capitol Hill restaurants, cafeterias and coffee shops has become so dire that, without a $250,000 subsidy from taxpayers, the Senate won't make payroll next month.

In my opinion, the federal government shouldn't be operating any restaurants on the Hill. You want lunch? There are plenty of restaurants in DC, and many of those will give you the separation from the riff-raff, er, American people, that you crave.

It will be interesting to see if this sudden seeing-the-light will translate into the rest of the country. What a positive development that would be.
Posted by Mike Kole at 9:43 AM No comments: