American Band With Visa Problems.. For Touring The USA?

Ok, it's an American band with two British members. Still.

I'll be very interested in streaming WRUW's online signal Monday 8/19 at 9:30am. The 'Defend Cleveland' show will host David Thomas, fka 'Crocus Behemoth', wherein the singer/leader of the legendary innovative Cleveland rock group Pere Ubu will discuss his difficulties in getting his current tour off the ground. From Pere Ubu's website:


"Fans have bought tickets, flights, hotels, and made plans," Pere Ubu's David Thomas said. "We will not let them down."

The American Federation of Musicians (AFM) is the latest and only remaining obstacle. If the band hands over a "consultation fee" of, at least, $300, the union will send a letter to the US Customs & Immigration Service (USCIS) objecting or not objecting to the visa petition.

Two British citizens have been in the group for the last four years. To tour in America with those British citizens, Pere Ubu must prove that the band itself, or the individual musicians, are of 'world class' caliber and have a respected international reputation. Pere Ubu provided the USCIS with voluminous documentation spanning its thirty-eight year history that attested to the group's considerable reputation and nearly universal critical acclaim. The application states that the band must also seek a consultation from an appropriate labor organization.

"It's preposterous," Thomas said. "The USCIS note on their website that a negative or even positive response from a union does not affect their decision. Why, then, are we required to 'pay off' the union?"

"I do not recognize the musician union's authority in this matter," said Thomas


For anyone who scoffs at the notion that government involvement in the arts would have the effect of government selecting 'acceptable art', look no further. Pere Ubu is recognized generally as a pioneer in experimental rock music, and their album 'The Modern Dance' widely praised. But despite the obvious credentials, what should it matter if a band should have any credentials at all? What about bands just starting out, hitting the USA for the first time? Or, what about musicians with challenging sounds, far outside the mainstream? Why does a union have any say about who plays for paying audiences here, let alone the Customs & Immigration Service?

Mr. Thomas went on to say, "I do not question the Government's duty to guard the country's borders. I just wonder what the AFM, or any other business, has to do with it. I would like to point out that there is only one other country on the planet - a small one - that has any such requirements for musical groups. Pere Ubu used to tour behind the 'Iron Curtain.' We came and went freely - not even the East Germans were in any way concerned with the musical nature of our visits. We did once run into a Swiss border guard who told us, 'We don't want your foreign kind of music in our country - we have our own music.' But he had to let us in anyway."

A proposed Congressional bill, recently passed in the Senate, speeds up the visa process for artists, but it hands over more power to arts organizations and the AFM, both already inserted into the US Government's chain of visa approval, to judge the worthiness of artistic and musical expression. The AFM lobbied for the bill's passage.

The Pere Ubu visa petition was submitted in late May. One of the two British musicians involved has previously been granted a visa as a member of Pere Ubu without an AFM consultation.

"Knowing Ubu fans, there will be a spontaneous movement to raise the $300," Thomas concluded. "Do not do it. Our booking agent volunteered the money. We refused it."


I don't blame him. This is bullshit. It's embarrassing that Pere Ubu could more easily tour East Germany than the USA- particularly when half of the band are Cleveland natives, like me.

Pere Ubu is scheduled to play in Bloomington IN at The Bishop, to conclude their tour on Sunday, September 22. I have been planning to go since the date was announced. Let's hope this is yet one more thing the Feds don't louse up.

Here's Pere Ubu playing their most accessible song, "Waiting For Mary". The late Jim Jones is one guitar, and you may recognize some of the backing singers.

I got a real charge out of seeing this post on the Gibson Spain website, where my friend Doug Gillard is listed as an exemplar of that guitar. He's listed before such nobodies as Robbie Krieger, Jimmy Page, and Keith Richards. Got your translation book handy? 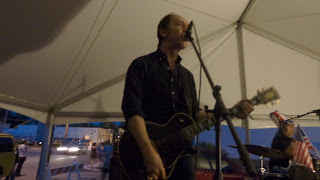 Rock on, Doug! The above photo was taken last month in Columbus OH, where he joined his old band Death Of Samantha to play a festival. The three below are from the Cleveland's Screaming #3 fest from July 2010, where Doug played two sets- with Children's Crusade and Starvation Army. 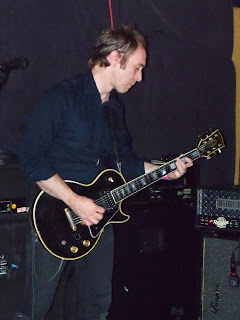 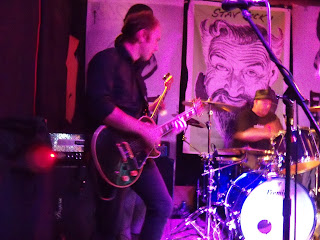 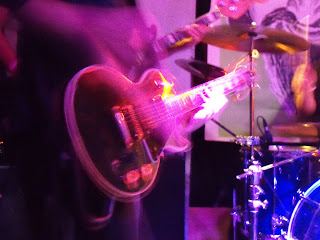