Off To St. Louis

Kinda strange going back to St. Louis today, just over a week after having vacationed there with the family. But today I go back alone. Today is Game 2 of the NHL playoff series between the San Jose Sharks and the St. Louis Blues.

It's tough being a Sharks fan some 1,500 miles away from San Jose, but Indy is somewhat favorably situated between five NHL cities- Chicago, Detroit, Columbus, Nashville, and St. Louis. The longest drive is to Nashville, at just over 5 hours.

I'm hoping my luck holds out. The past two seasons, I went to playoff games in Detroit, and in both cases the Sharks won the games, both in OT, both by a 4-3 score. You can't expect to have your team win a majority of the games on the road, especially in the playoffs. I saw a playoff loss in Nashville 4 years ago. This will be my first playoff game in St Louis.

It will be interesting to see how the crowd is. Nashville was definitely more hostile than Detroit. Red Wings fans have drawn the comparison to fans of the Atlanta Braves, and I agree. The fans are used to their team making the playoffs, and they don't get caught up in crazed, irrational hatred if your team takes out theirs. In fact, they were somewhat playful with me. 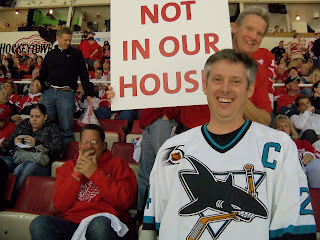 The Red Wings fan behind me held his sign too near to my head such that I finally said, "Okay pal, let me see your sign". He showed me and the whole section burst out laughing. I had to get a picture.