I hope! If Libertarian "took votes from" Republicans, let it be a lesson to the GOP that it isn't enough to give lip service to smaller government, but that especially when they have majorities, they must deliver on it.

In actuality, though, everything I am hearing and seeing points to Libertarians "taking votes from" Democrats. While Dems were soft on anti-war rhetoric, Libertarians such as Eric Schansberg was plain about it. As the Democratic base had many voters who shared this perspective with Schansberg, and stood contrary to Dem Baron Hill and Republican Mike Sodrel, the L's actually reduced Hill's win from blowout to narrow victory. 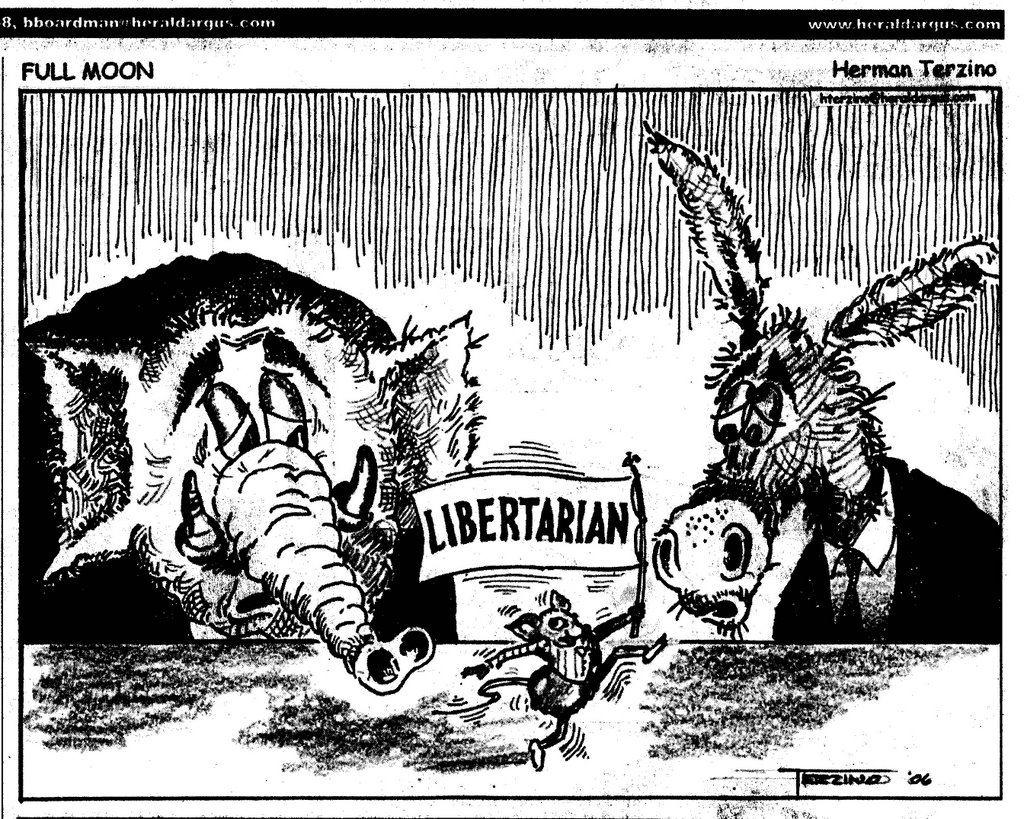 From the LaPorte Herald Argus, the view of cartoonist Herman Torzino.

Here's the lesson for both major parties: Libertarians aren't afraid to take strong positions. Don't blame us if your gray dive to the middle alienates some part of your bases. You simply don't get to take them for granted anymore.

Give us your cold, tired, disaffected masses... We aren't going away.

Check out this email message that landed in my in-box today:

Just a quick note to thank you for throwing the control of election day Inspectors over to the Democrats. Due to your candidacy the Marion County election process will become an even bigger disaster. I hope you are happy.

I had to think about this for a moment, but then it dawned on me that this year, Todd Rokita failed to finish first in Marion County. From the Marion County webpage:

While I'd like to take credit for the spoiler role, a look at the 2002 returns for comparison's sake is worthwhile. From the SOS webpage:

But, look on the bright side. The Marion County Dems, and Ed Treacy in particular, were brutal to outgoing Republican Clerk Doris Ann Sadler. Well! The shoe's on the other foot now. A pity for Clerk-elect Beth White, but likely big fun for Republican howlers.

I'd be happier if I came in first, because Libertarians would be in charge of the elections, which were a mess this year under a Republican. Sadler had five candidates on the ballot who weren't certified, and some polling places didn't open on time. That's nothing to brag on.
Posted by Mike Kole at 9:51 PM 4 comments:

Email ThisBlogThis!Share to TwitterShare to FacebookShare to Pinterest
On WXNT Friday Morning

I'll be on WXNT 1430-am in Indy Friday for the 8-9am hour, along with new LPIN Executive Director Kyle McDonald, to analyze the election from a Libertarian perspective.

Be sure to tune in! Those outside central Indiana can listen online at www.wxnt.com.
Posted by Mike Kole at 9:12 PM No comments:

While I can't report a victory today, I am pleased to report that we have met our baseline objective of continued automatic ballot access for the Libertarian Party of Indiana through 2010. If a Hoosier wants to run as a Libertarian candidate, they need only fill out the forms and hit the trail, no petitions necessary.

Here are some other observations:

It was odd to watch the returns come in, where my numbers were at 5% and about 56,000 votes with around 60% of precincts reporting, and then my returns shifted down to 3% on 46,000 with 80% of precincts reporting, and it appears I'm ending up with around 52,000 votes. Can someone explain this? I still topped the 2% minimum for ballot access, but the next metric was to gain over the 4.1% we earned in 2002. The idea that we might be backsliding would be very disappointing to me personally. I would take responsibility for that.

The Fort Wayne Journal Gazette reported that I took 5%, so I'm not alone in this observation:

In the race for secretary of state, Rokita had garnered 416,229 votes, or 52 percent of the vote. 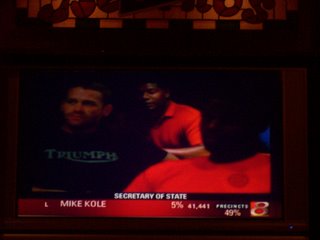 WISH-TV 8 in Indy showed Kole at 5% half-way through. I wish we took more screen shots.

I'd like to hear an explanation on this. How do you account for getting 41,000 votes with the first half of precincts, and then 12,000 with the other half? It's possible but extremely unlikely.

There are so many people to thank, but I'll keep it brief for now: My family, but especially Ame for enduring the two-year disruption. I'm looking forward to enjoying a more normal family life with her, Alex, and Isabel.

Thanks also to Jim Hurst. Beyond the material support, I really appreciate his willingness to step forward publicly to get behind me. That takes great courage in this time of extremely meddlesome government.

Some libertarians were disappointed that my campaign did not feature more red meat for them. As it turned out, I was quite vindicated by the course of yesterday's elections. I called for election machines we could trust, and then we had machines not work in Delaware County and Hoosiers across the state reporting irregularities, such as machines refusing to count Democratic straight-ticket votes. I called for voter verified paper audit trails, and Hoosiers leaving the polls were doing the same.

I called for competence, and then we had major incompetence from the Elections Division and the Marion County Clerk. The Election Division refused to certify 11 Libertarian candidates because of a new filing requirement created by the Legislature and targeting LPIN candidates. And yet, five of those eleven still appeared on Marion County ballots. Maybe the Clerk can be forgiven if the filings looked correct, because they were.

More observations will come once the votes are all counted, which means we might have a week's worth of notes trickling in.

It was with great pleasure that I cast my votes at 6:03 this morning. I voted for a really solid candidate for Secretary of State, wink, wink.

Quite a change from 2004, when the lines were out the door. No line today. The rain isn't helping people sprint to the polls.
Posted by Mike Kole at 6:10 AM 5 comments:

Email ThisBlogThis!Share to TwitterShare to FacebookShare to Pinterest
Schedule

Tomorrow's the big day, but we've had some big days this weekend running strong to end. This is a photojournal report. 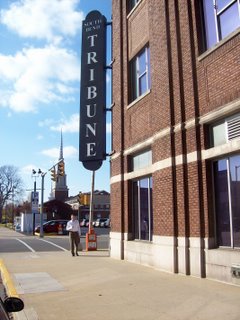 Friday began with a quick visit to South Bend and the offices of the Tribune yielded a nice interview with James Wensits. Article link. 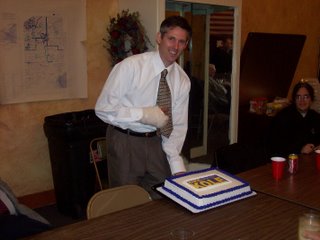 We rallied with the faithful in LaPorte. Huge thanks to Karen Wolf for this excellent cake! It was a tremendous surprise when she brought it out! 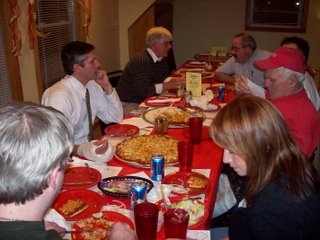 Another rally, this time in Lowell at The Pizza House. We got the faithful excited and then talked small business with the owner.

Saturday was spent in the southern part of the state. Rob Place & I ate lunch in Franklin at the D&D Club in support of their battle against a smoking ban. 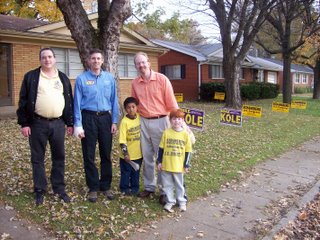 With LPIN District 9 rep Greg Hertszch and District 9 US House candidate Eric Schansberg with two of his sons, in Clarksville. We campaigned at the annual Lewis & Clark festival near Greg's home.
Posted by Mike Kole at 8:26 PM No comments:

Email ThisBlogThis!Share to TwitterShare to FacebookShare to Pinterest
The Final Poll

Tuesday is the day when the speculation ends and we learn how the people of our state have chosen.

Do Hoosiers value having multiple choices on the ballot?

Do Hoosiers want election machines equipped with voter verifiable paper audit trails? Do they want to see an end to the practice of gerrymandering?

Do you like the idea of seeing Libertarians appointed to boards and commissions?

Vote for me, Mike Kole, your Libertarian candidate for Secretary of State to send a powerful message in favor of limited goverment, in favor of ballot choices.

Let the state know that you support VVPAT and and end to gerrymandering.

Let Rs & Ds know you are dissatisfied with their performance, and that they have lost your support.

Mike's first- or second-place finish in any municipality or county, irrespective of statewide outcome, means Libertarians are appointed to boards and commissions, instead of Rs or Ds.

The only wasted votes are the ones cast by supporters of limited goverment in favor of Rs or Ds, because the old parties have commitment to this principle.

Vote for me, Mike Kole, your Libertarian candidate for Secretary of State.
Posted by Mike Kole at 7:50 AM 1 comment: