But, Mike- Mass Transit isn't supposed to make a profit. Egad. Is it supposed to be a money pit, then? Check this out, from a Richmond Pal-Item article:

"The trolley is a luxury," said Shailla Gupta. "People who use Job Connection have no alternative."

Bus Manager Larry King said the service, which is funded by tax money, cost about $30 to $40 a ride to operate with only about 10,000 riders a year.

"It is very inefficient to operate," King said. He said the bus system could save about $185,000 yearly by eliminating Job Connection.

Are you kidding me? This is very clearly a transfer of wealth from the region to a very, very few, and an obscenity. Real life examples like this are why I deeply oppose mass transit. It's an oxymoron in this case. There is nothing "mass" about it.

Now, I've obviously only used the numbers provided. I'd love to see a fuller report on the numbers for this line. What's telling to me is that the bus manager is calling this service "inefficient". That tells you it is over-the-top inefficient. I had IndyGo president Gil Holmes by my side in a recent interview and he didn't flinch when I read his balance sheet numbers with 80% + of operating revenue coming from taxes. In this case, I'm guessing it's about 95%.

"Thanks" to Rex Bell for forwarding this article to me. I think he wants my blood pressure through the roof.
Posted by Mike Kole at 10:17 PM 1 comment:

Well, if this isn't like a refreshing drink of cool water on a humid August afternoon, I don't know what is. From WTHR's initial report:

A key House committee has failed to advance a proposed constitutional amendment to ban gay marriage Tuesday - a move some lawmakers said would kill the proposal for this year.

The House Rules Committee voted 5-5 on a resolution supporting the amendment. Since there was no majority, the measure failed to pass.

I thought for sure this would pass the Committee and then test the resolve of the House Democrats as a whole. It's nice to be wrong!

I'm delighted with the result. It tears me up to think of a class of people being told that they are unwelcome in our state. That's what SJR-7 would have done. One's sexual orientation hurts nobody. It doesn't pick your pocket. It doesn't wound your body. It doesn't change what you hold dear. Good riddance, SJR-7!

Government has no business regulating marriage. It would have been even nicer to hear any elected official say so, especially from a so-called "limited government conservative Republican". This whole exercise proves that there aren't any smaller government Republicans in Indiana.

I hope this leads to more Democrats becoming emboldened enough to stand up for people living life their way in more areas of life. They might just find their soul along the way.
Posted by Mike Kole at 7:07 PM 1 comment:

Balko says: understandable motives, wrong solution. He's got it right. I learned firsthand that I could out-work my competitors by a mile and still not make a dent in the numbers without about a half million to spend.

I tend to agree with many of the editorial boards and campaign reformers troubled by the escalation in the money we spend on federal elections. Unfortunately, campaign finance reformers (and lobbying reformers) seem to be troubled for all the wrong reasons.

Nice as it may be to think otherwise, individuals, advocacy groups and corporations that give to political campaigns don't do so out of patriotism or civic pride. They donate because they hope to get something in return. It's not a gift, it's an investment.

Here's a failsafe prediction for Election 2008: The people who complain the loudest about corruption among the politically powerful will be the same people who want to give more power to politicians.

Link to full article.
Posted by Mike Kole at 12:53 PM No comments:

In these times, it can be bewildering to be a libertarian who believes that our government's foreign policy regardless of the party of the administration, too often takes us on hapless military interventions. Some Republicans are still clinging to Iraq. Some Democrats are pointing us to Darfur. So, the words of Joseph Sobran are of interest to me:

It's not quite on the mark. Democrats have been very happy to see US interventions overseas. Darfur is the latest place they would like to see us go (and how is that different from Iraq?), but Bosnia was under the Clinton Administration, as was Mogadishu. Meanwhile, Republicans created the largest entitlement program ever with the Medicare prescription drug package.

I think most Americans have become 'Sobran Moderates'. Unfortunately.

Here's a link to a treasure trove of libertarian quotes.
Posted by Mike Kole at 9:51 PM No comments:

The Indy Star had another maddening article on mass transit, and how the region is inching ever closer to taking this outrageously miserable plan and putting it into effect.

Here are a few points to ponder, especially if you are a proponent of light rail.

I ask these questions, because taxes are how mass transit systems are funded, from construction to operations. None pay for themselves. None.

So, it was interesting to read some of the quotes in the Star article:

Christine Altman, president of the Regional Transportation Authority and a Hamilton County commissioner, said the goal should be to develop a system that pays for itself.

"Money is still the number one problem," Altman said. "We're at a standstill. We can plan the best system, but if we can't implement it, we're not going anywhere."

The plan can be implemented, but only with a whole lot of tax dollars. If Altman doesn't know that mass transit doesn't pay for itself, she hasn't read any balance sheets of any system. IndyGo's balance sheets make plain that around 80% of the operating money comes from myriad tax sources. Observe this image from IndyGo's 2002 Annual Report: 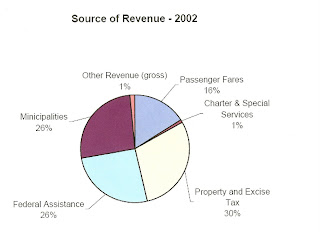 Passenger fares, 16%. Federal 'Assistance' means taxes. 'Municipalities' means taxes. 82% of this pie is tax dollars. The pie charts look like this every year, in every report. Why should a light rail system perform any differently than the bus system? In order for the bus to break even, fares would have to go to about $7-8/ride.

(Indy Mayor Bart) Peterson, a Democrat, said he supports light rail. It's a system in which more stops could be built for less, and it would require less up-front cash, which the city lacks. The regional authority he wants to control the project would consist of a bipartisan group of local leaders.

"I want to see us move forward with a rail-based rapid transit system, but I'm not sure yet if it's feasible," Peterson said. "We now have a structure in place to make it happen: the Regional Transportation Authority."

Again, it depends on what 'feasible' means to the Mayor. If 'feasible' means sucking $1 billion in tax dollars out of the people, then the thing is feasible. If you want to not chase out even more people of means from this region, then the project is not feasible. Perhaps, if the Mayor is getting his dictionary out, he should look up 'boondoggle'.

Undaunted by common sense or an ability to read a balance sheet, this nightmare appears poised to move forward.

A council of regional officials expects to decide on a specific route -- and transit system -- after 30 days of public hearings that could begin in October, said Amy Inman, project manager for a study of local rapid transit that is due in late summer.

I guess I'll have to start preparing my statements now. *sigh*
Posted by Mike Kole at 8:21 AM 1 comment: