Requisite Tax Frustration Statement
(Fishers, IN)- This one's going to be a little different. Usually I'm stomping the pulpit into splinters over the dollars I had paid over the course of the year for taxes. Yes, I'm still unhappy about it, especially because I paid more this year than ever before. But I think a large percentage of people tune such complaints out. There's no sympathy for one who paid a lot. It means that this taxpayer is "rich", and as we have all come to learn, there can only be antipathy for the rich, and guilt if you happen to be.
So, I'll take a different tack. I'll talk about my business and how tax considerations framed my thinking.
My business model is built around minimal overhead. I operate out of the home, I have very little in the way of expensive equipment. I do not have any inventories. This model allowed me to get straight into the work without having to take out any loans, which of course results in more overhead.
In August, I was really humming along in my one-man operation. I had so much work to do that I was routinely working 16 hours a day, and routinely seven days a week. That kind of grind gets old, and besides, the performance dips. It was time to consider hiring my first employee. Either that, or I would have to turn away work.
Not wanting to reject work, I strongly considered a hire. Problem is, it would trash my business model.
Of course, the employee salary would be pure overhead, but at least it would result in production, thus, revenue. Should I pay hourly? No- the work is unpredictable in terms of time requirements. I would have to pay per completed job. This would give me a predictable margin, in addition to creating incentives to complete sooner rather than later.
But that isn't all the drag I had to consider. I would have to pay Medicare and Social Security taxes on the employee's behalf. I would also have to pay Federal unemployment tax. And state unemployment tax. I would have to spend the time accounting for this, which means time I'm not producing. I could hire an accountant to free up my time, but then it becomes an expense- in violation of my business model.
There were other considerations. Could I afford to offer benefits? If not, wouldn't I have to pay more so the employee could purchase things like health insurance? How solid was my future looking? Could I really feel secure in my ability to ongoingly provide employment to someone who might have a family to support?
In the end, I decided not to hire and to turn the work away. For all the extra effort required, the prospect of additional income was so marginal as to be not worth the struggle. I did the math over and over, and this was the bottom line.
So, if you lack compassion for "rich people" like me, at least take stock of my tale and its ramifications: Taxes and compliance costs were the difference between growth and employment, and stagnation and underemployment. I'm fine, but somebody didn't get an opportunity. All because of the taxes and compliance costs.
I don't know at what point you can take advantage of scale, but it certainly isn't with one's first employee. I started playing it out, considering the extra employees firms hire and it seems crazy. We have companies who have accountants, HR staff, and other support- none of whom are productive, but at least free up producers to deal with producing, while these others manage pure overhead. I would have to grow to some 15-20 employees before I really could begin to take advantage of scale. What a struggle it would be in the meantime, teetering on the edge, in constant fear of recession!
To hire just one person, though, would be a wash. The employee would generate revenues, but my productivity would go down while overhead would soar. I might even lose money of the deal, especially when (not if) the workload decreased- as it has this year so far.
Well, I don't need that. Who does?
I'm not interested in building empire, especially not for its own sake. I like doing my work very much. I like producing and satisfying my clients. But, when I'm not working, which is to say producing, I like to do other things like travel, play with Isabel, read, play hockey, and a host of others. Doing accounting isn't on the list.
I'm sure I'm not the only one to face this dilemma. All I ask those of you who earnestly believe that all the government we have is necessary and important to consider is the cost-benefit analysis. How many people are not being hired because the costs reduce the margins enough to make the hire not worth the trouble?
If you cannot bring yourself to begin urging our elected officials to stop punishing success with taxation, at least BEG them to make the process simpler, and reduce the burdens associated with hiring.
Look around your workplace to see which positions are productive, and which are pure overhead. It will startle you. Our economy could be so vastly improved by eliminating the overhead and hiring for pure production.
Posted by Mike Kole at 6:48 AM 2 comments:

(Broadview Heights, OH)- I love the advance of technology. Every now and then, I get to thinking about an old friend, and I do a search on Google or Myspace, and it's amazing how I pretty easily find that person.

So, back in January, I got thinking about my old buddy, Chuck. We grew up on the same street. We wrote and drew our own peculiar take on Mad Magazine, which certainly scared our parents. We formed our first band together when we were 13-14. I pinch-hit on bass for some of the metal bands he was drumming in. Metal guitarists always wanted to play lead. I could have made a career playing bass for metal bands. Alas- every now and again, I showed decent judgment in my youth.

Anyhow, I hit Myspace and found a band he had been playing in recently. I left a message. Before long, we got to trading emails. Finally, after some 15 years or so, Chuck and I got together to catch up. 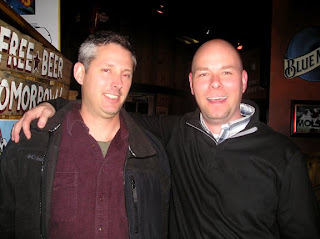 A reunion and a barrel of laughs!
What a hoot! I was armed with pictures and the old hand-drawn comics. We laughed so much it hurt.
Posted by Mike Kole at 10:37 AM 1 comment: