I'm very excited to report that the Libertarian Party of Indiana's Weekly Podcast is now available to anyone worldwide via the iTunes Store!

I had recently submitted the podcast feed information, and just checked a few minutes ago with the search 'Libertarian Party', and there it was.

If simply searching with the word 'libertarian', the podcast is currently #95 on the list. As more people download for free and subscribe, the podcast will climb the ladder and bee seen sooner by folks searching the random world of free libertarian podcasts. You know what to do.
Posted by Mike Kole at 12:27 AM No comments:

I've never been a big fan of Pepsi, as I was raised in a Coke household. I like Coke better because it's not as sweet as Pepsi. I'm sweet enough already, thank you.

So, this post may seem ironic, because I'm celebrating PepsiCo's "new" product line, their Throwbacks: Pepsi & Mountain Dew. Throwback? They're made with sugar rather than high fructose corn syrup. From an AgWeek report:

“We’ve known this is coming for some time, but the brands are on store shelves now,” Berg says. The product is available in Fargo in single 20-ounce bottles and Berg’s sources tell him 12-packs of 12-ounce cans will be on local shelves by May 1. The campaign is being supported by radio advertising.

No need to wait! I bought a 12-pack of Pepsi Throwback at the Target store in Fishers. If it's here, it's probably at your grocer too.

I go out of my way for sodas made with sugar. I sometimes get a Coke at the Mexican grocer, because they make it with sugar in Mexico. Passover is a good time to get Coke, because the sugar version is Kosher. I know the stores that have A&W root beer in the bottle, made with sugar (For instance, there is a Marathon off Exit 36 on I-65, that has A&W and Sunkist. When in Cleveland, I go to the Marc's stores. Etc.). So, having a sugar Pepsi in mass production, even if only for eight weeks, is sweet news indeed. 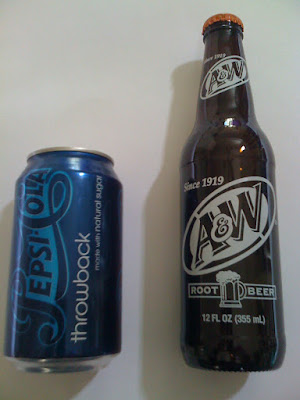 Sodas I savor. They have sugar instead of high fructose corn syrup.

The sweetening of drinks in the US is a result of politics. Sugar flat out tastes better than HFCS, but because there are tariffs on imported sugar making it artifically more expensive than it could be, HFCS is generally used instead, because its' price is artificially lower thanks to corn subsidies.
This Wikipedia link is a good springboard for sugar/HFCS reading.

For those who wonder what the fuss is in terms of drinking the stuff, here's your chance to find out. Line up a regular Pepsi with a Throwback and taste test them. The sugar sweetness is far less sticky in the mouth, and leaves me less thirsty than when I started. Drinking an HFCS drink leaves me thirstier than before drinking!