Garden Largely Planted
I got a chuckle out of the reactions to my Facebook comments that I had pretty much planted my garden, what with Fishers being relatively in the Deep South as far as all of my gardening friends back in Cleveland are concerned. Yes, we get a good jump on it way down here.
Funny enough, I planted peas and lettuce back on March 7. They can withstand the frost and snow.
Anyhow, I planted more lettuce and peas, spinach, red bell peppers, tomatoes, basil, oregano, and parsley. I still have to add cucumbers and cilantro.
My criteria for planting is unchanged from the last few years: We like 'em; I can grow 'em cheaper than I can buy 'em; the taste is superior to what we can buy; I can grow 'em easily, without pesticides. Last year's tomatoes were the champs of the garden, as they met all four criteria. They were amazingly good, as were the carrots. I had never had carrots with so much flavor. We found out how much flavor carrots lose in transit.
The herbs are wonderful, as they also meet the criteria. I used so many herbs in soups this winter that I added the oregano and parsley. We dropped broccoli and green beans, as the broccoli was absolutely eaten alive by the cabbage moth caterpillars. The beans were just kind of ordinary, and I can get that at the grocery store any time I please.
There's some variety within the things I plant:
Basil: Genovese and Lemon
Lettuce: Four Seasons, Black Seeded Simpson, Granada, Aragula, and Endive
Tomato: Brandywine... so far.
I have room for six more tomato plants, which I will plant in stages so as to stagger their output. I still haven't settled on which varieties to go with, although I'm thinking about these heirloom varieties: Black Krim, Martino's Romas, Purple Calabash, and Livingston's Golden Queens. Anybody ever grow any of these?
Posted by Mike Kole at 11:08 PM 1 comment:

Yesterday Was Tax Freedom Day!
I was surprised to learn that April 13 was 2009's Tax Freedom Day.
What is that? It's the day the average American is now working for himself. Up to this point, from January 1 through April 13, every cent you earned was committed to paying taxes.
The good news is, this Tax Freedom Day comes 8 days earlier than last year's Day. The bad news?

(1) the recession has reduced tax collections even faster than it has reduced income, and
(2) the stimulus package includes large temporary tax cuts for 2009 and 2010. Nevertheless, Americans will pay more in taxes than they will spend on food, clothing and housing combined.

Does anybody think it just that we spend more on taxes than food, clothing and housing combined? Please chime in if you do.
Again, this surprised me. The conventional wisdom is that when Democrats take office, taxes go up, right? 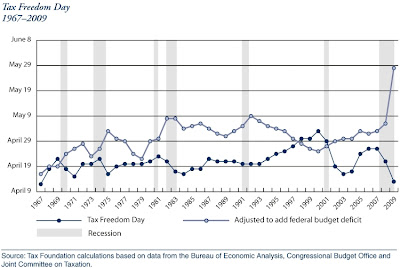 Oh, right. Smoke & mirrors. A shell game. Deficit spending. That which made Ronald Reagan a criminal. That which the glorious Clinton Administration didn't engage in. That which Democrats so recently campaigned against. Any cognitive dissonance, Democrats? Or, is all justified when the a guy wearing blue does it?
Posted by Mike Kole at 8:11 AM No comments:

I sat down with Travis Zellers for the latest podcast. Travis is the membership coordinator for the Marion County Libertarian Party, and is helping to coordinate Libertarian participation in the Indianapolis Tea Party.

Listen via this link to the podcast archive.

Because the Tea Parties are non-partisan events in which Libertarians will be joining forces with a wide range of participants, just like the recent Revolt at the Statehouse, I was interested to learn what lessons were learned to control our message, and to avoid negative associations being cast on some participating groups.
Posted by Mike Kole at 8:01 AM No comments:

Tea Party? Count Me In!

I will be participating in the Indianapolis Tea Party, proudly. Sure, the message isn't about 'taxation without representation' as it was in Boston back in 1773, but the spirit seems the same to me. It's about justice.

The Colonists objected because they lacked a literal voice in government and in the taxes that affected them, because it was unjust that they shouldn't have a voice. Tax protesters are up in arms primarily about the bailouts, started with the Bush Administration, and continued by the Obama Administration.

My position is that it is unjust to transfer wealth to private corporations, or individual citizens, to relieve them from the predictable outcomes of their bad decisions and often fraudulent actions.

I don't believe it was just that a single penny was sent to AIG, or Bank of America, or Fannie Mae or Freddie Mac, or to any mortgage holder. I do not want to see the Capital Improvement Board bailed out in Marion County, either.

It was wrong to wantonly print money in order to give it largely to politically connected friends, calling it 'stimulus'. It was unjust to devalue our currency this way when the Bush Administration did it, and unjust again when the Obama Administration did. It doesn't work, besides.

In sum, democracy can be a real sham on freedom when some citizens are declared losers by a majority of representatives, and others winners. It's worse than taxation without representation, because you want to have faith that your representative is one who defends you, rather than sells you out to some corporate interest that contributed mightily to his campaign warchest. As the Franklin quote goes, 'Democracy must be more than two wolves and a sheep voting on what to have for dinner,' yet that's exactly where we are. Representatives gather to decide who should have his pocket picked, for the benefit of another.

That should make any decent person mad as hell. Hence, a protest.

There are a few lessons that seem to have been learned from the 'Revolt at the Statehouse' from a couple weeks back, where the result was diffuse, and the Libertarians were singled out for mockery. I like these items from the Indianapolis Tea Party website:

RULES FOR A PEACEFUL PROTEST
NO STICKS ON SIGNS (Statehouse Grounds rule)
No violence, no racism, no law-breaking
Absolutely no obscene words or gestures
Treat Law Enforcement Officers with respect
Do not block sidewalks and streets with your bodies or signs
Avoid conflicts and any physical contact with any opponents. Our 1st Ammendment Rights are their rights, too
Take the high road....be CIVIL at all times

SIGN IDEAS
FRIENDLY REMINDER:
Stick to the point and stay on message! No abortion, marriage issues, or Obama bashing signs. We need to come across united and focused
Use black, red, or dark blue markers for visibility
Anticipate the adversary’s tactics and create a few counter-point slogans

These are the kinds of things protesters at large economic summits could learn a thing or two about. Seattle and Quebec come to mind. And, even though I agreed with their basic position, Iraq anti-war protesters have often lost me on some of their messages. I'm glad to see an admonition not to attack President Obama. The important thing is to focus on policy, not people. (More on that later.)
Posted by Mike Kole at 12:50 PM No comments: