Road trips with Steve are big fun for me. The hard part is leaving the family behind. The reunion is only a few hours off, but in Cleveland. 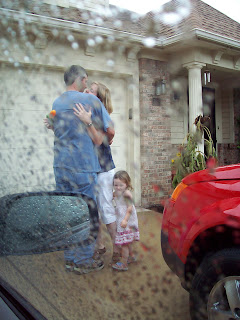 Ame and Isabel are already in Cleveland, and I'll leave Fishers shortly. My Dad is having a pretty serious abdominal/cardiac surgery on Monday, so we're going to be there for him and my Mom.

No telling when I'll be back in Indiana. I'm going to stay until his condition is stable.
Posted by Mike Kole at 12:27 PM No comments:

(Fishers, IN) After a week on the road, I finally turned my eyes to college football- and what do I see? Notre Dame and Michigan have lost again? While Ohio State won? I really am living the life these days!

So, 0-2 Michigan faces 0-2 Notre Dame, and the headlines on the Indy Star and ESPN all say, "Someone Has To Win". Says who? How about a nice tie? In fact, how about a nice scoreless tie? Let's see hightened futility for these two! How delightful that would be!
Posted by Mike Kole at 12:19 PM No comments:

I could do these for weeks. Maybe I will! For now, here are a variety of water-oriented photos. The first three are mine, the fourth is Steve's. Captions soon. 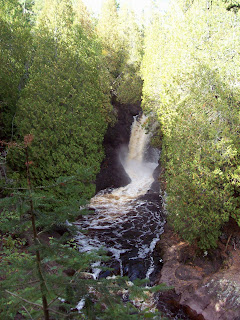 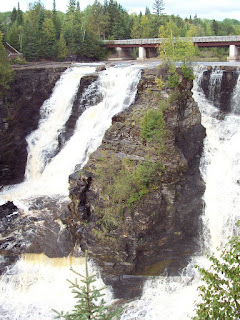 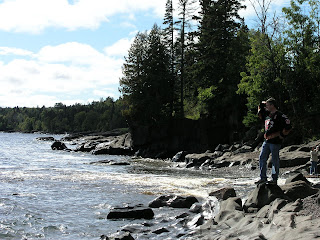 (Madison, WI) - It's been difficult to get wireless internet connections in the various places we've been visiting, so the posts aren't exactly on the spot reporting. That's ok. The main thing is the trip itself, of course.

Today's start was in Duluth, where temperatures were cool, but the cloudy skies did not mean anything more than sporadic rains. In any case, a little rain wasn't going to dampen a trip to Duluth's waterfront, where we were going to check out huge ships leaving the harbor, and trains carrying ore and stone.

A ship called the "Canadian Progress" left the harbor carrying a load of coal, for power plants or steel mills unknown. The US Army Corps of Engineers posts the expected times of arrival and departure for tankers, so it's easy to plan to be at the channel at the right time. Navigating these ships out of Duluth and into Lake Superior isn't nearly as treacherous as the course through Cleveland's Cuyahoga River "Collision Bend", but it's still fun to watch the trip. 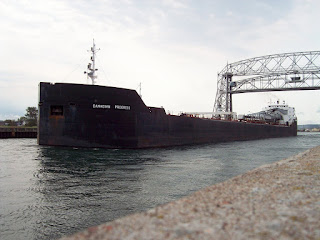 Hitting the road out of Minnesota and into Wisconsin revealed the best wildlife sightings of the trip thus far: Four bald eagles, several elk, deer, and dozens of wild turkeys. Neither Steve nor I had never seen a bald eagle in the wild before, so we were very excited at seeing one on the road, finishing off a deer carcass with the help of some crows. Only about ten minutes later, I spotted another perched atop a dead tree in a swamp. Steve stopped the car so I could approach for some pictures. As I made my way closer, a second bald eagle chased the first off its' perch, taking its' place. Unfortunately, in getting closer for better photos, both birds were spooked off, and they flew away. 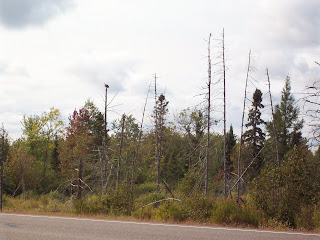 I wish I could have gotten closer, but the bald eagles didn't seem eager for my company

This was the first real serious backroads jockeying we did, and it really paid off. We use the DeLorme's Atlas & Gazatteer series of maps. These are backroads maps, created with road trips in mind. DeLorme's publishes an edition for most states. They aren't great for city travel, but they really help you find alternates to the highway that make up in scenic beauty for whatever time might be sacrificed. I recommend them highly. 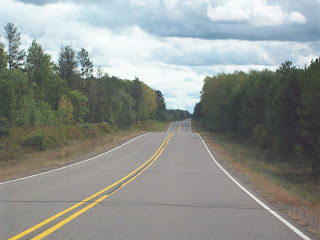 The road less travelled, in northern Wisconsin.
Posted by Mike Kole at 11:20 PM No comments:

(Duluth, MN)- Here are some pics, courtesy Steve Wainstead, of my interview with Craig Coxe. I met with Craig in Harbor Springs, MI: 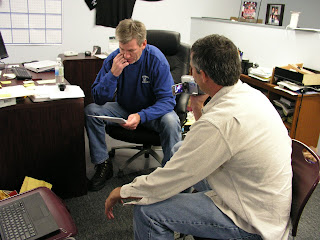 Craig studies a printout of his NHL fights, as compiled on www.dropyourgloves.com 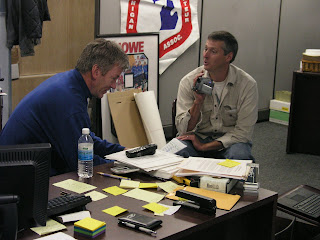 Funny to see Craig react to the list. Users vote on winners and losers. "They really thought Kimble beat me?" We laughed. 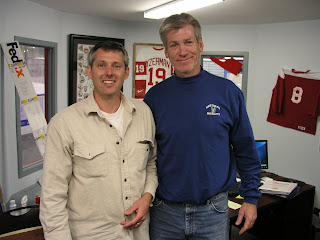 Craig & I, posing for the camera. Craig Coxe is one tall man.
Posted by Mike Kole at 12:31 PM No comments:

(Thunder Bay, ON) - Some of my pics of our flight from Charlevoix to Beaver Island. This is a small handful of the 70 or so images shot from the plane. I was especially pleased with a 20-shot study of the landing gear against the surface below. I selected three favorites here. 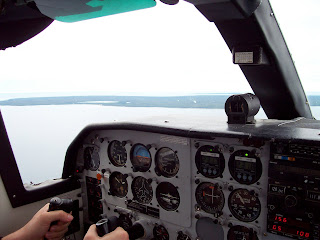 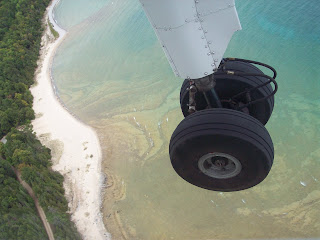 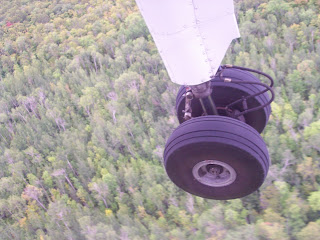 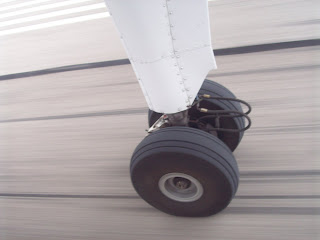 Email ThisBlogThis!Share to TwitterShare to FacebookShare to Pinterest
Labels: Beaver Island, Charlevoix MI, photography, road trip
On The Road, and In The Air

(Sault Ste Marie, MI) - Quite a day yesterday, despite missing on Mark Rutherford's pointers for the Charlevoix area!

The interview with Craig Coxe at Springs Harbor, MI was about the best I've ever had with an athlete. Many, many thanks to Craig for taking the time (about 90 minutes!), his enthusiasm, and for being so open about every topic. My experience had always been that hockey players are more humble and forthcoming than other pro athletes, such as NBA, NFL, or MLB players. But Coxe was so accommodating, and truly a fun interview. I can't wait to transcribe and even to begin posting some video interview clips.

From Springs Harbor and after lunch, we went back to Charlevoix so that we could get a ferry boat or plane to Beaver Island. We struck out on a couple counts. On Mondays this time of year, the ferry makes only one trip to and fro- and had already made it. We really wanted to enjoy each available mode, water and air. Well, water wasn't available, so we agreed that it would be better to fly each way than to miss out on a trip to this remote place. We got to the airport and learned that there was only one round-trip remaining in the day. We would take it, but these would be back-to-back flights- only a 15 minute wait between trips!

It was totally worth it! On the flight out, I was the last to board, so I sat next to the pilot on a very small twin engine propeller plane. I was extremely nervous, but went with the thrill. Took many pictures from the air. We hit the ground, chatted up local Islanders for ten minutes, then boarded again to skip back to mainland. Steve sat next to pilot for the return, and I sat at the back, shooting a collage of the plane's interior and a series of shots down to the surface. It was a study of the fixed landing gear and whatever was below: Lake Michigan, treetops, a quarry, the runway, etc. I'll load some of these later.

In the late afternoon, we drove up to Sault Ste Marie, deciding to stay in Michigan one more night before crossing into Canada. We went to Kewadin Casino, which is run by the SSM Chippewa Indians. I'm usually pretty down on non-Vegas casinos, but this one was very good. It had a huge number of slots, and a fair number of table games. But here was the best part: $1 video poker was 9-5, and the texas hold-em table was 1-2. What's that mean? High payback for longer play on slots, low stakes entry on poker. So, Steve and I could play and not feel like we were going to break the bank.

Actually, we both left with more money than we started. That usually doesn't happen, but Steve doubled his money on roulette, and I won a small amount on hold-em. We had a real laugh at the end of the night, when I was simply trying to get a metal $1 token for my dad. I put a $5 into the video poker machine with the idea that I would take one or two out of the five and play the rest, probably losing them. I got two nice ones, but then kept winning small hands- two pair & three of a kind. I would play, win, cash out, look at Steve, and we would laugh... and repeat. Nothing big. I left with ten buck, plus the two tokens. It was just the situation- no investment in winning, yet doing so.

Today we'll make tracks, trying to get to Thunder Bay. Of course, we never know what may divert our attention!
Posted by Mike Kole at 6:56 AM No comments:

(Traverse City, MI) Several years ago, I would take a crazy road trip with my best friend, Steve. I looked up and found that it had been nine years since we took a road trip! Fortunately, it all worked out so we could do a trip that had been long-standing on our list: a circle tour of Lake Superior.

Ultimately, the plan is for a figure-eight tour: North from the Indy area, through Michigan along the western coast of Lake Michigan; then heading west theough Michigan's Upper Peninsula along the southern coast of Lake Superior, to Duluth, MN; then east along the northern coast of Superior; then west again through the UP- this time on the southern coast above Lake Michigan; then south through Wisconsin, Illinois, and back into Indiana. Route will vary on a whim- any time, any where, for no reason at all. About a week, all told.

Steve flew in from New York to Indy on Saturday. Ame and I showed him Hoosier hospitality with a nice dinner that included veggies from the garden and Indiana pork. Sunday, we hit the road.

Starting in Fishers, we meandered through Hamilton County, passing a bison farm on Six Points Road, just south of 296th. We meandered through Tipton County and got onto US 31 in time to let Steve feast his eyes on the famed Sherrill's "Eat Here and Get Gas" sign.

US 31 is a straight shot to Canada, but we did jump off from time to time to check out various sights. One misadventure was in Niles, MI. I truly thought that there was a tavern on trackside, full of railroad decor and a dining caboose. I was mistaken. My memory failed me. We asked around town- even at the Amtrak station- and everyone was stumped. Well, it had been ten years since I had been to that tavern, on a long work detail. On reflection, I think it's in Sturgis, MI. Who knows? I'll have to dig through my old photos.

Steve was astonished by the cheap land prices in Mi. $10,000/acre sounds ridiculous to a New Yorker. This was for property within 1,000 feet of Lake Michigan, north of Muskegon. Fun listening to him laugh at the prices.

We ended up in Traverse City, where the temperatures are lower and the wind is gusting. Today's adventures include an interview with former NHL player Craig Coxe, and a day trip to Beaver Island.

Could be trouble ahead- I forgot to bring my birth certificate and passport. I don't know if this will pose problems getting into Canada. I suspect that it might. If so, it would severly alter the pre-trip planned course, potentially eliminating the north shore of Lake Superior in Ontario. That would be a bummer. I was hoping to stop in Thunder Bay, and to take in the sights along the way.
Posted by Mike Kole at 6:27 AM 3 comments: