I used to be far more connected to Libertarian candidates around the state. Running for statewide office and actually campaigning statewide will do that for you. In 2006, when I ran for Secretary of State, Libertarians were improving in many aspects of their campaigns, but endorsements from media outlets were very few.

This has been changing of late. I found that the Richmond newspaper endorsed Libertarian Matt Hisrich for his bid to win a City Council seat in District 1- in favor of a long, long-term incumbent.

Matt Hisrich, Libertarian candidate for the District 1 Richmond Common Council seat, served on this newspaper's editorial board for a time. He left behind a lot of good impressions as a thoughtful, intelligent, caring individual who knew how to ask the right questions, challenge conventional wisdom and, in so doing, advance the best interests of his community.

When he ran last year for office in Wayne County government, we regretted that his single-issue zeal against the economic development income tax rendered him less than effective on a host of other issues facing county government.

But, oh, what a difference a year, and a failed campaign, can make. Hisrich is back, articulating a host of positions, including jobs, which should render him attractive to residents of District 1 and the entire city.

That is a tall order in a district where Jack Elstro, the Democrat, has served with compassion and dedication pre-dating the 1968 Richmond explosion. This then is a bouquet, a thank you, to Jack Elstro for that record of service as much as an endorsement of the challenger whom we think possesses the talent, know-how and commitment to help move this city forward.

One thing I found interesting is the preference for a wider platform rather than a narrower one. For many years, Libertarians have been trying to simplify message, often getting bogged down in too broad a platform, including items that would be outside the scope of office. Certainly, I was annoyed as a candidate running for an office like Secretary of State, when I would face a battery of questions about abortion- an issue the Secretary of State cannot affect in any way, shape, or form. Looks like Hisrich hit the happy medium here of a broad spectrum of issues within the scope of the office. Well done!
Posted by Mike Kole at 9:17 AM No comments:

Archives In The Hall

On Friday, I did take my collection of radio show tapes to the Rock 'N' Roll Hall Of Fame's library and archives for storage. Many thanks to Archivist Dianna Ford, who took such an interest in the materials, and gave a really great tour of the facilities. As you might suspect, they have some amazing artifacts in there!

My first stop was to WCSB. I'd call it my old stomping grounds, but the studios have relocated from CSU's Rhodes Tower over to the Cole Center. All of my shows were broadcast from Rhodes Tower. The old studios had walls lined with cork, for sound absorption. It had a peculiar smell, and if you spent more than a half hour there, you went home 'smelling like the station'. Student Media Specialist Dan Lenhart left a WCSB t-shirt with Randy Allar for me to wear at the Hall. 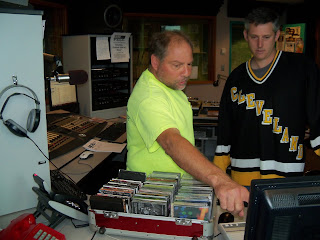 Randy Allar once trained me in radio production. Not long after, I was training students in production as well. Here Randy shows me the layout of the 'new' WCSB.
This was a very proud moment for me. I was initially floored to even have the request made of me. My shows were never the most popular when they ran. They were respected, enjoyed, useful, educational- but never the top show. I was always lurking somewhere in the shadow of Steve Wainstead, who always seemed to have the top show whenever he was on. This is a great shadow to be lurking in, to be sure. Second to Wainstead is still high atop the mountain. But while I've foregone popularity in other areas of life, I always felt somewhat under-appreciated... Is that even the right word? Anyhow, I always seemed to want some kind of recognition that, yeah, you're doing good work there, Kole. Well- here it is! 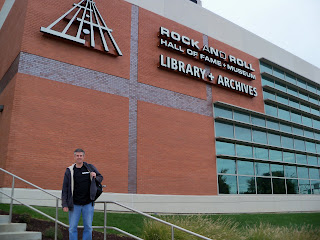 The Library & Archives of the Hall is separate from the main museum, and is attached to Tri-C's campus at 30th & Woodland. I was told that eventually, the library will be open to the public. Visitors will be able to read and listen to stored materials (won't be able to check them out, though), including my shows. I'll be very interested to go back once it's operational! 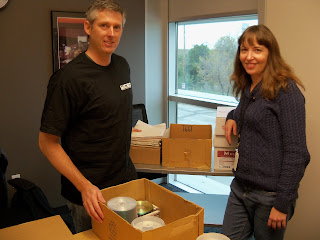 Archivist Diana Ford accepting the first installment of my collections. The original cassettes and playlists will be kept forever at the Hall's Library & Archives. She and her staff will transfer the music from the CD copies I made of all the cassettes. She was very happy that I saved her a lot of time. I joked that I wished I knew that she wanted the materials two years ago, when I started making the dubs. 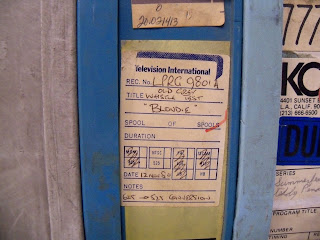 When Dianna Ford took us on a tour of the archives, the very first thing I saw was a shelf full of film canisters. I would so love to see this. It's the original!
So- why did I never pursue radio in Indiana upon arrival in 2002? Well, I was spoiled by my experience at WCSB. I always got to play whatever music I wanted to. 100%, absolutely everything was at my discretion. You don't generally get that luxury in commercial radio settings. Why not political talk? It doesn't really pay that well, for one thing. Most starting talkers have to make appearances in order to supplement their radio paychecks. I'd done that before, in Cleveland, when I was doing sports at WHK, ever so briefly in 1994-95. I knew right away that it wasn't the way I wanted to make a living.

So, I podcast when I'm so inspired. It's a beautiful thing. About $300 in equipment gets you up and running, and I can record a show whenever I feel like it. Listeners can subscribe on iTunes and get the show files downloaded when they are issued. My current podcast is definitely just for fun. If it never gets any recognition, I'm very cool with that.
Posted by Mike Kole at 4:00 PM No comments: