Being that I've been underemployed over large stretches of the past three years, I have availed myself of the opportunity to do some odd jobs to pick up extra cash and generally keep like I'm a productive member of society. Usually, these are menial tasks. For instance, I recently sealcoated a friend's driveway. As much as anything, this served to remind me that sealcoating a driveway in 95 degree heat is a young man's gig. But it was satisfying to hustle and sweat, and especially to complete. 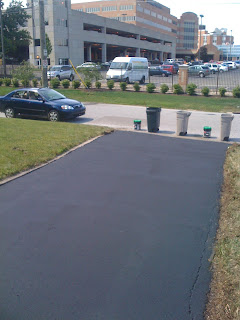 Another gig I picked up for a while was to work in a bar. A friend needed help plugging holes in his staff, so I lept into the breach.

I ended up doing everything except tend bar. You need a license to do that, so I made myself open to doing anything else. The one thing I really enjoyed was cooking. I like cooking at home, so why not? A cook failed a drug test, coming up positive for cocaine, so Mike The Cook was in demand. 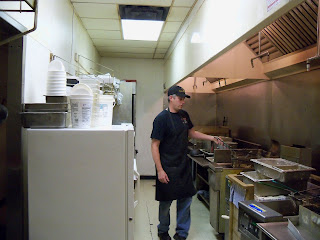 It's different cooking in a bar. Everything I cook at home is from scratch, and I rarely use salt. I don't fry anything at home apart from eggs, and the majority of the menu was fried food. French fries, shrimp, cheese sticks, fish patties, and a whole lot more... pickles even- drop the basket into the oil, pull it up in 2 minutes, maybe 3, maybe 4. It hardly matters. Very little was from scratch, and much of it used salt. Even the burgers.

Some customers wanted their chicken wings crispy. Normally, the wings are cooked for 10-12 minutes. 15 makes for crispy. I had one customer ask me to double the cooking time, so that they were really crispy. After 30 minutes in the fryer, I couldn't see any appreciable difference. I couldn't imagine waiting 30 minutes for chicken wings.

One thing I learned about cooks who make $10/hour is that these aren't people who are paid enough to care. The job is simple enough. You have rushes at the dinner hour where you are jumping around trying to get all of the orders fulfilled without missing anything. But for the rest of the night, it's a pretty leisurely affair- an order here, and order there, plenty of time to do things like fill salad dressing cups or clean the surfaces.

Those are things cooks making $10/hour either don't or won't do unless browbeaten. I'm not sure why. It was boring as hell to stand around in the kitchen when orders weren't coming. Yes, I reconnected with Classic Rock Radio. But you can do that while refilling the kitchen freezer with portions, so that the next shift's cook isn't screwed when he comes in. I couldn't understand. All of the cooks bitched about how the shift before screwed them by leaving a mess and portion trays empty... and then they left things a mess, and the portion trays empty.

I took on one fryer as my special case. This was a pressure cooker that was used to make 'broasted chicken'. I don't eat fried chicken anymore as a general rule, but I decided to try the foods I was cooking, just to be able to talk about them if a customer asked questions. The broasted chicken was wonderfully delicious. I gained 8 pounds in the month I was there. Anyhow, this fryer had once caught fire, and there was a 24" black spot on the side, which was grease that was entombed onto it, burned by the fire.

First, I cleaned the caked on grease from a pressure meter on this fryer. It was remarkable! The thing looked like new, and it only took about 15 minutes with a liberal application of elbow grease to scrub it clean. I decided to not clean anything else on the fryer until someone noticed. One of the cooks finally did notice, and told me, "Looks like we got a new meter on this fryer. That's good, because it was getting hard to see the needle through the grease." 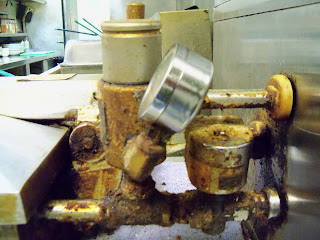 The hours are horrible, of course. Indiana bars can stay open until 3am, and this one does. The kitchen is open until 10pm Sunday through Thursday, but 2am on Friday and Saturday nights. Add another half-hour for clean up, and 40 minutes for me to drive home, and that made for comings and goings in the Kole house. I got about 2 hours sleep on Saturday nights before Ame had to go to work on Sunday morning.
Posted by Mike Kole at 7:57 AM 3 comments: Links to this post

Not Applied Across The Board

With the USPS faltering, somebody there seems to get economics. Rather than raise the prices of postage yet again, thereby driving away yet more business, the USPS has announced plans to cut a good number of retail outlets. From an Indy Star report:

Nearly 100 Indiana post offices are included in the U.S. Postal Service's list of facilities it will review as it looks to cut costs.

The financially-troubled agency announced today that it will study more than 3,600 offices, branches and stations for possible closing. Some sites might be replaced by stores, libraries or government offices that offer postal services.
...
The postal service lost $8 billion last year as more customers shifted to online mail and the recession cut advertising mail. It currently operates nearly 32,000 retail outlets across the country.

Hmm. Austerity. Cut bits in order to preserve the whole. Huh. What novel thinking about a governmental agency. It's almost like a lesson was learned about how applying all the focus upon working to generate more revenue just results in scaring it away. Isn't that interesting? What next? Dropping the price of postage in the interests of increasing volume? That would be all kinds of crazy.

Maybe, just maybe this kind of approach could be taken to much more of the Federal government.
Posted by Mike Kole at 6:24 PM No comments: Links to this post

My Two Cents On The Debt Ceiling

Some essentials:
I find the whole battle to be pure theatre, and am really blown away by how so many on either side think this is a gigantic, meaningful political battle. It isn't.

If anything, it shows me how successfully the forces for big government have won the debate. When the 'debate' is over whether to cut $30 billion or $60 billion, in the face of spending more than $2 trillion, it is clear that big government is committed to in full.

So, when I see pundits arguing strenuously about how we're about to eviscerate the government's social programs, or really tackling the tough issues, I'm left wondering if such efforts are a result of having no grasp on reality, no sense of perspective, or just propaganda.

Now, if at my Walter Mitty best, I woke up and found myself Obama, I would start by ending the wars. Iraq, Afghanistan, Libya? Done. Troops home in 90 days or less.

The public showed an appetite for ending Iraq 3 years ago, and elected a candidate who promised to end it. So make good. The public supported Afghanistan on the bogus pretext of getting Bin Laden. That's done, so the pretext is gone. And nobody was clamoring for a war in Libya. That looks like an attempt to distract, at best. So, over the 'harumpf harumpf' noises of the right, this could get done.

That isn't all that really needs to be cut, by any means. But if I was president, I'd have worked towards the kind of deal with ending the wars as the centerpiece, leaving the precious entitlements alone (as happened in 1995, because the GOP then realized that the big government conversation was settled), leaving the tax cuts in place, giving everybody a little something, but doing something that would really help our country in several ways.

As a side note, I'm still really surprised how Obama has emerged as a poor communicator. He had the press eating out of his hand by the time of his inauguration. He really didn't cultivate that the way he could have, just by having more frequent press conferences. To me, he appears to have been hiding from the press, which makes absolutely no sense.
Posted by Mike Kole at 8:20 AM No comments: Links to this post