Big Fun With Alex
(Sierra Vista, AZ)- As dumb luck would have it, I missed a turn exiting Tucson's airport en route to I-10, and in so doing, I discovered a tremendous airplane boneyard.
This was no ordinary collection of mothballed planes. These were mostly military planes- fighters and transports, mostly American but also Soviet MIGs. I had discovered the Pima Air and Space Museum. Alex was going to love this!

Alex is currently entertaining the idea of becoming a pilot. As we entered the grounds Friday afternoon, two gray planes roared above, having just taken off from the nearby Davis-Monthan Air Force Base. He immediately identified them as A-10 "warthogs", and described their purpose in combat. He looked down at the map of the grounds and didn't know where he wanted to go first. 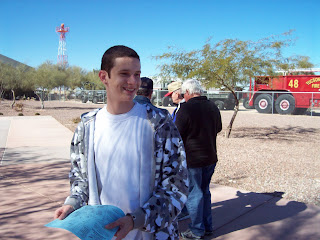 This is a father's joy. 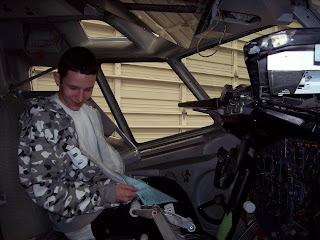 Alex repeatedly said, "I could spend all day here," meaning, in this cockpit. 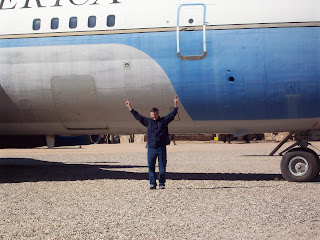 Dad recreates Richard Nixon, in front of a retired Air Force One.
We spent about four hours here. I can't remember the last time I saw him smile so much.
Posted by Mike Kole at 9:20 AM No comments:

What's Wrong With Government
(Sierra Vista, AZ)- Ok, this is the excerpted Reader's Digest version...
One of the things I find most wanting today is the absence of consistent thought, and the development of solid ideas into public policy. One of my favorite quotes is of John Adams:
"A government of laws, not of men."
This means, not a government of personalities, of popularity, or any other whimsical nonsense. Personality and popularity is fleeting and ever-changing. Solid law based on solid principles gives the opportunity for clear understanding and thus clear footing.
Reading recent posts by Hoosier Pundit and Doug Masson on the crafting of property tax legislation brought this all to mind, as it focused on the importance of three figures: Governor Mitch Daniels, Republican State Senator Luke Kenley, and Democratic House Leader Pat Bauer.
It's ironic. They're drafting law. But it is illustrated here that we are a government of men first, with laws resulting secondly.
I could stand it if there was great clarity where either of these three men stood on the issue. Kenley in particular is a "stick your finger in the air and see which way the wind blows" kind of man. For certain, none of these is a statesman. Oh, for a statesman or two!
I'd much rather see solid competing IDEAS, rather than these three egos, and the kind of horsetrading they will marshall. Let's talk about abolishing the property tax. Let's have a discourse about the things the property taxes fund.
The dialogue should be much more than, "what can we do to look it make like we've created tax relief all while maintaining the funding status quo." That's what it has all come down to, and it is because we are a nation of men, not of laws.
Posted by Mike Kole at 9:40 AM No comments:

(Sierra Vista, AZ)- 16 years ago today, my son Alex was born. I'm visiting with him for an extended weekend to celebrate. 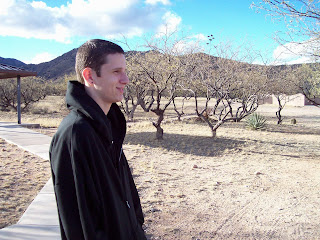 We took a short hike at the Kartchner Caverns State Park. The Whetstone Mountains loom in the background beyond the nearby Mesquite trees and cacti. 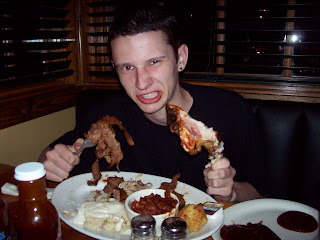 Alex, the two-fisted meat eater. The birthday was celebrated with a dinner at the El Paso Bar-B-Que in Sierra Vista. He was in his glory, with a trio of smoked meats: chicken, brisket, and pulled pork.

We're planning to check out Tombstone (site of the Gunfight at the OK Corral) and Bisbee (an old mining town), and will probably cross the border at Agua Prieta, Sonora for a look around.
Posted by Mike Kole at 9:26 AM No comments:

Frankly, I thought it would be Rudy Giuliani out of the running on the Republican next, but alas, Fred Thompson called it quits today. From CNN's report:

Thompson played to the voters as a staunch conservative and a son of the South. While he did draw some evangelical voters from one-time Baptist preacher and former Arkansas Gov. Mike Huckabee, it wasn't enough to pull him into contention for the nomination.

He finished with 16 percent of the vote. Sen. John McCain won Saturday's contest with 33 percent, followed by Huckabee with 30 percent.

"He's really been good lately, but it's too late," CNN analyst Bill Bennett said of Thompson after South Carolina returns started to come in. "If you're a Southern conservative and you can't make it in South Carolina, it's over."

Also, if you aren't running on anything distinct, like say a consistent set of ideas, and you aren't near the top, it's over. So far, Romney and McCain are getting away with a lack of the former.

Email ThisBlogThis!Share to TwitterShare to FacebookShare to Pinterest
Labels: Fred Thompson, John McCain, Mitt Romney, Republican convention, Ron Paul, Rudy Giuliani, tent folding
Rare, Honest- Refreshing
I was bowled over by a CNN article, on it's own news story.
It's very rare that I'm going to be interested in that kind of story. News that talks about itself? That's usually self-absorption on the order of an American Idol contestant, and thus, not at all interesting. But since it may signal that finally, FINALLY, on the day after the holiday to celebrate the memory of Dr. Martin Luther King, Jr., finally CNN and other mainstream media may begin to be getting the greatest essence of King's great speech:

I have a dream that my four little children will one day live in a nation where they will not be judged by the color of their skin but by the content of their character.

You see, CNN and all the other major media tend to denote Barack Obama as the 'black candidate', and Hilary Clinton as the 'female candidate', at least implicitly. A recent CNN article promoted this 'vision' as the main way for black female voters to look at the Democratic primary in South Carolina, with race and gender the only factor; issues a non-factor, John Edwards a non-factor... nevermind for Dennis Kucinich. Choose: a female president, or a black president.

In the context of Dr. King's words, or any other intelligent context, it's appalling. But, it's refreshing that CNN viewers and website readers rebelled. It's just as refreshing that CNN had the courage to create an article out of the acknowledgment of their stupidity. That's the sort of accountability in media I would like to see more regularly, so kudos to CNN.
The email response is just marvelous. Here's just one message:

An e-mailer named Tiffany responded sarcastically: "Duh, I'm a black woman and here I am at the voting booth. Duh, since I'm illiterate I'll pull down the lever for someone. Hm... Well, he black so I may vote for him... oh wait she a woman I may vote for her... What Ise gon' do? Oh lordy!"

Tiffany urged CNN to "pull this racist crap off" the Web site and to stop calling Hillary the "top female candidate."

The entire articles are worth reading. And if you didn't yesterday, read the entire text of Dr. King's great speech. Then remember: 'content of character', and think about the policy they would promote.
Posted by Mike Kole at 6:07 AM No comments:

I was happy to see RP's high finish in Nevada. Sure, it isn't a win, but if you don't win, you can do worse than second- just ask Rudy Giuliani. The newsletters were a real downer, but even with that baggage, Ron Paul is really the only candidate talking about liberty, so I have to hold out hope for him- at least until the Libertarian convention in May.

"Essentially, McCain did it on a personal vote. It wasn't ideology; it wasn't issues. It was a vote for him personally, which has always been his strongest appeal," Schneider said.

Gosh, that gives me a warm fuzzy. If the last two presidents taught us anything, it's that ideology and issues matter. Give me the flattest, dullest personality possible with the right ideology, and the country will go far.
Posted by Mike Kole at 1:57 PM No comments: