I'll never forget the experience of driving through Silicon Valley in 1998. Upon entering the area from the north, the highway driver was greeted by signs proclaiming the presence of HP, Intel, and a host of computer and tech company billboards. It was actually an exhilerating experience. The billboards let you know you were in the midst of something exciting and on the cutting edge.

Contrast that with the attitudes of billboards in Indianapolis. From an Indy Star report:

Norman Pace, land-use chairman for the Marion County Alliance of Neighborhood Associations, said he had waited eight years for the signs' demise. Thursday, he drove from his Warren Township home to the north split, the junction of I-70 and I-65 on the north side of Downtown, to watch the sign be dismantled.

"It was an eyesore blocking our city's beautiful skyscape," Pace said. "It detracted from the quality of life here. We don't want to look like one of these cities that are filled with billboards."

Pace and other billboard opponents call the signs "litter on a stick."

No, you sure wouldn't want Indy to resemble a vibrant place like Silicon Valley. So much better to make it look like the kind of place not worth advertising to.

Interestingly, the cityscapes are often decried as a kind of litter that hides the natural beauty of the environs. I realize that in such places there are mountains, hills, molehills or any other kind of terrain. The point is, eyesores, like beauty, is in the eye of the beholder.

More importantly, freedom of speech suffers. I looked at the First Amendment, and while nowhere does it say "except for billboards", it also says "Congress shall make no law". Is this cause for celebration among the state's rights crowd? Maybe I'll get an explanation here.

The United States First Amendment theoretically grants absolute freedom, placing the burden upon the state to demonstrate when (if) a limitation of this freedom is necessary.

Commercial speech is still speech. So, was it necessary to remove the billboards? I'd love for Indianapolis to have to make the case to a higher court. To bad Pinnacle, the billboard company, won't be suing. From the Star:

Pinnacle has gone out of business, and an attorney for the company said that happened because the company lost the revenue the signs would have generated.

This action was begun under the Peterson Administration. Too bad Mayor Ballard hasn't done anything to reverse course here.

Indianapolis- killing speech, killing businesses. There's a motto for a billboard at the city limits.
Posted by Mike Kole at 6:28 AM 3 comments:

Ame and I are originally from Cleveland, and we return there to visit relatives. One thing I will be sure we don't do is spend money in Cleveland for several years to come.

Cleveland is one of those cities that uses traffic enforcement cameras as a revenue generator. Ame passed the cameras on Chester & E 71st, an unsavory area if there ever was one, going 52mph in a 35-zone. The pictures were provided on the "Notice of Liability", and they show that nobody was in the area, and nobody was in harms way due to Ame's rate of speed. 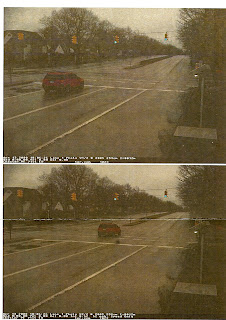 Where is everybody? Oh yeah- they've fled the authoritarian nanny hell that is Cleveland.
This may rankle some of my absolutist pro-rule of law friends, but this is bullshit. The purpose for traffic law is to ensure the public safety. If nobody is made unsafe by the passage of traffic, what is the point of enforcing the law? Cameras are blind to circumstance. Police officers use discretion, and it's highly unlikely that an officer on the street would have pulled her over for this infraction. Obviously, this is mere revenue generation.

So, OK Cleveland. You get your $100 fine. What you won't get from me is a visit to the West Side Market for a few years. Nor will I eat in any restaurant in the city for a few years. You got $100 out of us now, but will not get $1,000 or so, thanks to the ill-will generated by this crap. Enjoy.
It will be a happy day when someone gives the camera's poles the 'Cool Hand Luke' treatment.
Posted by Mike Kole at 9:22 AM 5 comments:

The former Georgia Congressman is seeking the Libertarian Party's nomination for President. Barr made his announcement today. He's already viewed as the presumptive nominee in some media quarters. From the LA Times report:

Expected to win the nomination of the Libertarian Party when it holds its convention in Denver over the Memorial Day weekend, Barr, 59, criticized Republican John McCain, the presumptive GOP nominee, for not being a true conservative.

"There's not a great deal of substance there in terms of a commitment to cutting the size of government," Barr said He said no one who had authored the McCain-Feingold campaign reforms that cap individual donations could call himself a conservative, "at least with a straight face."

Here's what sets Barr, or any other Libertarian candidate apart from the other three- sound fiscal policy:

Saying both the Republican and Democratic Parties have "bought into a system of running a charity called the United States of America," Barr blasted programs that use public funds to educate the children of illegal immigrants and maintain foreign military bases "that have no more efficacy in the 21st century."

"The federal government needs to get away from the notion that simply because we have all this money in the Treasury -- or we can borrow more money -- that we can provide all these services," he said. "That is not responsible government."

Strategically, I like that Barr knows what to say in response to the "Nader Effect" that worries some confused small government folks:

Barr confirmed that he was asked by McCain supporters not to run for fear he would pull votes from the GOP, but he defended his decision by saying that "American voters deserve better than simply the lesser of two evils."

Arguing that in recent election cycles, the losing candidates "blame somebody else," Barr said, "At the end of the day if I do succeed, it is not my intent to blame Sen. McCain or Sen. (Barack) Obama. I hope they would return the favor." If McCain loses to Obama, the Illinois senator, Barr said, it will be because his message or his candidacy doesn't resonate. "Each of us has the future in our own hands," he said, adding that his voters "are not likely to fall in the category of being enthusiastic about voting for John McCain, if such exists."

Fact is, there will only be one small government candidate available to voters in November- the Libertarian. McCain, Clinton, and Obama all believe in using the power of government. They merely have different recipients of the largesse. Besides, just as Dr. Eric Schansberg took votes from Democrat Baron Hill and not Republican Mike Sodrel in the 2006 race for Indiana's 9th District House race, Barr or any other Libertarian candidate stands to see more votes come from otherwise Democratic voters. Republicans know it to be true:

But Christopher Barron, a Republican political consultant, thinks it is equally plausible that Barr could hurt Obama.

"I think Bob Barr's candidacy could impact the race -- but I don't know at this point which candidate he is likely to help or hurt," he said. "If Barr's candidacy is fueled by the same people who supported Ron Paul -- college students, antiwar advocates and hard-core libertarians -- then I think it is unlikely to hurt Sen. McCain in any significant way because these are not the type of voters McCain is reaching out to. I could actually envision a scenario under which Barr's candidacy actually helps McCain by siphoning off some of the enthusiasm among college voters and antiwar advocates for Obama."

Barr's website is up and running, and is already miles better than any other LP presidential candidate's.

Best of all, Barr is a great choice for getting the libertarian message out. He doesn't carry the racist baggage Ron Paul alienated so many with. He's reformed his thinking on big government positions he used to hold.

This is a good day. I'm satisfied that if Barr is nominated, the Libertarian Party will have a candidate to be very proud of.
Posted by Mike Kole at 3:23 PM No comments: