Although I did not write this morning's short Indy Star editorial, I could have:

No guts in Congress to make needed cuts

Our position: Failure to vote on spending cuts is another sad reminder of Congress' lack of courage.

With the federal government's expenses soaring, in part because of the billions of extra dollars needed to rebuild the Gulf Coast in the wake of three powerful hurricanes, Republicans who control the House by a healthy majority have put off voting on much-needed budget cuts. Majority Leader Roy Blount hopes to round up enough support in his caucus next week to finally stage a vote.

But there's clearly little appetite in Congress for making hard decisions when it comes to the budget. In the summer Congress passed a highway bill loaded with waste, including giveaways to private enterprises like The Children's Museum in Indianapolis. Despite widespread appeals, congressional leaders have steadfastly refused to reopen the bill and shift money to more pressing and appropriate needs.

The federal government simply can't afford to do it all. Sadly, the folks running Congress show little evidence that they have the courage needed to make the choices.

Well, the GOP has gotten to enjoy throwing pork to people back home - the bridge to nowhere in Alaska is the quintessential case-in-point - because unfortunately, throwing pork buys votes.

The Star should have put Indiana state government on par with the Congress, though. Just as the Federal government features a Republican chief executive and Republican domination of both houses, so goes Indiana. Did we even cut the Indiana budget by a measly 1%?

No. Where's the courage, indeed.

I met with another excellent College Libertarian group last night, in Grant County, on the campus of Indiana Wesleyan University. It was my distinct pleasure to speak with them about my campaign, the role of the state party in beginning to be a player in shaping public policy, and strategies to win constituents.

This group will raise the bar. They recently had a National Debt Party, which was designed to show their fellow students how serious the debt problem is. Their preseident, Derek Reimenschneider, declared the event a mediocre one. After all- they only had 160 students visit, and of that, merely 60 took the World's Smallest Political Quiz. 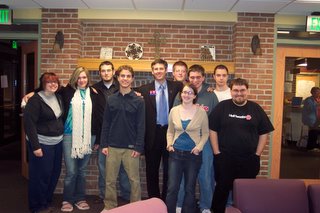 Yeah- I want "failure" of this magnitude! By the way, the event was held on campus, on a Friday night. I remember my own college days. No student organization staged events on Friday nights unless it involved bands and/or copious amounts of beer. This crew did it on the strength of the content alone. Hats' off!

Let us hope that Libertarian economic policies begin to shape Indiana sooner rather than later. I want these students to make Indiana their home upon graduation. It would be a pity to lose them to the Brain Drain that afflicts our state thanks to the economic policies of Democrats and Republicans.
Posted by Mike Kole at 6:04 AM 1 comment: Links to this post

Another Day, Another Smoking Ban

Today, it's West Lafayette. This one comes to us from the Department of Redundancy Department, courtesy of an AP story in the Indy Star:

The City Council gave preliminary approval to a ban on smoking in most workplaces.

Council members voted 6-1 to approve the ordinance on its first reading Monday as about 100 people packed the council chambers.

"This ordinance will do no harm," resident Marshall Crawford said. "The most it will do is inconvenience smokers."

No harm? As a minor side note, could we please consider that it will further erode property rights, as business owners are increasingly told that they cannot set their own policies in their own establishments, as a matter of law? Is that too much to ask? In America?

I am very interested in working with the Libertarian Party of Tippecanoe County to reach out to business owners to let them know that somebody out there is interested in defending their property rights.
Posted by Mike Kole at 5:04 PM 2 comments: Links to this post

Blogcritics Pick Of The Week

I am honored that Blogcritics, an excellent dynamic blog site I contribute to, has chosen one of my recent entries as a Pick of the Week in their Politics category. The item is a re-cap on the trials and tribulations of speaking my mind off-topic on my blog while as a candidate for public office.

Follow this link to the Blogcritics Picks of the Week page.

I have linked Blogcritics on my own blog nearly since I launched it. If you want to know what bloggers across the political spectrum are writing about, there's no better place to check in than Blogcritics.