I've come to a conclusion about a podcast direction. It's going to be a personal thing, and hopefully entertaining to listeners.

I'll call it "This Podcast Could Be Your Life". That's a tribute to The Minutemen, and their great song, "History Lesson, Part 2". I took a great deal of inspiration from them, and specifically this song, over the years for the DIY ethic, and in particular the line, "Punk rock changed our life".

The plan is to simply talk about and play things that are important to me. Old WCSB pal Keith Newman and I share an outlook on great radio- it's personal and at least a wee bit obsessive. People get drawn into the lives of great radio personalities on the basis of the things they can relate to, and to the passion the host has for these things. Howard Stern is my favorite case in point, at least up until he got divorced.

So, I have a minor format that I've been working on. "Minor" because I don't want it set in stone. I like having features that recur, but not every time, and not in a set order.

Big Respect. I want to give a nod to someone important to me in each podcast. The title is a tribute to Mike Watt of the Minutemen. Watt has his own lingo, and when he speaks glowingly of someone, he often says "Big respect to...".

Musical Rediscovery. In going through old radio show tapes and in ripping old 7" records to digital files, I've rediscovered some great music, and want to share it. I'll focus on one artist each time.

Bucket List Report. No, I'm not dying, but I like the concept of the 'Bucket List'. It keeps me focused on goals. When I'm not striving for something, I get listless, so I'm making it an active priority to continuously put some goals out there. The first things I'll cover are travel related.

Radio Days Flashback. Those old radio tapes have some real gems. There was a lot of crap, too, but I'll spare the world and myself, acting like the latter never happened.

Mike Kole Drinks a Beer. Once upon a time, I was a home brewer, and even wrote articles about beer. Sometimes I even got paid for it. I really enjoy craft beers, and have missed beer over the last 8-10 years. Isn't that strange? I'm actually making a podcast as a tool for enjoying a beer once in a while. Well, when I'm a candidate for office, I feel I always have to be 'on', and I never drink. Throw in Lyme Disease, and I really just can't handle very much alcohol, so I've stayed away from it. But I do miss the enjoyment of one really good one now and then, and I've learned how to manage the symptoms of Lyme, so why not bring it in? Sad thing is- and this will annoy my drinking friends- I rarely even drink the whole thing. I get my fill in 4-6 ounces anymore. Go ahead- tell me I'm old. It's cool.

Mike Kole Drinks a Root Beer. Over the past decade, I discovered root beer as a lovely substitute for beer. Plus, with a horrible kidney stone episode in 2006, I learned I had to stay away from sodas with phosphoric acid, which means all colas. No Coca-Cola! I really am getting old. Funny how diet gets shaped by disease.

People In My Life. This will be the best thing. At least, this is the thing I'm most looking forward to: Interviews with friends. I've been taking stock of my friends and family and really getting to how great they are, with fantastic stories to share.

Beyond these, I figure there will be reports on family, travel, hockey, Where's George?, and yes, political opinion.
Posted by Mike Kole at 7:04 AM No comments:

Email ThisBlogThis!Share to TwitterShare to FacebookShare to Pinterest
Labels: Keith Newman, Mike Watt, Podcast, The Minutemen, This Podcast Could Be Your Life, WCSB

I swear, the willful ignorance is growing and growing. There are two ways to balance budgets: increase income, and decrease spending. In any responsible person's personal budget, the first thing one does when the income sags is to cut spending. Not borrow and spend. Cut. Then, after stabilizing the budget, look for other sources of income.

Well, I used the word 'responsible'. So, here comes the 'Chart of the Day' from Reuters.

Oh, I love the one-eye blind preaching in the article:

This chart should be ingrained in the mind of anybody who cares about fiscal policy. The main things to note:

Here's the foil, because one good chart deserves another, and because I care about policy, without taking the belief that all we're spending on right now is good, necessary, and proper: 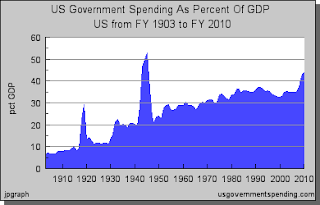 And, using the above Reuter's paragraph as a building block, here's the other side of the coin:

"Federal taxes are spending is the lowest highest in 60 years, which gives you a pretty good idea of why America’s long-term debt ratios are a big problem. If the taxes spending reverted to somewhere near their historical mean, the problem would be solved at a stroke."

So, let's end with an update to their conclusion:

If you were structuring a tax code budget from scratch, it would look nothing like this. But the problem is that tax hikes budget cuts seem to be politically impossible no matter which party is in power. And since any revamp of the tax code budget would involve tax hikes cuts somewhere, I fear we’re fiscally doomed.

Federal fiscal policy goes like this: We're committed to spending, so let's figure out ways to get the money. Why are we committed to spending what we're spending? Anyone have any interest in that? Why are so many elected officials, and worse, pundits, willing to accept that all spending is good, and must, I mean MUST, be underwritten?

This position is the extreme on one end. I'm not the extreme on the other. I'm not saying 'Cut it all!" I'm saying, "Let's cut to the historical mean." That's a moderate position.

Note to my Democratic friends: Look at the spending as % of GDP chart. Remember the Clinton years? You know, the ones that were so glorious, at least as heard told during the 2008 campaign season? What did federal spending do during that shining era of surplus? Yeah. It went down. Then, it went up sharply in the middle of the Bush years, and continued upward sharply into the Obama Administration. Over to the tax chart, you'll notice that taxes went up during the early Bush years, and then down in the middle and into Obama's term.
Posted by Mike Kole at 9:23 AM 4 comments: