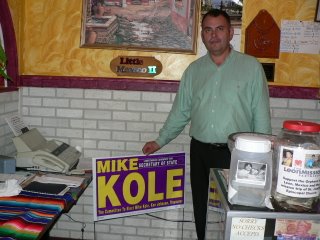 The owner of the Little Mexico II restaurant in Lafayette stands with a Kole yard sign after Libertarians dined there Friday 9/22. We spoke with him about our positions on small business, and in opposition to food & beverage taxes and forced smoking bans. 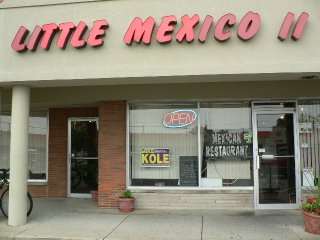 The Kole sign in the window of the restaurant, Sat 9/23.

Big thanks to Randy, and to photographer Dan Church!

A recent check of the Libertarian Party's nationwide candidate tracker still shows the Kole Campaign as the second-most vigorous Libertarian campaign in the USA! Not Indiana, the entire United States.

Bob Smither has a huge lead over me, but with all the activity and press coverage we have lined up for the home stretch, I may catch him yet.

I'm very proud of this ranking. This is a very real and active campaign, that has had me at more public appearances than the Republican and Democrat combined.
Posted by Mike Kole at 9:38 AM No comments:

Sunday, October 8, Bloomington: Fundraiser for Mike Kole, hosted by Margaret Fette and Paul Ehrstein at their home, 1135 N Logan Rd Bloomington, In 47404 . Margaret and Paul throw fabulous parties, and I'm sure this will be no exception. It's a pitch-in, and the suggested donation is $25. I'll look forward to seeing my Monroe County and 9th District friends, as well as others from around the state.

The Purdue Exponent ran an article today on the varying platforms of the three ballotted candidates for Secretary of State. I was especially delighted to observe how the Exponent writer noted how the incumbent has picked up one of my top issues- the gerrymandering of districts- and has tried to make it his own. From the Exponent article:

Mike Kole, the Libertarian candidate, said one of the number one issues for him is gerrymandering ? the drawing of political districts for the purpose of ensuring certain election outcomes.

"Gerrymandering ensures two things for citizens, both of them bad," Kole said. He said it ensures a low voter turnout because the elections are viewed as a foregone conclusion; the outcome is predicted. Without challenges at the ballot box, voters tend not to listen to their constituents, Kole said. (Should read "elected officials tend not to listen..." -MK)

"This is an obvious problem, but neither Republicans nor Democrats want to change the system because each party currently collects a share of fairly certain wins, fighting over just a handful of contested seats," he said.

"Anyone interested in the integrity of our representative government should be calling for an end to gerrymandering," Kole said.

Kole believes that districts should be redrawn to be a more geographic orientation, rather than by majority political party.

"Elections are supposed to represent people that are (in a specific region), that is the point of representation," he said.

"It decreases voter turnout because the public perceives election results to be predetermined," Rokita wrote in his platform.

It is interesting to watch this develop. In 2002, Libertarian candidate for SOS Rebecca Sink-Burris made this her top issue, when she ran against Todd Rokita. He has been in office for nearly four years now, and could have made it an issue at any time, or even put his backing behind Jerry Torr's bill in this year's short legislative session. Instead, he put his weight behind the Voter ID law. Why was the anti-gerrymandering measure not good enough to back strongly when it could have become law, but good enough to tout on the trail? Hmm... Let's leave that as an exercise for the reader to deduce.
Posted by Mike Kole at 9:21 PM No comments:

Email ThisBlogThis!Share to TwitterShare to FacebookShare to Pinterest
Campaign Notes

Today was marked by a trip to Vincennes, supporting Libertarian candidate for Indiana House District 64 JA Thomas, at a League of Women Voters forum. 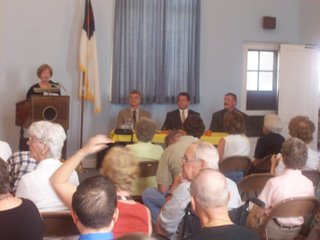 Even though I was not a speaker, I was able to say hello to everyone in the crowd of about 100, including reporters from two newspapers and a radio station. Many business cards were distributed. 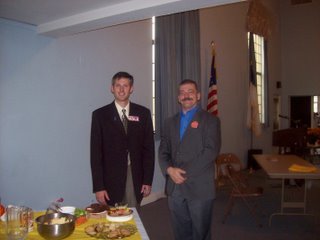 Mike & JA Thomas, after the forum.

After the event, I drove to JA's home to drop off yard signs. We both agree that the purple Kole sign looks very good alongside the red white and blue Thomas sign. It was very good to see so many of his neighbors with Thomas signs in the front yard! 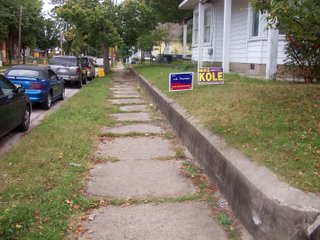 I'll start with the schedule, and then get to the re-cap of the last two days.

Wed 10/4, Vincennes. Libertarian candidate for Indiana House JA Thomas is participating in a League of Women Voters event, and has asked me to be there to take in the event, work the room, and meet the press. I'll do that I'll day long!

Thurs 10/5, Chicago. I know that's Illinois, but the Heartland Institute is hosting its 22nd annual dinner, and a seat at a table was provided for me by former LNC Treasurer Mark Nelson. I will look forward to the opportunity to be introduced to pro-liberty benefactors from around the Midwest, and will extol the virtues of my campaign.

Mon 10/2, Rushville. I was a guest on the "It's Politics" show on radio station WKWH 94.3-FM, with hosts John McCane and Dick Malcom. They surprised me with their depth of knowledge about the functions of the Office of Secretary of State. Since they knew so much, I promised them that I would ably protect the Seal of the great state of Indiana, which brought many laughs. This was the only the second time any media persons expressed any interest at all in discussing the Securities Division and the Business Services Division. Most focus on Elections, which I do like to discuss. When asked what I might possibly do differently, I took the opportunity to point to the recently released Guide For Newlyweds, which is essentially a reprint of a Kiplinger's article repackaged as a brochure. I stated that I would never authorize something like this for two reasons. One, it's fine for the Securities Division to advise the public of scams that are being perpetrated on our people, but it's the job of individuals to seek out education for financial planning on their own. Two, the brochure was produced with funds from fraud case settlements. That's just profane. The money secured in fraud case settlements should be returned to the victims of fraud! Also, to cover the cost of litigating these cases, but that's it. An excellent half-hour on the air.

Fishers. I briefly attended the Town Council meeting in my home town of Fishers, where a proposed ban on smoking at private places of business was to be discussed. I was unable to stay for long as I had Isabel in my care, and she's teething, but I was able to say hello to many bar and restaurant owners, such as Bill Smythe of Claude & Annie's, and to give my support to their position. Very pleasing to see Dan Drexler and Kyle MacDonald of the LPIN office there as well.

Tue, 10/3, Indianapolis. Hamilton County Libertarian Wayne Kirk set up a meeting with MIBOR, the Metropolitan Indianapolis Board of Realtors. Wayne and I attended along with LPIN state chair Mark Rutherford, meeting with MIBOR's political affairs liason Thomas Rector, and government affairs director Chris Prior. This was a very productive meeting, where we spoke about the growth of the Libertarian Party and our role in increasing role in shaping public policy. We asked about MIBOR's legislative interests and answered many of their questions. I am hopeful that this is just the first of many such meetings with professional organizations and associations, and that we will be working together on policy matters in the future.

Big thanks to Wayne Kirk for setting this meeting up!
Posted by Mike Kole at 9:06 PM 1 comment:

Email ThisBlogThis!Share to TwitterShare to FacebookShare to Pinterest
Bell, Bell, & Kole Billboards Up 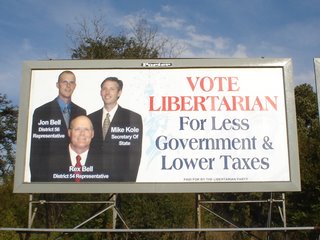 Look for these billboards in Henry, Randolph, and Wayne Counties- then make sure to vote for us!
Posted by Mike Kole at 8:02 AM 1 comment:

I will be on the "It's Politics" show tonight with John McCane, and Dick Malcom, to discuss my campaign. Tune in to WKWH 94.3-FM on the southeast side of Indy, and in east-central Indiana at 6pm. Sorry, no online feed is available.

This John McCane is a Republican, and Malcom is a Democrat. Both were either county chairs, elected officials, or both. They really love talking politics. Sounds like a perfect setting to me!
Posted by Mike Kole at 10:18 AM No comments: