Many thanks to my friend Bob May for putting a great event together. Some 20-25 guys in a party bus from Greenfield to Columbus, and as my great luck would have it, I got to sit on the bus next to Indiana Supreme Court Justice Mark Massa.

Let me tell you- Justice Massa is a big-time hockey fan. We geeked out for about an hour on the old school hockey that drew us to the game- for him, the Chicago Blackhawks of the late 60s and 70s and their greats Hull, Mikita, and Esposito. My first NHL game in 1976 to witness the Cleveland Barons host the mighty Montreal Canadiens. The Blackhawks would take on the Blue Jackets later in the evening.

The reason I was on the trip really was to play one last time. For as fun and great as the event was overall, playing really sucked. It was perfect, though. It erased all doubts about whether or not to stop playing. I mean it had it all- teammates who wouldn't pass if there was a gun pointed to their heads, opponents who would trip you behind the play even though they knew you were hurt, uncompetitive lopsided balance of talent. Yep, I've had my fill of that. It would be so cool to find a league somehow, some way, that was just into the fun of the game. Alas. 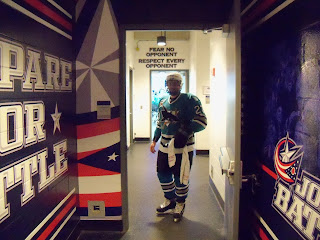 The tunnel the NHL's Blue Jackets players use to get to the ice, behind me. 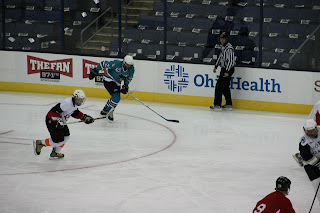 Oh, did we turn it over without a pass? Time to get into the backcheck. 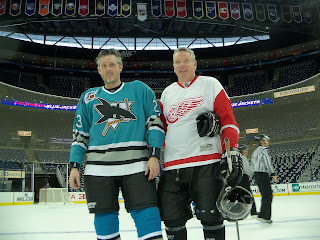 With Phil Partlan after the game, posing at center ice at Nationwide Arena. Phil's one of the good guys- so much so that I give him a pass for a Red Wings jersey.

If you've ever played recreational hockey, you'll love this. What's great about an event with an NHL team? The locker rooms! It's the little things: showers equipped with actual soap, and with both kinds of water; no slime on the floor; heat; adequate space. If you can't score three goals in your last hurrah (I didn't score any), you may as well have the amenities.

My non-hockey luck continued as I got to have dinner with Phil Partlan and Justice Massa, and sit with them during the game. It was a good game, too, as the Blue Jackets gave effort aplenty but came up a goal short. Loads of Blackhawks fans in attendance.

I found time in there to ask the Justice about my own Supreme Court case that was heard shortly before his appointment. With us being friends, would he have had to recuse himself? He said no, that simply playing hockey together is not nearly enough to give the impression of a connection that could prejudice his judgment. It would have been interesting, had he been behind the bench.

And now, to get my back looked at by my chiropractor.
Posted by Mike Kole at 2:49 PM 1 comment: