If two parties come to an agreement in principle in January, it doesn't necessarily mean that the documents have to be signed in any kind of hurry, does it?

Not if the Stadium Authority is involved, apparently. Oh, sure, they'll commission digging half-way to China and piling the soil such that it dwarfs the NK Hurst building (is that intimidation?) before construction season even begins, but sign an important deal that sends a signal of good faith? Bah. Why rush? From John Ketzenberger's Indy Star report:

Optimism ran high after a marathon meeting Jan. 21 between the two sides. The grueling nine-hour session ended with an agreement in principle: The company could stay on the property and would be paid for a 3-acre parcel shared with the stadium, if it agreed to give control of the land to the state.

Emotions ebbed and flowed at that meeting, the first face-to-face gathering since the state filed suit Dec. 30 to take the land. The breakthrough came at mid-afternoon, according to people at the meeting, when stadium authority member John Mutz made it clear the Hursts could stay on the land.

Now it's nearing mid-April, and the huge mound of dirt just west of the two-story Hurst factory is at least triple the height of the brick building's roofline.

I don't know if the Star ran pictures of the mound in the print version (I don't buy the Star because they don't cover Libertarians enough), so here's one of mine, from March 16. Somehow, it doesn't convey the feeling of being there. Oh, that's right- if you take the photo from the other side of the mound, you can't see the building at all. 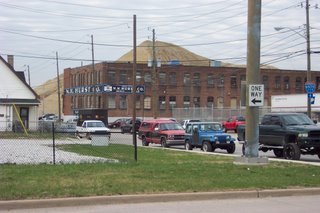 (T)he Hursts got a tour of the site, including a trip to the top of the dirt mound Jim Hurst called Mount Klipsch in honor of the stadium authority's point man, John Klipsch. "I told him that," Hurst said, "and he thought it was pretty funny."

If you can't laugh about it, you might cry. Let's hope this thing ends as it should- on terms favorable to the Hursts. Then let's pray we never see another pointless, ugly eminent domain theft attempt in Central Indiana again.
Posted by Mike Kole at 8:57 PM